Oh, So You Loooove Baby Yoda But You Didn’t Say Shit About Yaddle? Interesting

People these days, they love a Baby Yoda. They cannot get enough of him. This tiny, adorable creature — seemingly engineered with the Pixar formula for big-eyed, big-headed characters that exploits the human evolutionary instinct to keep babies alive — is the talk of the town. Baby Yoda, by virtue of being a 50-year-old baby who is also a member of the same species as Yoda, is probably the most popular celebrity right now that is a tiny fictional alien from a TV show.

And, sure, that’s great, if you’re into that sort of thing. For the amateur fan of the mysterious species to which Yoda belongs, these cheap laughs and ‘aww’ moments are probably enough for you. But for those of us with a more refined palate, there is someone out there far more satisfying. Someone a little more mature, a little more experienced. A name synonymous with grace, dignity, and feminine poise. That name, of course, is Yaddle. 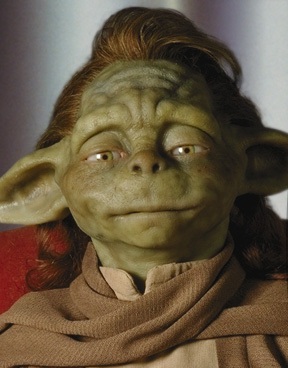 Pictured: The greenest girl in the club looks at you like this wyd?

Mysterious, elegant, and tantalising, Yaddle occupied the edge of the frame for upwards of 5 minutes in arguably the most universally hated of the Star Wars movies, but, further than that, she occupied a place in the hearts of those of us who appreciate a little green bombshell who can wear the hell out of a brown robe.

I guess it’s ‘fashionable’ these days to stan a child Yoda. I guess it’s somehow no longer ‘cool’ to be vaguely sexually attracted to a 500-year-old alien frog puppet from a 1999 children’s movie. I guess in this throwaway culture we live in, we will gladly ditch a green alien goddess from the prequel trilogy in order to stan a robed alien infant that is older than Dave ‘Hughesy’ Hughes.

Is Yaddle’s almost nonexistent role in the franchise memeable? Not easily. Does her completely silent, expressionless performance in the brief moments in which she is visible lend itself to a plethora of reaction GIFs? Very much no. Has she made us laugh or cry, or taught us a lesson? Again, no. Truth to be told, on paper, Yaddle offers almost literally nothing to the Star Wars universe, except confirming that Yoda’s species is (at the very least) sexually dimorphic, and that they are capable of growing a full head of hair.

This saucy little tridactyl troglodyte might not have done anything cool, or even said anything at all, but for the connoisseur, Yaddle offered all of the power and wisdom of Yoda in a wrinkly puppet body that wouldn’t quit.

We might live in a culture that only remembers things as they happen until our attention is dragged away by the next viral video of a penguin that has learned to tapdance, but now, even 20 years later, when it comes to Yaddle, we are forced to stan.