Tony Abbott, Weirdo, Is Leading A Lib Social Media Campaign Purely About Him

Despite the fact most of the country thinks he’s a strange moron who should retire from public life and dedicate the rest of his existence to doing charity fun runs, Tony Abbott continues to do his thing. His latest thing, as it were, is announcing that he plans to lead the Liberal Party‘s social media strategy, leveraging his large online following to do… well, who knows.

The Australian reports today, via their direct line into the strange brain of Tony Abbott, that the former prime minister will “direct a Liberal Party social media campaign mach­ine” with his 450,000 Facebook followers, with the intention of building a right-wing version of GetUp activism.

For the record, it seems like every week that a right-wing alternative to GetUp is announced, and it never works because it’s always backed by either rich guys or weirdos who forget that the key to running successful campaigns is actually organising normal people. Tony Abbott, the weirdest man alive, probably won’t be able to do this either.

“It will be seeking to mobilise Liberal Party supporters, which are a significantly larger group than Liberal Party members, to get active in campaigning,” Abbott told The Australian.

The website for Tony’s campaign is live now, and it is named after his book Battlelines. For a general Liberal Party push, it certainly seems to be very focused on Tony.

In fact, the ‘about’ page is also just about Tony as well. 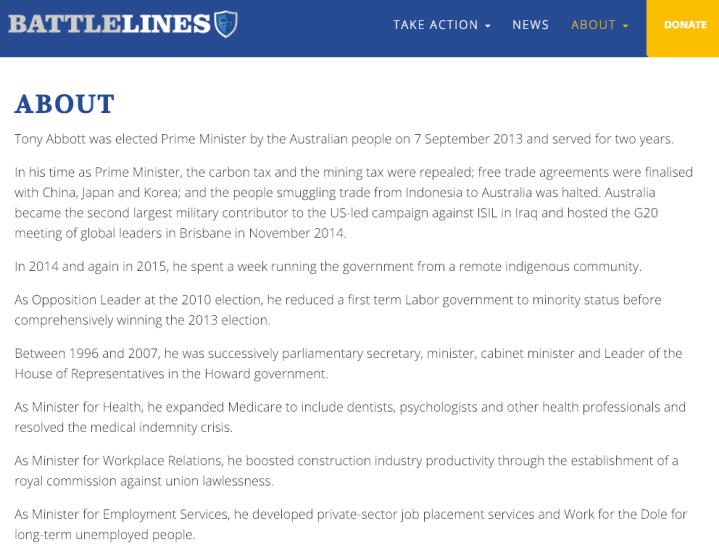 You know what? This whole thing might just be about Tony Abbott! That’s crazy. Surely not.