Three men have been charged over the alleged assault of two teenage girls in Sydney’s Pyrmont on Saturday, the night of the Mardi Gras parade.

A friend of the young women shared phone video footage of the alleged assault to Instagram on Sunday, describing how the men had “brutally beat[en]” them.

The video appears to show the men pushing, punching and kicking the women, even as they and their friends shout for them to stop. At one point a man appears to pull one of the women by the hair over a ledge, before she’s tackled to the ground. 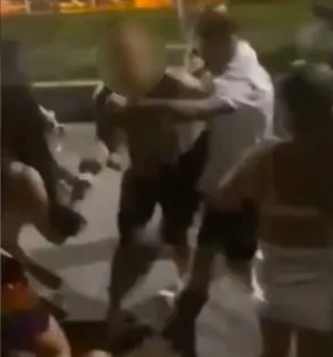 The poster wrote that the young women intervened when the men were “having a go” at some of their male peers.

“Before we started recording the men pushed first,” she wrote. “When we tried to remove ourselves from the situation they came after one of the girls dragged her by the hair threw her off the concrete ledge then continued to jump and stomp on her head.”

The poster concluded by writing that she couldn’t express just how much the incident had impacted them, calling it “the worst thing any of us have ever had to see”.

She added that the alleged victims are “two of the strongest girls going”. 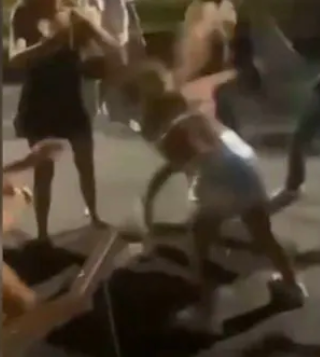 One of the women in the group wrote on her Instagram Stories this morning assuring people that “everyone is ok and safe and no one is seriously injured.”

“To say a cowardly act would be an understatement – I’ve never seen such disgraceful footage,” he said.

“Someone’s 16-year-old daughters were out, and for them to be assaulted in such a way is appalling.”

The men were arrested in Pyrmont shortly after the alleged assault by Sydney City Police Area Command, with the help of the Public Order And Riot Squad, police say.

The men were refused bail and are due to appear at Central Local Court on Tuesday.