The Most Legendary Modern Muses

The great rock stars, artists, designers and filmmakers make fascinating subjects for discussion, but often times the ones responsible for inflaming their creative fire are fascinating in equal measure. The great muses in history are nearly as notorious as the celebrities who were so enamoured with them, and we are taking a look at the Most Legendary Modern Muses for this edition of our weekly series Ray-Ban Legendary Lists, in honour of the 75th Anniversary of the legendary lens-makers. Such is the breadth of this particular topic that we had to set the parameters somewhere, and so we went for female muses only. Our apologies to Tim Burton’s muse-of-choice, the always inspiring

PATTIE BOYD We start with one of the all-time rock and roll muses, Pattie Boyd. The model and photographer with an extraordinary wide-eyed allure was at the centre of one of the most famous love triangles in pop music history. She met Beatle George Harrison in 1964 on the set of A Hard Day’s Night in which she was playing a tiny part as a schoolgirl Beatles fan and the two got married in 1966. Harrison wrote “Something” for her – one of the Beatles’ most romantic songs (and there’s a shitload to choose from).

In the late ’60s the pointy wedge in the triangle was formed after Harrison collaborated on various projects with Eric Clapton who fell in love with Pattie and, famously, wrote the song “Layla” about her – probably one of the greatest songs about unrequited love ever. Later, Pattie and Clapton were married after her divorce from Harrison. It’s been said that in the ’70s she had an affair with Rolling Stone Ronnie Wood before her divorce to Harrison – and Mick Jagger was supposedly in love with her too. As far as Muse Pedigree goes, it’s hard to to top that. 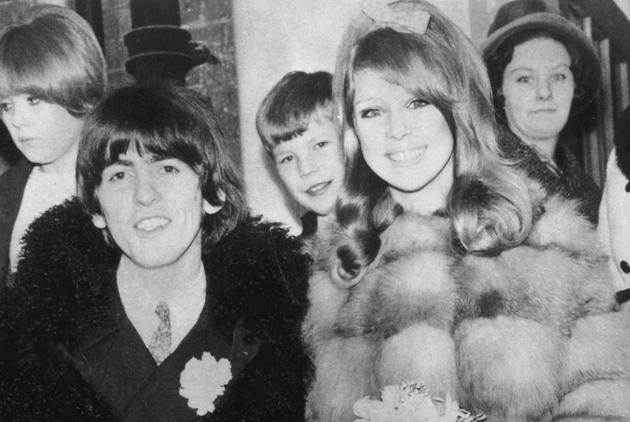 YOKO ONO If you require an introduction to avant-garde artist, activist and uber muse Yoko Ono you need to get out more, son. There are a few different versions of how the legendary romance between she and John Lennon started, but my favourite is the story that Lennon was introduced to her through London gallerist John Dunbar who was exhibiting Ono’s work. On the opening night she walked up to Lennon and put a card in his hand with the word breathe written on it. The rest (a prompt controversial divorce, a bed-in, collaborative recordings, “breaking up the Beatles”, drug charges, a separation, a son) is history. Lennon wrote many incredible songs for or about Yoko including “The Ballad of John and Yoko”, “Jealous Guy”, “I Want You (She’s So Heavy)”, and “Woman”.

PATTI SMITH Of course Patti Smith is an important, hugely influential talent in her own right as a musician, poet and artist, but she also played muse and model to photographer Robert Mapplethorpe. Their epic romantic and artistic partnership has almost a mythological status in New York City folklore. They lived together from 1967 until the mid ’70s, during which Patti worked in a bookstore, busked on the street in Chelsea and created art with Mapplethorpe, posing as one of his most memorable early subjects. They continued to inspire each other and continue their artistic collaborations, even after he realised he was gay. They remained close friends until Mapplethorpe died in 1989. 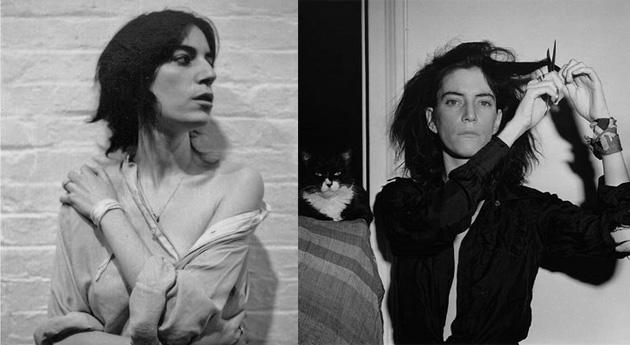 “GALA” Gala Dali is the definitive muse of Surrealism. Born Elena Ivanovna Diakonova but known simply as “Gala”, she was the wife and muse to Paul Eluard, the French poet who was one of the founders of the surrealist movement. Gala famously inspired many of the central figures in the movement, including Andre Breton (hello Breton stripes!) and the brilliant German artist/poet Max Ernst with whom she and Eluard lived in a proper menage a trois arrangement for three years. Surreal. During the marriage Eluard started to mentor a promising young painter named Salvador Dali, whose wacky seductive charm and moustache-twirling ways quickly became the object of Gala’s intrigue. Gala got married to Dali in 1934 and was an enormous inspiration on his art, often depicted in religious roles like in the famous “The Madonna of Port Lligat”, and he even started signing his work with his and her name. There’s no better signature of a legendary muse than active and absolute obsession.

ANNA KARINA The ridiculously photogenic Danish beauty started out as a model, working with French designers Pierre Cardin and Coco Chanel, before meeting one of the definitive auteurs of the French New Wave, Jean-Luc Godard. Godard first met her at an audition for À bout de souffle (Breathless) for a part she turned down because it required nudity. He was so enchanted by Karina he cast her in eight of his movies including A Woman Is a Woman, Vivre sa vie, and Alphaville. They married during the filming of A Woman Is A Woman, later divorcing in 1967, but not before creating some of the most enduring images of La Nouvelle Vague.

LEE MILLER Once a successful fashion New York model, Elizabeth Lee Miller is an acclaimed photojournalist and fashion photographer, but she is perhaps best known as the muse and lover of Man Ray, iconic surrealist artist and photographer. Lee lived with Ray in Paris, working as his photographic assistant while studying photography under his direction. When she ended the relationship Man Ray was destroyed and in the following years produced many works that alluded – directly or indirectly – to their love affair, such as his famous oil painting “A l’Heure de l’observatoire: Les amoureux” (“Observatory Time: The Lovers”) which focuses on a large rendition of her lips. While Man Ray is the better known name of the pair, Miller, who worked with American Vogue for years, produced some incredible portraits of famous artists including Picasso, Joseph Cornell and Max Ernst. 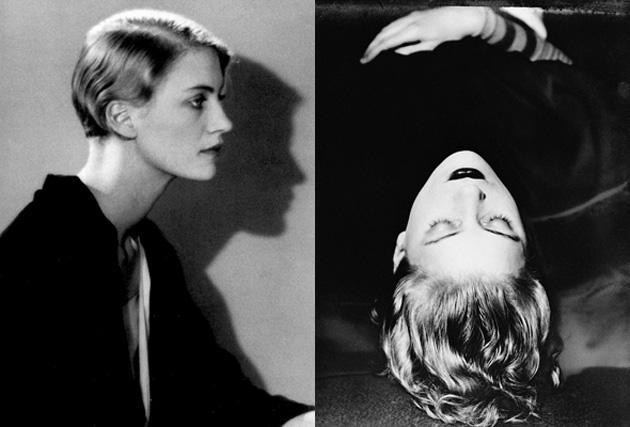 Both photos are of Lee Miller by Man Ray

THE SELF Why seek inspiration outside from outside muses if you are the most fascinating subject you know? Two artists who have become their own muse are Frida Kahlo and Cindy Sherman, both highly acclaimed talents who’ve been prolific in their renderings of themselves.

Mexican painter Kahlo is best known for her rich surrealist self-portraits, while Sherman’s oeuvre comprises a more conceptual style of self-portraiture in which she meticulously creates characters with makeup, hair styling, costumes, using herself as the model each time. Is there anything ballsier than putting yourself into a work to be critiqued, criticised and entirely exposed? This makes their work all the more provocative and inspiring. 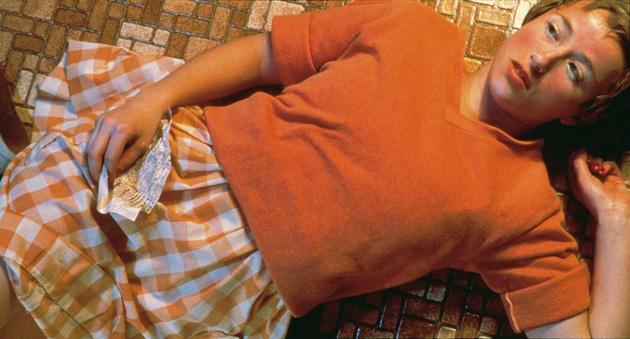 Photo of “Untitled #95 by Cindy Sherman

SOFIA COPPOLA Her introduction to the film industry was a curse – a nepotism enabled and universally panned performance as Mary Corleone in her father Francis Ford’s, Godfather III. The only way was up. Coronated as the third woman in history to be nominated for a Directing Oscar (and the first from America), an Oscar winner for Best Original screenplay and a recipient of the prestigious Gold Lion award at the Venice International Film Festival, Coppola’s work deals with themes of youth, fragility and beauty as seen through the droll minutiae of daily human life. All qualities seen in the 41 year old filmmaker by longtime friend and designer, Marc Jacobs. Coppola, whose fashion credentials include an effortlessly tailored, sometimes boyish, always understated personal style informed by her new home in Paris, France and a cult Japanese womenswear label called Milkfed, fronted the designer’s washed out 2002 fragrance campaign shot by photographer Juergen Teller. “Young and sweet and innocent and beautiful. The epitome of this girl I fantasise of,” he would later remark of his muse. We couldn’t agree more.

EDIE SEDGWICK Vivacious. Magnetic. Tragic. The proto “It Girl”. An actress, socialite, model and heiress best known as a key member of the Warhol Superstars, a rambunctious NYC artist collective (which also included part-time Velvet Underground vocalist Nico) which spent the majority of their time producing experimental short films and artworks. Following a falling out with Warhol, Sedgwick would relocate to the Chelsea Hotel where she met singer Bob Dylan.

A romantic relationship would ensue, as would his classic 1966 album Blonde on Blonde and hit singles “Like a Rolling Stone” and “Just Like a Woman”, all said to be inspired by or written in Sedgwick’s honour.”Her fog, her amphetamine, and her pearls…” Dylan would observe in the latter, a succinct and ultimately crushing seven word summation of a woman who possessed everything – wealth, fame and beauty – but who struggled withanorexia, depression and drug and alcohol abuse for much of her adult life. She tragically passed away from ethanol intoxication at just 28 years of age. Would posthumously serve as muse as the subject of 2006 biopic Factory Girl.

JUSTINE FRISCHMANN Frischmann is like the Pattie Boyd of Brit-Pop. In 1989 she founded the band Suede with Brett Anderson who became her lover. She stayed with Anderson but left the band to form her own outfit Elastica, the band she’s probably best known for. Toward the end of the ’90s, while she was still in the long term relationship with Anderson, Justine fell for Damon Albarn of Blur, leaving Anderson and breaking his heart. She later broke Damon Albarn’s heart too, inspiring most of the band’s sixth album 13 including the song “Tender”. That alone is enough to make the list: it’s a song that every person on earth probably wishes that they had inspired.