Hordes of unkempt sewer people with webbed hands/feet, poor hygiene and solid placard game emerged from the subterranean shanty towns they call home last week and gathered in cities across the country to unite in protest against the Abbott government’s apparent mistreatment of feral people.

The placard wielding spawn of the one true lizard king gathered surface level in Brisbane, Perth, Adelaide, Melbourne, Sydney and Hobart Sunday as part of the nationwide March in May rallies designed to oppose a contentious federal budget which has since eviscerated Mr. Abbott’s approval ratings.

After largely relegating their coverage of this year’s March in March protests (the one attended by some 80,000 people across the country) to a couple of blog posts, most notably the one in which opinions editor Tim Blair dismisses the movement as a “small pods of malcontents…in some kind of protest against Tony Abbott,” The Daily Telegraph elevated its sequel to front page news this morning, affixing today’s edition with the toxic front page headline, “The Ferals Are Revolting”. 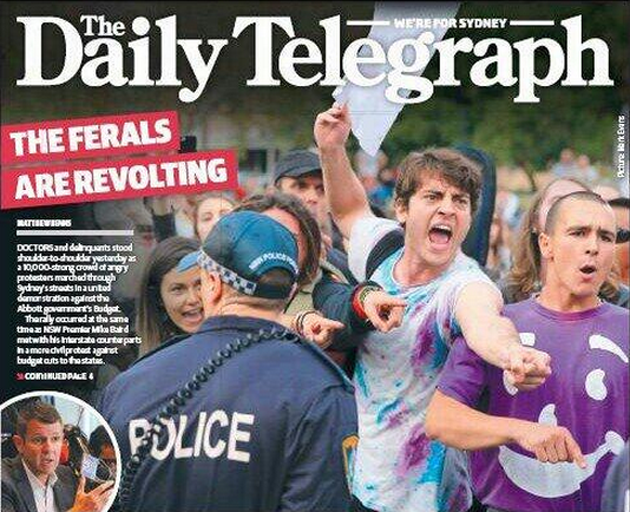 If you can’t quite make that lede out, it reads “Doctors and delinquents stood shoulder-to-shoulder,” an entirely fair, balanced and accurate way to describe the tens of thousands of participants of the march which included toddlers, the elderly, former politicians, and, yes, evidently, twenty-something year old dudes wearing purple tie-dye t-shirts. Yes, these are the people we should be demonising.

I think it’s safe to say that nothing is as revolting as that headline.

In related news: News Corp has obtained shocking CCTV footage of the protesters in action (I think one of them has a tail!)…