Hi guys. My name’s Tara and I’m a director at SF, and with the help of an amazing team, book the lineup every year. I’m also the one that provided the comment to our Facebook moderator above.

I have been a part of the electronic music scene for ten years and worn many hats in that time. I’ve been a DJ, producer, event manager, touring agent, and festival director. Yes, there are more men in this industry than women – it’s something I have been coming face to face with on a daily basis for years. More often than not, I sit in meetings where I am the only woman. I have even had the pleasure of enjoying moment’s where artists I have booked to play figure I must be backstage because I’m “some dude’s girlfriend”.

So am I surprised that there are people here that are concerned about gender balance in the music industry? No way. What I have a serious problem with is the immediate accusation that we deliberately ignored females ‘because it’s too hard’ to do otherwise, or that we deliberately booked only men. If that were the truth or even close to it, I’d have so much trouble sleeping at night I’d have quit this game a long time ago.

In fact, to be told that I am now part of the problem, is probably the biggest insult I have ever received in my career.

What’s our selection process in choosing acts? Pretty simple. We like their music, they are available and interested to play at the festival, and we can afford to make that happen on their terms.

It would be nice if booking a line-up was as simple as emailing everyone you wanted to be on it, them saying “Hells Yeah!” and then jumping on a plane. The reality, is just a touch different. We spend months working well beyond your average working week exploring options, enquiring, pursuing, negotiating, adjusting offers and to be completely blunt being rejected much of the time. The competition to book acts in this country is beyond fierce, and there are many factors that can quash a desire to book someone. Physical distance from the rest of the world, the fact that many acts either don’t want to make such a long trip or will do so only once a year, the fact that it will often only be viable if you can organise a national tour which is obviously dependent on venues and promoters in other cities, the size of the group the artist is in, and all the associated visas, accounting, and accommodation fees associated with catering to that. If you didn’t realise that, fair enough, now you know.

If we were the despicable biased organization you seem to believe we are, we would have just deleted your post and blocked you. We wouldn’t have taken the time to write a first response, and I sure as hell wouldn’t be exposing all my personal details on Facebook to write to you now. The truth is that GENDER BIAS PLAYED ABSOLUTELY NO PART in the decisions made. When I picked it, I was using all the means available to us to try and share music I enjoy with others. To apologize for that is to disregard the hard work and honest passion that myself and others put into every single day.

I’m not asking you to know everything about booking acts or running a festival, but next time, it would be pretty dope if you could air your feelings as a question or concern for us to answer, rather than a series of brutal accusations in a public forum against someone you probably didn’t realise is just another female trying to make it in this industry.

This debate could go forever, so now that I’ve cleared up our motivations from the source, I’m going to go back to trying to put on an amazing event for you all – peace.

EARLIER: Strawberry Fields announced their first release lineup a few days ago, and it left a fair few punters disappointed.

It might have something to do with the fact that every single act in the first announcement is entirely, unequivocally, 100% male.

Only 15 of the touted “150 local and international artists” have been announced – though the fact that they’re all men doesn’t bode too well.

For all ye non-bushdoof goers, Strawberry Fields is a three day festival that has been held annually since ‘09. It goes off in the rural town of Tocumwal on the Murray, and on their website they describe the November festivities as a “celebration of art, sound and creative expression … bring[ing] you a diverse selection of both renowned and breakthrough electronic music from both Australia and overseas.”

That ‘diversity’ was brought into question on Friday by Facebook user Kate Pern, who posted the following meme to the festival’s page (accompanied by the deliiiiiiicious pun, “Strawberry Fieldora”, no less): 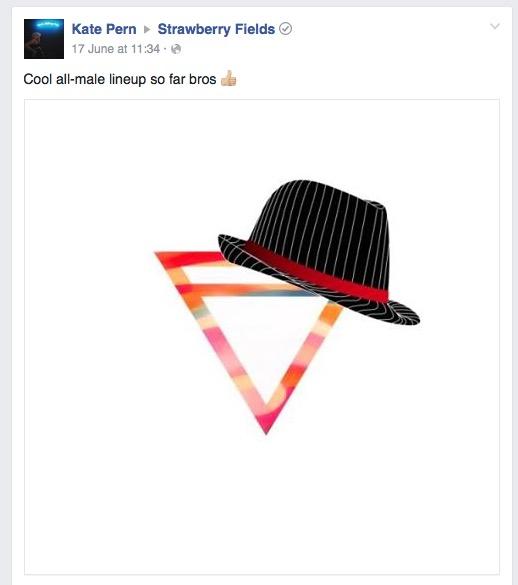 Since posting, Pern’s seemingly innocuous meme has been liked 270 times, and has opened up a discussion about the diversity (or lack thereof) in the festival scene that not even she had anticipated – with both Strawberry Fields and the festival’s director, Tara Benney, taking to the ‘book to try and set the record straight: 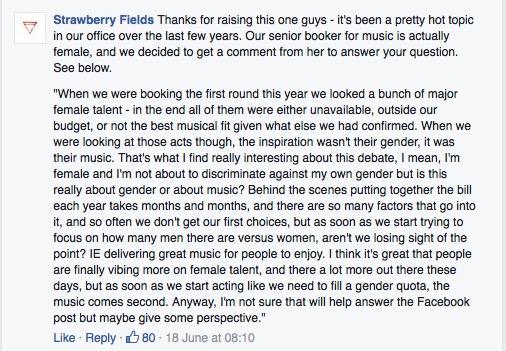 Speaking to PEDESTRIAN.TV, Pern explains that she originally took to the festival’s Facebook page out of “frustration” and that she “wasn’t expecting a direct response from the director of the festival.”

“I was really appreciative that she responded to me personally, but I felt really uncomfortable with the way [the social media manager of the SF Facebook page] kept on pointing out that the senior booker for music was a woman – as if that completely invalidated my points.”

Pern went on to point out that attributing the thus-far all-male lineup to ‘merit’ is highly insulting and downright naaaaaht true:

“The music at Strawberry Fields is mostly electronic, it’s very diverse,” explains Pern. “Which is one of the reasons why I’m a bit skeptical when they say that they tried to book female artists but got turned back by them all. You could understand that if it’s a niche festival – but [SF] plays so many different genres of music, so for me for them to have not been able to find any talented women who are available across the wide range of genres – I just find that really hard to believe.”

Pern is adamant that her post was not intended as an outright attack of the festival or its organisers, but rather as a conversation starter. “I don’t think that they hate women, I know they don’t. I think it’s just bit of naivety on their part and not really being up with the expectations we have of events in 2016.”

An eerily similar discourse went down only last week when the lineup for Canberra festival Spilt Milk was revealed to be entirely made up of male artists, save for Vera Blue.

A storm was well and truly kicked up and as a result, festival organiser Kicks Entertainment released a statement ensuring that more women would be added to the bill.

“Expect to see announced more female artists that we are really excited to have as part of Spilt Milk;” they said in the release. “Some of whom we had booked prior to our first announcement, some of whom we were considering booking and now have, and some of whom we discovered and booked as a result of the discussion around this issue.”

And if Strawberry Fields needs a little inspiration when it comes to finding female talent, this list of some of Pern’s favourite non-male electronic artists might be a good start: