Since April last year, 540 incidents of anti-Asian racism related to the coronavirus has been reported to the Asian Australian Alliance (AAA). But the real number is believed to be much higher, after the organisation found that 90 per cent of incidents go unreported to authorities. I repeat: ninety per cent.

Over the past year, we have witnessed hate towards the Asian community surge, exacerbated by the former President of the United States referring to the pandemic as the ‘China virus’, repeatedly.

It’s damaging rhetoric like this which emboldens people who already harbour prejudices against Asians to act on them. But this was never just an American problem, and shouldn’t be viewed as such.

The COVID-19 Racism Incident Report, collated by AAA and research fellow Osmond Chiu, found that 37 per cent of survey responders experienced racism on a public street, sidewalk, or the supermarket since April last year. Sixteen per cent of people copped verbal threats, 13 per cent were spat/sneezed on, and 12 per cent were physically intimidated.

But again, the report stressed that the true number of racist incidents experienced over the last year is likely much higher as the survey found that nine in ten incidents go unreported to authorities. 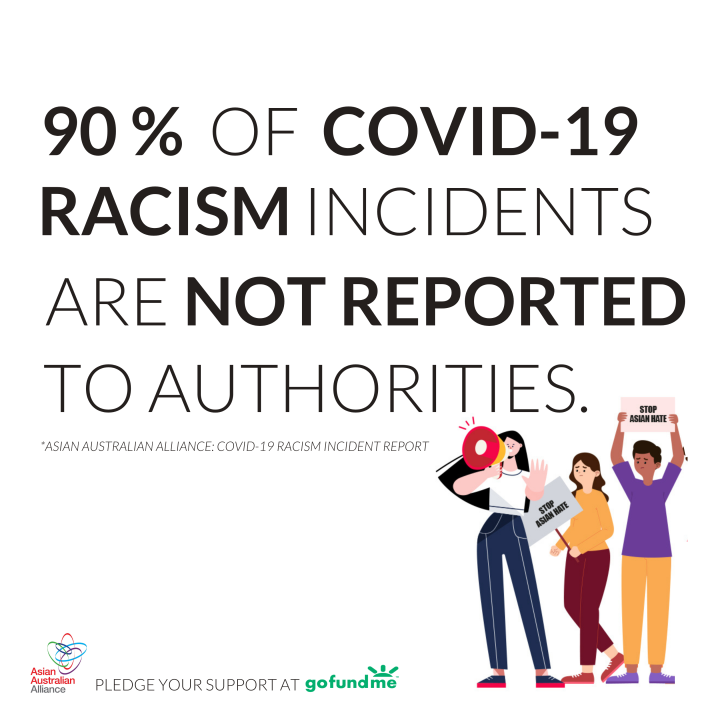 “I vividly remember down the road from me the fucking lunatic cracking his bullwhip outside the Chinese embassy [in Camperdown, Sydney] and just spouting vile hatred,” Asian-Australian actor and Crazy Rich Asians star Remy Hii told PEDESTRIAN.TV.

“And the two Vietnamese girls who were attacked and spat on in Marrickville.”

It’s why the actor has pledged his support to the Stop Asian Hate Australia movement.

Unveiled on Wednesday by the AAA and GoFundMe, the movement is here to make noise – lots of it.

“The stories that I mentioned, they’re horrific and they’re really shocking, but they’re just the ones we know about,” Remy said.

“We can’t stop what we don’t know about, so I think it’s just so important to know that you have a voice and that voice matters.”

There is no one answer as to why the number of unreported incidents of COVID-related racism is so high in Australia. It could have something to do with the model minority myth where, as Remy said, “you just keep your head down and you don’t speak up”, or it could be fear.

“Whenever you put yourself out there to speak up against racism, you always find that there are going to be people who push back,” he said.

We laughed about this, actually, because after Remy posted on Instagram in solidarity with the #StopAsianHate Australia movement, it didn’t take long before someone posted a racist and quite frankly lazy comment on his post.

“I think it’s really important to see that it is out there, because there’s a lot of people who are very hesitant to even admit that racism is in Australia,” he said.

“And again, this goes back to 90 per cent of people not feeling safe enough to speak up.”

Racism isn’t always overt though, it can rear its ugly head in the form of a ‘joke’ or a microagression – and sometimes that makes it harder to call out.

According to the same incident survey from AAA, 22 per cent of responders said the perpetrator made racial slurs as a joke.

“When something is put as a joke I find the best way to handle it is to ask: ‘Why is that funny?'” Remy said.

“Put the question back on the person who is making the joke to realise that actually it’s not funny to make light of someone’s skin colour, where they come from, or their accent.”

It’s steps like these that go towards enacting positive change in the wider community.

The #StopAsianHate Australia campaign has already raised more than $10,000 on GoFundMe, and counting. Money raised will fund legal support for those facing discrimination, ongoing advocacy and awareness, organisation of events, workshops and mentoring programs, and support Indian-Australians attempting to return home after the recent travel bans.