As a child, sitting on someone’s knee probably meant being told a really good story and feeling warm + loved, and is no doubt what the Australian Museum in Sydney were going for.

However, their director Kim McKay described their new Great Barrier Reef / virtual reality show narrated by Sir David Attenborough as like “literally sitting on David Attenborough’s knee,” and if that doesn’t conjures visions of getting spanked by Daddy then you have not internetted hard enough.

FYI this is a casual shirtless gif we found of him in his earlier days:

In a statement, the museum said that visitors will strap themselves into a Samsung Gear VR headset and “travel through time and deep in the ocean, experiencing the natural world in brilliant, 360-degree cinematic life.”

“[It] uses real-world footage and a host of pioneering technologies to shed new light on this magnificent habitat. Visitors will take a 360-degree, virtual reality tour deep beneath the waves, with Attenborough as a personal guide through the vibrant corals, darting fish and deadly sharks in the great natural wonder of the world.” 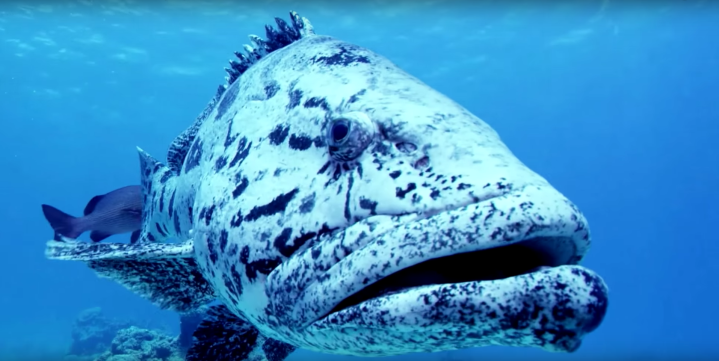 It ends with Attenborough calling on people to act to save the Great Barrier Reef, which is right now living through its worst ever bleaching event and under enormous strain.

Quite aside from this GBR gig – which sold out its London show, btw – the museum has a second, VR / Attenborough film showing.

Called ‘First Life‘, it travels back 540 million years to the dawn of life on Earth and no shade sounds like an absolutely wild ride.

Ancient oceans and extinct sea creatures in VR CGI? Come at me ‘Borough.