That’s right folks, billionaire Republican front-runner Donald Trump is in the news again after intrepid internet Indiana Jones unearthed a blog he did on the Trump University website, revealing to no one’s surprise that he has been an out of touch megalomaniac pretty consistently for at least a decade.

The blog has also brought to light a bunch of opinions that seem to contradict positions he’s adopted since joining and subsequently dominating the Republican party, including expressing support for Obama and Hillary and outing himself as a gay marriage advocate (shock, horror) in 2006 via this delightful snippet in support of Elton John‘s wedding with David Furnish: 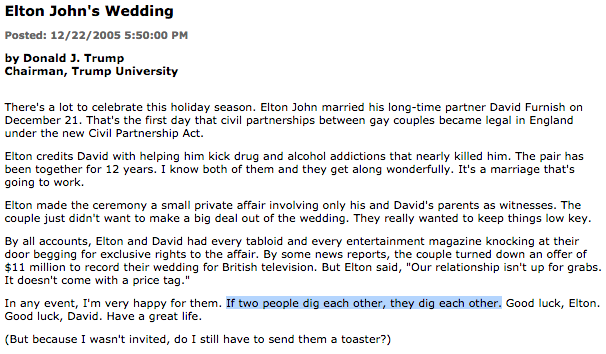 Donald, that is so true. He has since publicly expressed his belief in “traditional” marriage (ew), indicating that he maybe now thinks if two people dig each other, we should check if they are gay or not before we let the state recognise that.

Other gems include making fun of Keith Richards for naming his daughter “Dandelion” a mere 6 months before he named his own child “Barron” (a perfectly ordinary, normal name that a normal person would have) and crediting Tiger Woods‘ success to his sense of style, not his ability to sink “a little ball in a little hole again and again” (which is fair enough, people go wild for polo shirts).