In terms of their personal and professional politics, US President Donald Trump and Canadian Prime Minister Justin Trudeau could not be more different.

However, since a shit-tonne of Canada‘s exports go to the US – these two blokes need to get the fuck along. So, Trudeau went to the White House and met with El Trumpo.

All of the photos look very civil and friendly, so it seems as though all is well. Well, sort of.

Everyone knows that Trump’s fave power move (is it still a power move if everyone knows it, though?) is the whiplash-inducing handshake, where he randomly and violently pulls the arm of his handshakee as if he wants to rip their arm off. Apparently he reckons it’s some weird alpha masculinity thing, that he believes asserts dominance.

He basically caused nerve damage in the arm of Japanese Prime Minister Shinzo Abe recently, with this monstrously inappropriate move:

But hell no – Justin Trudeau wasn’t putting up with that shit.

The bloke had very clearly prepared for Trump‘s move when he rocked up to the White House. He VERY firmly held Trump‘s hand, and held it close to his body for leverage, then placed his other hand on Trump‘s shoulder, essentially making it completely impossible for him to pull him at all.

However, all people can focus on is this second handshake later in the day; a camera captured the exact moment that Trudeau looked down at Trump‘s hand, and seemingly thinks (we can only assume):

“Fuck, not this shit again.” 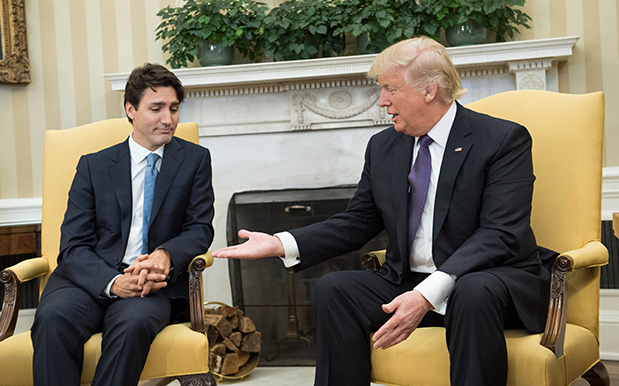 Trudeau contemplating whether to shake hands with Trump and become a meme or not… pic.twitter.com/XBK7sAFkKH

“C’mon dude, don’t leave me hangin’!”
“No. I know where that hand has been!” pic.twitter.com/vgbKFAeb3G

Showing #Trudeau all the cool stuff he has. #TRUMP pic.twitter.com/PdZUm1hFhQ

Justin Trudeau is all of us. pic.twitter.com/su2ixX6DDe

seeing Trudeau go from being full of love to full of disappointment is heartbreaking pic.twitter.com/gNduUEwsqd

Justin Trudeau is looking at Trump’s hand like he just read the Russian Dossier pic.twitter.com/XGpGF7O7LG

Trump: Look at the size of that. Just look!
Trudeau: I’m seeing it.
Trump: Are you seeing this?
Trudeau: I am in fact seeing it.#leadership pic.twitter.com/YS35sItFY2

You know that feeling when you just literally cannot figure out whether to laugh or cry? That. That’s what he’s feeling.