Dealing with airlines is notoriously difficult. Flight mysteriously cancelled and you need a wee bit more information? Not a chance! Luggage gone missing and the only garments you have for your three-week Mediterranean holiday are the stanky clothes on your back? Go fuck yourself and hit Zara! Well, one Redditor claims they literally clowned Jetstar into giving them their money back after the airline changed the time of their flight.

The user shared the honking good story in r/Australia.

“Jetstar amended the timing of my flight that I was never going to make,” the post read.

“To get a refund they told me to supply documentation providing proof that I couldn’t make it so this is what I gave them — I got the refund!”

What was the documentation, you ask? Why it was none other than a letter from a company called Clowns Are Us with this photo as the letterhead. 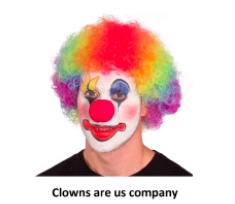 A bit of context: the Redditor claimed Jetstar said they could get a refund or accept the new departure time when it informed them about the time change. As they weren’t going to make the flight regardless of the time, the poster thought they’d milk the situation and try getting their money back.

When the Redditor emailed Jetstar advising they couldn’t make the new flight, they claimed the airline asked for proof. Something that’s important to note is the departure time only changed by five minutes — a detail the poster claimed they didn’t know before contacting Jetstar.

The Redditor said they thought it was “a bit jack” that Jetstar asked for proof, “considering they were the ones making the changes”.

Thus the clown letter came into fruition. In the letter, the writer posited a refund was required on the flight as the passenger was Clowns Are Us’ best clown, and they had to perform at clown shows in both Darwin and Adelaide at specific times.

One Redditor commented asking why time was being measured in litres, to which the original poster replied: “Because I’m a clown”, which is completely valid.

The letter was signed off by Clowns Are Us chief clown Bilbo Daggins, a name I absolutely want engraved on my tombstone. 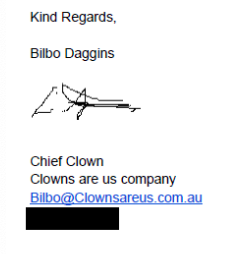 Another highlight of the letter was that it included the following caveat:

The Redditor explained why they had to include this extremely professional seal of approval.

“After sending him my first letter from Clowns Are Us he said that it had no schedule and that it had to be a valid document,” they said.

“I updated the document and asked what makes it a valid document.

“He didn’t really have [an] answer for that haha.”

Ain’t that a honk on the nose.