George Christensen, Who Loves Going To The Philippines, Is Having A Shit Week

Nationals MP George Christensen is not having a fun Easter.

The Queensland representative has faced a week of media stories surrounding his 28 trips to the Philippines since 2014, how he managed to pay for it all, and what he missed in Australia while he was off gallivanting through Southeast Asia. It’s all been a bit of a mess for ol’ George.

Last year, reports revealed Christensen had spent more time in the Philippines than in Parliament House for two years running between 2016-17. The Australian Federal Police even approached Christensen, but declined an investigation as there wasn’t enough evidence that he had committed any crime.

For his part, Christensen has always claimed this was all a smear campaign, only traveling on his own dime to see his fiancé – who lives in the Philippines – and to do charity work. But that hasn’t stopped the media from digging in to the finer details of his travel.

On Wednesday, the Sydney Morning Herald reported that Christensen had spent around $3,000 on domestic flights to capital cities that then connected with trips to the Philippines. It forced Christensen to plead innocence, with the MP immediately forwarding his expenses to the independent parliamentary watchdog.

“I am absolutely confident that the travel was undertaken within the rules,” he said in a statement that was released in two different fonts and definitely wasn’t copy and pasted from an email.

Later in the day Christensen deleted a tweet from 2017 that criticised MPs for using taxpayer money on personal trips. Why? Because he was in the Philippines when it was posted. Awkward! 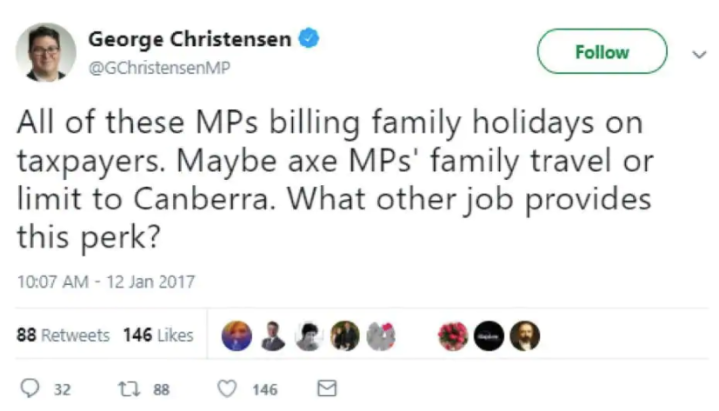 All in all, not a great Wednesday.

On Thursday morning, having taken up much of the media coverage for the day prior and distracted from his government’s election campaign, Christensen was in the news again.

The Sydney Morning Herald revealed the MP had skipped almost a third of the public hearings in to the 2014 parliamentary inquiry into boosting northern Australia’s infrastructure and economy. An important thing for a Queensland MP to be across, you’d think.

Surely, no one is hoping the long weekend comes faster than George Christensen.