Formula One Gets Up To Speed, Axes ‘Grid Girls’ From All Grand Prix

Female models prancing around the grid in godawful, heavily-branded outfits before every grand prix is now a thing of the past.

Formula One have just announced that they’re ditching the h0t ch!x in an effort to get with the times.

The sport’s organisers, Liberty Media, released a statement saying that having scantily-clad ladies hanging around the grid area before races was “clearly at odds with modern day societal norms”.

The statement issued on Wednesday read:

Formula 1 will end the long-standing practice of using walk-on grid girls, commencing with the start of the 2018 FIA Formula 1 World Championship season. These changes also apply to our other motorsports series that take place during the Grands Prix weekends.

Formula 1 considers the time spent by teams and drivers on the grid before a race as one of celebration, where guests and various performers can add to the glamour and spectacle of the Grand Prix, enabling promoters and partners to showcase their countries and products.

We don’t believe the practice is appropriate or relevant to Formula One and its fans, old and new, across the world.

Would be a good idea to use the money saved from paying the ‘grid girls’ to make a small investment in getting more female drivers into the sport… https://t.co/dS8B2WSrQg

Chief F1 writer, Andrew Benson, shared a similar sentiment, suggesting that despite the backlash that’s sure to transpire, the move is “an appropriate decision for the times, and one that F1 had to make.”

“Society is living through a defining moment in sexual politics. It is the time of #MeToo, and revelations of sexual harassment and worse by powerful men. Some will see this decision as tokenistic and unnecessary. But the likelihood is that the vast majority of those people will be men,” he wrote for the BBC.

The decision comes mere days after the Professional Darts Corporation announced it will no longer use walk-on girls to accompany players on their way to the stage.

While the outfits of grid girls in recent years have been more modest than the rhinestone bikinis of the early 2000s, it doesn’t make the tradition any less degrading.

Having women stand around on hot days, doing little more than smiling and demonstrating superior balance in stilettos, should have been ditched years ago. 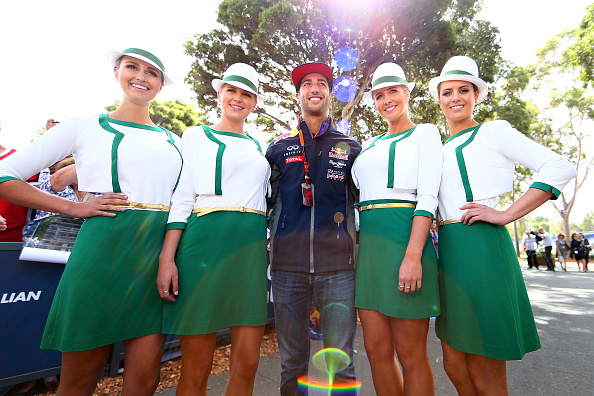 Growing up a girl, when I watched sport on TV (which was admittedly not often, because Go Go Stop was the real MVP) the only females I saw were cheerleaders and podium or grid girls.

Sure, I thought there outfits were hella cute, but they didn’t do much by way of inspiring me to get out there and give sport a go.

While the women who choose to occupy these roles are in no way deserving of criticism, having them standing pretty serves little purpose outside of perpetuating outdated gender stereotypes.

New research from the Commonwealth Bank illustrates this, revealing that two thirds of Australians (68 per cent) say our kids should be getting more exposure to female sporting role models.

In fact, one in two Aussies can’t name a current female athlete and male athletes are still more recognised than their female counterparts (65 per cent males vs. 40 per cent females).

Results also showed that increased TV coverage is key to closing the gender sports gap with the majority of Aussies (70 per cent) saying that if there were more women’s sport on TV, more women would continue or take up competitive sport. These claims are substantiated by record numbers of female participation across all levels of the AFL following the inaugural season of the AFLW.

While young girls can now look up to the likes of Moana Hope absolutely killing it on their screens, more needs to be done to up female representation in sport, and abolishing ‘eye-candy’ roles is a step in the right direction.

Instead, it’s about keeping up with modern society, respecting women for more than their outward appearance, and proving that females can (and should) be involved in motorsports beyond looking gud for blokes.

It’s reassuring that two major, global sporting events have forged forward and abolished the practice, regardless of consequence (because some crusty old timers will no doubt view this move as the apocalyptic rise of ‘PC-culture’).

Here’s hoping Formula One and Professional Darts Corp’s moves will inspire other yuge events like Tour de France to quit employing women as objects to ogle.