It’s been described as “the grossest thing happening on a uni campus right now” and “lecherous”, but the super-controversial ‘Hotties of Melbourne University’ Facebook page is no longer after a petition to have it pulled worked.

More than 23,000 people signed a Change.org petition to have the page – whose members anonymously posts pics of women (there are a few token dudes-shot, but not half as many) along with their name and degree, often rating their appearence – pulled down.

“The continued presence of the page allows rape culture to trickle into the lives of the students of The University of Melbourne,” the petition reads. “It will no longer be tolerated for it condones sexism, predatory behaviour and disrespect. We are not fooled by the hollow gloss of false humour.”

Blandthorn added that it treats “women as property; a commodity to be bought and sold through the promotion of comments such as ‘Sold: I’ll trade you 6 goats and 100 gold pieces’”.

The uni’s Deputy Provost Susan Elliott said it was first made aware of the page about a year ago, but that Facebook stated the material wasn’t offensive enough to be removed.

Except, it totally is:

Laura is bloody chuffed it’s finally been taken down, posting this update to the petition this morning. 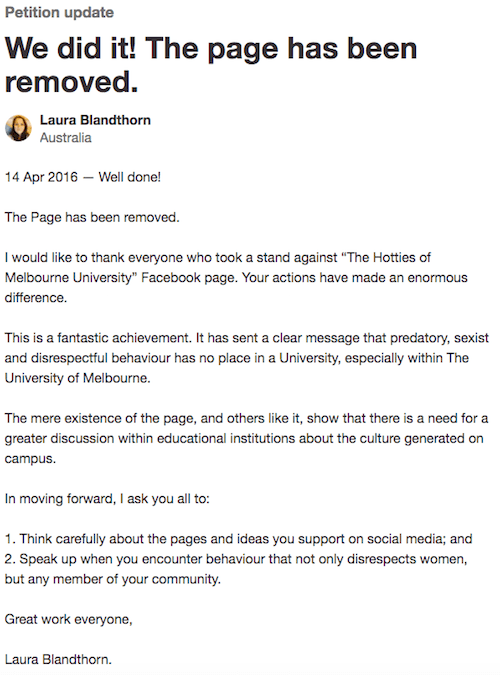 For now, at least, Facebook has responded in the correct way by quashing the page – but it remains to be seen how long it’ll be before one just like it springs back up.

Victoria Police spokesperson Ian Geddes said that anyone who felt victimised by the page can contact them for help / guidance. You can get the switchboard from Monday to Friday, 8am to 5pm, on (03) 9247 6666.