In typical style, the newest work from the spray can of the art world’s most famous unknown  – Banksy – was created under the cover of darkness, and makes a serious political statement.

This time, he (she? Who knows) sprays the use of teargas in the Jungle refugee camp in Calais, France, with an artwork that depicts the famous Les Misérables poster child with tears in her eyes as gas rises beneath her. 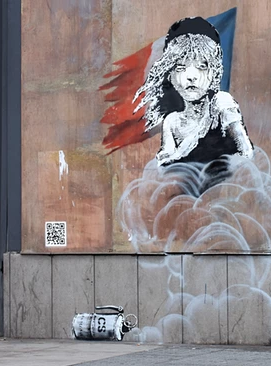 Smidge of background info: French authorities recently announced plans to bulldoze a large part of the camp to prevent asylum seekers from trying to climb into trucks and buses every time a traffic jam occurs on that motorway that’s adjacent to the site, evicting 1,500 refugees (or about 20% of the camp) in the process.

Banksy’s new work went up on the wall of the French embassy in London over the weekend, and is his first interactive piece; there’s a stencilled QR code to the right of the work and, if passersby hold their phone over the code, they’re taken to this video:

The 7-minute clip shows an overnight police raid on the camps back in January, where teargas, rubber bullets and concussion grenades were used by French authorities to clear refugees from the to-be-bulldozed area, which is funny ‘cos just last week they denied teargas was being used to clear the camp.

“It’s not in our interest to use teargas unless it’s absolutely necessary to restore public order, and it is never used in the camp itself,” a police spokesperson told The Guardian.

This piece is the latest in a series of pieces by Banksy criticising Europe’s handling of the refugee crisis; last week, one he did depicting Steve Jobs (the son of Syrian migrants) in the wall of a tunnel inside the camp, was defaced by vandals.

But not before an astute refugee set up a tent next to the work, covered it with a blanket and charged people 5 euros for viewing privileges.