We Need To Talk About What Alex & Richie Talked About

CONTENT WARNING: This article might bring up some dark stuff for you. If you're having a touch time, please call Lifeline on 13 11 14. If you are in immediate danger, call 000.

One of the most hyped moments for this season of Bachelor In Paradise was Richie Strahan and Alex Nation sitting down to discuss the demise of their relationship. Everything from phrases like “dirty laundry” and “grubby details” were thrown around in promos and articles leading up to the episode. But when it finally happened, it wasn’t as salacious and spicy as everyone had hoped. It was downright heartbreaking.

Their conversation was absolutely revealing and look, if we’re honest, it was totally tea. It just wasn’t the fun tea we all were expecting. I don’t think that’s on the way Ten decided to promote it – I think we just expect these shows to only hype zesty content, not the serious stuff. It was a real curve ball from the Bachelor franchise.

While they didn’t outrightly say the word – which means we can’t either, by the way, we can only speculate – these statements from the pair of them seem to say everything but.

“I feel like people would have a very big opinion of a woman, being left alone, to do something that involved both of us.” – Alex

“I was left alone, to go through something massive that no woman should go through.” – Alex

“Alex you’re a mother. I know that, clearly. I spoke to you at length about that because you’ve gone down that pathway. You know what is involved with that. We spoke at length about it and I supported you and your decisions.” – Richie 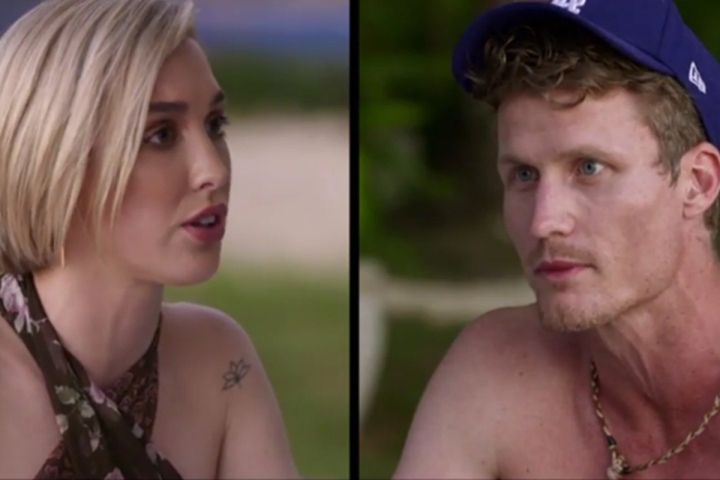 The intense conversation has stirred up a lot of debate around several topics.

Were Alex and Richie Forced Into This Convo?

Obviously, much of the debate around their conversation is about whether producers forced them into it. Were they told as a couple to discuss the ins and outs of their break-up? According to Osher Gunsberg, host of Bachelor In Paradise, they weren’t.

Both Richie & Alex were comfortable with it.
And don't forget as part of our Duty of Care, they both have access to Mental Health professionals before, during & after production. #BachelorInParadiseAU https://t.co/3BA1oYnGA6

Alex Nation and Richie Strahan themselves haven’t commented since the convo aired, so we don’t know what their take is on the circumstances. But it would be quite an ethical quandary if Network Ten coerced the pair into revealing private information about their relationship that they weren’t prepared to reveal themselves, and surely they wouldn’t take the risk of Alex/Richie blasting them publicly?

They clearly shocked Richie with the appearance of Alex, but Alex was the one to approach Richie to take him away for a chat, and she specifically says “shall we talk about what happened?” and he agrees to. It’s not like Ten put Richie in a room and then put Alex in there, then left them there until they talked about it, you know?

In saying that, I’m aware producers can coerce. We’ve all seen Unreal. We know what the behind-the-scenes can be like. If Alex or Richie came out and said “I felt pressured into that conversation and I was uncomfortable with what I revealed because of it”, it wouldn’t surprise me. But so far, they haven’t said anything of the sort.

If They Weren’t, Was It OK To Have Such A Revealing Convo On Reality TV?

Another debate doing the rounds is whether Richie and Alex should have had this conversation privately and not in front of 4 million cameras and the entire nation. The ex-couple hadn’t spoken for over a year according to Alex. It definitely seemed like a weird decision to have The Talk while cameras were rolling.

The thing is, ultimately it’s their choice as people to reveal whatever they want. If Alex is OK to reveal her experiences, who are we to criticise that? I personally would shy away from having such a heartbreaking and raw conversation with my ex in front of cameras, but I’m not Alex or Richie. So to me this debate is redundant – they can do what they want. I found it weird, but it’s not up to me to judge their decision.

But in terms of the decision to run the convo – running the discussion uncut and unedited was a really positive decision to me. These shows are all about the editing, and I love them for it. But it was a good thing to show an ex-couple having a very heated and complex conversation in what I felt was quite a respectful and controlled manner, to me. Sure, I’d have liked Richie to answer Alex’s questions a bit more. But overall I think they both handled it well and considering we’re constantly seeing couples screaming at each other and slinging insults around on reality shows, maybe having a couple approach a hard conversation with self-control and respect was a really good move from Bachelor.

Did Omitting The Word Just Perpetuate The Stigma?

Whether it was Alex’s decision to skirt around saying what we all assume she was saying, or whether that was a network decision is one thing. She’s obviously entitled to reveal as much or as little about what went down as she likes, although I’d argue that she wanted people to come to the conclusion that we did, because she really said everything but The Word. Like if she didn’t want people knowing the specifics I would assume she wouldn’t have made it so explicit.

But the bigger question here is whether not using the word perpetuates the stigma around the issue at hand. I hate that I can’t even outright say it right now – given we’re striving for female empowerment and the normalising of female experiences, was shying away from saying the actual word just perpetuating the hush-hush attitude that can be so damaging to women going through what Alex (likely) went through?

I’m torn here because I am very much sitting on the side of the fence that says it’s HER decision to say whatever she wants to say. But then I also think if you’re going to say everything but, why not just SAY it? If she wasn’t comfortable with people knowing what specifically happened, surely she would have just said “you know what I’m talking about” and left it there.

It’s pretty damn cool that in 2019 we are seeing prime-time television shows running conversations like this. In many ways I feel like arguing over whether omitting the word itself added stigma is irrelevant – the fact Alex and Richie even revealed what they did about their break up was groundbreaking for prime-time reality TV.

It absolutely was for the Bachelor Australia franchise, which generally has shied away from serious topics in favour of the fun, frothy stuff. Again – I love the fun, frothy stuff. But I also think normalising issues that have long been kept hush-hush is incredibly important and something we need in this country, so I’m really into the fact that they ran the segment and I think it’s commendable that Alex in particular had the courage to discuss it (as long as she felt she wasn’t pressured into it, of course).

I guess overall it’s a complicated thing, discussing that conversation. So many elements come into play – how much of the decision was Richie and Alex’s is a big one. At the end of the day it really comes down to this. What did they as people want to reveal? Because it’s not their responsibility to reveal anything they aren’t comfortable with revealing for the sake of progression or for ratings. So I hope they came out of watching that episode and felt good about it all.

READ MORE
If Your Dating "Thing" Is Making You Feel Shit, It Probably Is Shit