ACCC Says Apple Lied To Us About Its New iPad

So you’ve just bought the New iPad (congratulations), black (of course), 32GB (just enough) with Wifi + 4G capabilities so you can stream the heavy stuff at home (data-heavy we mean, but, you know, heavy-heavy too) then scamper outside for some lighter reading/browsing on a mobile data network that is purportedly faster than the one currently updating the weather cycle on your iPhone. But wait, they’re exactly the fucking same? You mad? You’re not the only one.

Australia’s consumer watchdog has taken Apple to Federal Court today over claims it lied about the 4G capabilities of its new iPad tablet device. In a statement released yesterday, the Australian Competition and Consumer Commission said that Apple willfully mislead consumers about the mobile data networks available to its Australian customers, noting that promotion of the New iPad WiFi + 4G is “misleading because it represents to Australian consumers that the product ‘iPad with WiFi + 4G’ can, with a SIM card, connect to a 4G mobile data network in Australia, when this is not the case.”

Technically speaking, the third gen tablet device is capable of accessing 4G networks, just none that are supported on Australian mobile data networks, and hence, none that are available at your local Sunday morning brunch spot.

“Consumers who have purchased or are considering purchasing an ‘ iPad with WiFi + 4G’ should ensure that they have a proper understanding of the mobile data networks which this iPad can directly access by a SIM card,” the commission said.

It’s worth noting that at least some iPad WiFi + 4G tablets sold in Australia come with a sticker that says the device will only operate at up to 3G speeds in Australia. 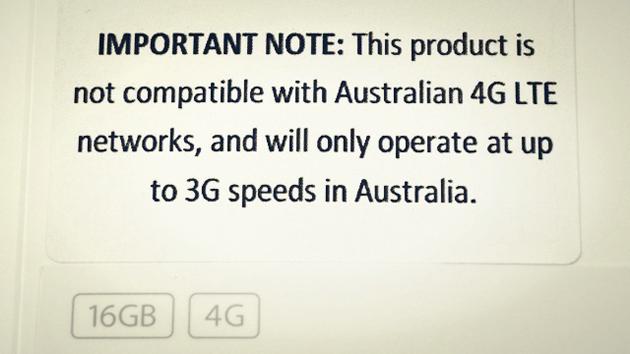