It has to be said that Melbourne, in spite of all that it has to offer, is undoubtedly the arsehole of Australia when it comes to beaches.

While, Sydney, Perth, and about 95% of Queensland‘s coast have an abundance of breathtaking and iconic landmarks, poor ol’ Melbs gets close to nowt. Its seas are more like bays, really – bays where you wade into ankle-high water with a paddle pop in your hand, rather than dive headfirst for a refreshing plunge.

Nevertheless, the southern beaches – esp. St Kilda – are still super popular, and people flock to them in the hope of having the blissy hot afternoon sun-deprived Melburnians so desperately crave.

Unfortunately, it looks like Victorians won’t be able to enjoy that anytime soon. The local Environment Protection Authority (EPA) have issued a warning that the majority of Melbourne’s most popular beaches most likely contain gastroenteritis bacteria.

THIS IS WHY WE CAN’T HAVE NICE THINGS.

Apparently, the recent onslaughts of torrential rain (that literally turned most of Melbs into a deleted scene from ‘The Day After Tomorrow‘) brought some pleasant faecal contaminants into the beaches through the stormwater drains.

The EPA have run the tests, and deemed 21 of Melbourne’s 36 beaches to have unsuitable conditions, uploading this helpful lil’ map if you want your 2017 to begin without a side of gastro. 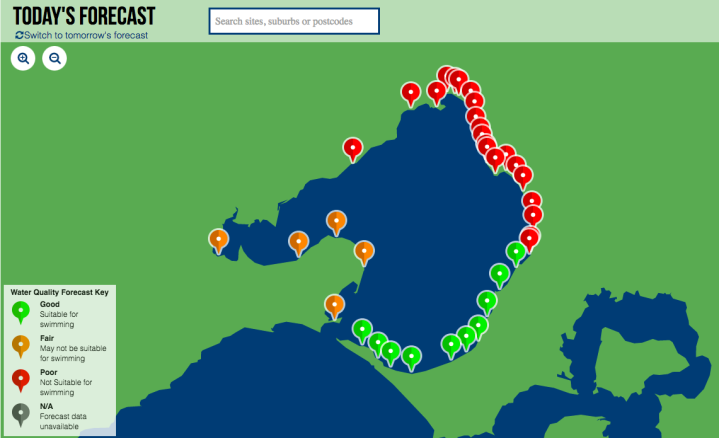 Those red blips apply to pretty much all beaches that are near the city centre, including St Kilda, South Melbourne and Brighton.

The website also advises against ‘swimming near stormwater or river outlets after 24-48 after heavy rain’, so, considering the unpredictability of Melbourne weather, we will probably never bathe in natural waters again.

Time to bring out those inflatable pools, folks.

Find out where you can and can’t swim (if you *don’t* want to be exploding from both ends) here.