They say “hell hath no fury like a woman scorned“, and Beyoncé merrily smashing cars with a baseball bat in the diss album of the century definitely played up to that.

But perhaps the saying should be amended to “hell hath no fury like a BeyHive whose queen has been scorned“, because ever since Bey alluded to Jay Z cheating on her with someone called ‘Becky with the good hair‘, they have been ripping suspects to fucking shreds.

Their main victim here is fashion designer Rachel Roy, who is the key suspect in the current Bey / Jay Z infidelity rumours.

She either taunted the BeyHive OR got spectacularly unlucky, because she posted a photo to Instagram with the caption,”Good hair don’t care, but we will take good lighting, for selfies, or self truths, always” – after Bey’s visual album ‘Lemonade‘ dropped.

(Her Insta was flooded with bee emojis, lemon emojis, and literally thousands of pretty shitty comments, and is now protected.) 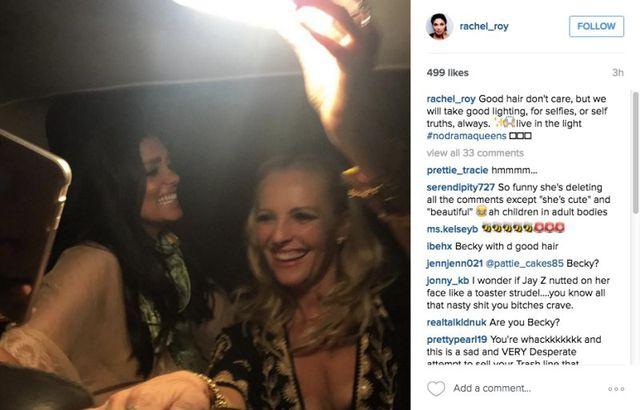 But in a once-in-a-lifetime terrible coincidence, thousands upon thousands of people have mixed up Rachel Roy with celebrity chef and syndicated talk show host Rachael Ray, and – mistakenly believing her to be ‘Becky with the good hair’ – also started also flooding her Instagram with thousands of shitty comments.

We may be taking our lives into our own hands here, but the BeyHive needs to fkn chill. Things may or may not have happened, Beyoncé may or may not be getting her revenge, but cyber bullying the shit out of women (yeah, that’s plural) is not cool. Did we learn nothing from Monica Lewinsky?

hey, will someone let me know if it’s safe for me to listen to #LEMONADE? ?? #sarcasmfilter

There is clearly only one solution to this problem: