When last we touched base with melancholic Canadians, Arcade Fire, they were slavishly devoted to the act of growing out their beards to optimum flocculence while also dining well and making music with which they hoped to slowly compose their long awaited fourth album, due in late 2013. A small taste of the goods to come were offered up earlier this year when the band performed some decidedly Delta-proof (that is, slow-tempo and sequin repellent) new material that hinted at even moodier territory for the band.

That moodiness, it would seem, is here to stay before taking a turn for the ebullient with confirmation of a long-standing rumour that James Murphy of LCD Soundsystem, DFA, etc, is in the studio also growing his beard and lending his musical talents to the band’s forthcoming album.

Apparently Arcade Fire are, according to their manager Scott Rodger, “in with James Murphy on three or so songs, plus Markus Dravs [who produced the last two albums] is a long-time collaborator. They write too many songs – that’s a good problem to have. There’s around 35 songs with Arcade Fire, two albums-worth for sure.” 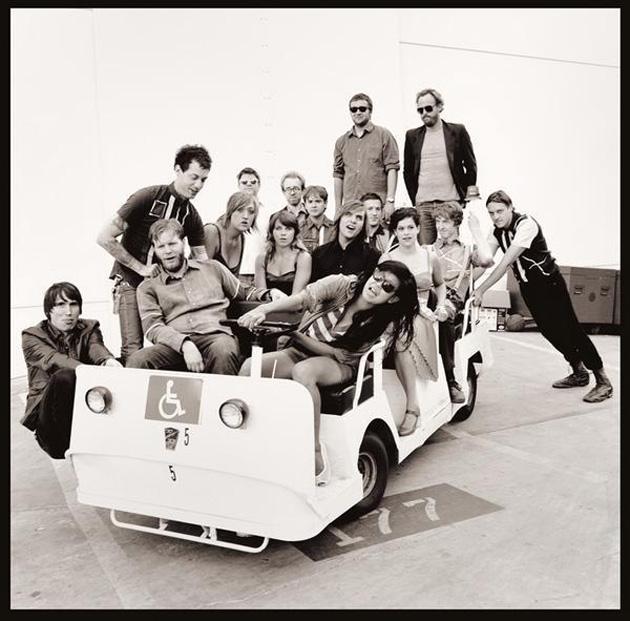 According to The ‘Tube, the bands started hanging out together during the sophomoric Neon Bible tour, where this BI (Before Instagram) Instagram was taken by Brantley Gutierrez. Murphy is pictured above that with fellow Arcade Fire collaborator Spike Jonze, whose video for The Suburbs you can watch below.

Photo by Kevin Winter via Getty