PEDESTRIAN.TV have partnered with Griffith University to help you carve your own path, whatever it might look like.

According to the Hearing Care Industry Association, around 15.3% of the Australian population are currently living with some form of hearing loss. More specifically, that’s an estimated 3.95 million people who deal with the challenges that come with a hearing condition daily.

Unfortunately, these stats are trending upwards, and the number of Aussies with hearing loss has increased by 9.7% increase since 2017. Luckily, there is a multitude of incredible innovators making huge developments within the health sector that are aimed at enriching the lives of those who are living with a hearing condition.

One of the leaders in this space is Elliot Miller — a Games Design grad from Griffith University who transformed his life-long interest in gaming to develop an app that’s proven to be a huge game-changer for the hearing impaired.

His app ‘Hearoes‘ is the first of its kind – it’s a user-centric auditory training app that contains over 60 ‘gamified’ activities that focus on key areas of auditory training. Some of the key areas they focus on include helping individuals identify different environmental sounds, vowels, consonants, sentences and even different accents. It’s proven to be a huge success too, with the app receiving 80,000 plays in the last 12 months alone.

Having experienced deafness his whole life, Elliot describes himself as a “visual person”, which fuelled his fascination with game design and software – it was the catalyst that sparked the development of Hearoes.

“Being deaf all my life, I became a very visual person who was always fascinated with user experience and interactive design in software. I think games are a perfect example of this, in the way everyone can have a different dynamic experience which can then become a personal one,” he said when explaining how Hearoes came to be.

“While doing a Bachelor of Games Design at Griffith Film School, it helped me realise that it is possible to create an environment for others to play and create their own interactive experience with, whether through storytelling, learning aspects or some of the other many elements which games can introduce.” 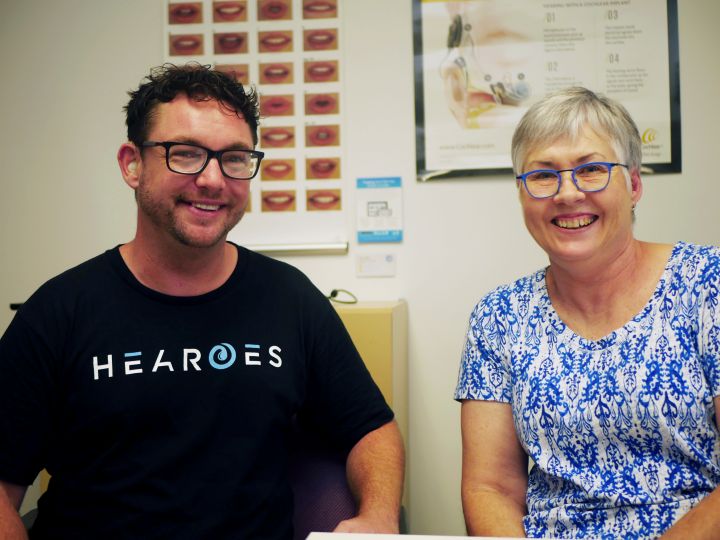 Fusing a deep, personal experience with a passion like gaming and using it to better the lives of others is simply inspirational – it’s a path that comes with persistence and innovative thinking, which basically sums up Elliot’s journey with ‘Hearoes’. It may sound unconventional, but his was path was forged out of self-motivation, hard work and the need to see his vision come to life – an inspirational trait we could all learn from.

To get a better understanding of the process behind its development, we had a chat with Elliot and delved into it all.

PEDESTRIAN.TV: Can you tell us about the development of Hearoes and how the app came to be?

Elliot Miller: I’ve grown up deaf in both ears all my life with hearing aids, before receiving a cochlear implant (also known as a bionic ear) at the age of 25. I’ll always remember the time shortly after my implant, where I was jogging down the street and noticed what I thought was a sound that I couldn’t identify, however, when I stopped, the sound stopped as well. I didn’t think much of it until I got home later that day and realised it was the coins in my pocket.

This became a big realisation because although I could hear what I thought were sounds, it was very challenging and became a big learning curve to be able to identify what they were, especially, if there wasn’t any other feedback such as visual or tactile to help reinforce the auditory feedback. I tried a lot of different auditory training materials and content after my operation. I couldn’t find anything I found particularly engaging, which I think is an important element when doing training, especially something which covered Australian sounds throughout the whole pathway from environmental sounds and phonetics and sentences.

This resulted in me creating a couple of fundamental gamified activities focused specifically on auditory training for my own benefits to learn, in which I ended up talking about with my clinician who started recommending it to others, and Hearoes was built up from there.

We’ve had some amazing feedback and stories, not only from the recipients but also others involved in the training process, including clinicians, teachers and even parents as well as collaborating with some great organisations such as Deaf Services, eHealth Queensland and Royal Brisbane and Women’s Hospital.

It’s very motivating being able to help others who are experiencing similar challenges, especially as I’ve faced similar daily challenges myself.

PTV: What sort of skills did you develop during your time at uni that aided the development of Hearoes?

EM: Games Design at Griffith has helped with learning the process of developing games and working together as a team in learning and combining factors that could make a game such as interactive design, sound design, animation and narratives.

When everyone’s expertise comes together, it’s fascinating as it creates a whole new, exciting and dynamic environment, whether it’s focused around entertainment, storytelling, learning or a combination of different experiences which can be quite different to other mediums. Having this realisation and understanding knowledge on the fundamentals of games from development to the theory in games has really helped Hearoes to be where it is today.

One of the many incred games available on Hearoes.

PTV: Did you have any hands-on experience in particular that helped inspire the development of the app?

EM: At the same time as receiving the implant, I was undertaking a Bachelor of Games Design and was researching ‘Serious Games’, which studies how one can learn through play and interactivity.

In Serious Games, we can see parallels that games as a dynamic platform have the ability to consistently tap into how we essentially learn through play, and can potentially create experiences which aren’t seen in other mediums, such as engaging repetition in a safe and goal-oriented environment, which encourages sub-conscious learning.

PTV: What key developments are being made within the gaming and tech space in Australia (or worldwide) to aid people with disabilities?

EM: One of the interesting things about games, is how everyone can play games for different reasons, whether for it’s the adventure, relaxation, puzzle-solving and learning aspects or even to have a shared experience with others. Sometimes some people who have disabilities can find games as a medium to connect with others in a way that they don’t feel they’re being defined in ways they might perhaps feel they otherwise do.

One of the key developments being made in the gaming space for those with disabilities is probably around accessibility, especially as developers are becoming more aware, and assistive technology is becoming more available. Some of these solutions might be around hardware such as Microsoft’s Adaptive Gamer Kit released last year, which is a controller with accessibility in mind and allows the player to customise buttons and switch inputs to address challenges people may have when interacting with games.

But accessibility isn’t just around hardware, but also from the developer as they become more aware of how they can add an inclusive experience whether it’s an option of having tactile or visual feedback as well rather than just auditory feedback (such as subtitles or different feedback effects if an alarm is going off) through to be able to customise controls to suit every kind of gamer.

PTV: Was the vision you had before starting your degree similar to what you ended up achieving after graduation?

EM: With the possibilities that games can create being endless, especially growing up influenced by indie or some of the smaller studio games and their creativity, I always felt I wanted to do something unique in the space to start with, whether it was storytelling, or unique mechanics, experience in general.

However, it wasn’t until I learnt more about the different unique experiences’ games could create, in particular, serious games with the dynamic learning aspect that I feel everything came together. Nowadays, not only is there more awareness around serious games, but also mechanics and many game elements are now being carried over to other areas in everyday life often in the form of gamification, such as when the user collects points or rewards when they shop or to motivate them into completing certain tasks or navigating them to complete certain goals.

If you’re interested in checking out Hearoes, it’s available for iOS and Android, and can be found here.

If Elliot’s story has inspired you to follow your passions and help others, suss out Griffith Uni and find out how they can assist you on your path.