Ever tried reading the nutrition label on the back of a healthy snack and thought, whatever, I’m getting cheese fries?

You and me both.

Unless you have a degree in dietetics, they can be near impossible to decipher. It’s ironic really, given the whole point of a nutrition label is to help us make informed decisions about what to eat. 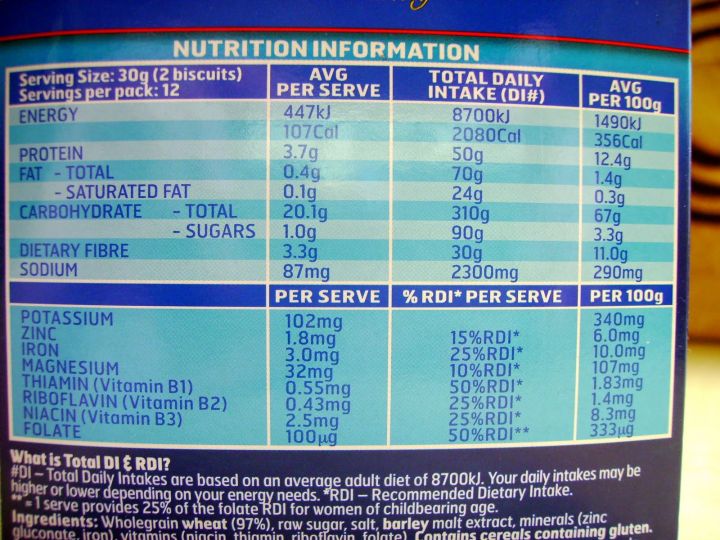 u wot, courtesy of weetbix

What’s the difference between saturated fat and total fat? A kilojoule and a calorie? How many grams of salt per 100g is too much salt per 100g? What is the meaning of life?

Thankfully, there are a few key things you can learn that’ll make reading those dastardly tables a walk in the park. So without further ado, PEDESTRIAN.TV proudly presents How To Read A Nutrition Table For Dummies, By A Dummy.

For the past forty years, Australia has been measuring the energy in food according to kilojoules (kJ). Kilojoules, not unlike kilometres, are just a unit of measurement. Calories? They’re the American measurement.

As the QLD Govt explains:

The difference between calories and kilojoules is terminology – they’re two different ways of measuring the energy contained in food and the energy we expend. You can convert calories to kilojoules by multiplying the calories by 4.2.

So why is it that when people talk about diets and nutrition, they usually refer to ‘counting calories’ or ‘calorie deficit’?

It probably comes down to the US’ influence on ‘Straya. From films like Mean Girls to American products that have flooded the Australian market (Oreos, Krispy Kreme, Maccas), food’s usually referred to in terms of calories.

Also, most calorie counting software operates in terms of calories, meaning a lot of us still end up needing to convert the kJ to a calorie. It’s also easier to add up smaller numbers.

A good rule of thumb if you’re terrible at maths? Just divide the kJ number by four and you’ll have a rough idea of how many calories you’re about to consume.

BUT ON THAT: KILOJOULES AREN’T THE BE ALL AND END ALL

It’s pretty easy to get consumed by counting kilojoules, but it’s no good.

They should really only be used as a guide in conjunction with a healthy balanced diet.

If you were to eat only according to how many kilojoules are in foodstuffs, you’d probably avoid highly nutritious stuff like nuts, fatty fish, olive oil and avocado. They’re high in kilojoules but the good kind; the kind that satiate you, filling you up for longer and meaning you don’t need to eat as much.

Plus, they’ve got a raft of other health benefits that you wouldn’t get from the same amount of kilojoulage of, say, a packet of chips.

FORGET THE FRONT & HEAD TO THE BACK OF THE PACK

They can churn out the fattiest, least nutritionally-valuable doughnut in the universe and whack a ‘great source of fibre!’ sticker on the front, leading the less health-woke among us to believe pink-frosted baked goods are a good daily brekky option.

If you look at it cynically, it makes sense that food manufacturers want to trick us into eating their food, no matter how crap it is for our insides.

This is the number one reason why it’s so important to ignore the clever marketing spin on the front of the box and instead head directly for the nutrition labels. Brands can’t hide behind clever wording in the nutritional panel; here you’ll see that those pink doughnuts have an exorbitant amount of sugar and fat that far outweighs that supposedly high fibre content.

WATCH IT WITH THE SERVING SIZE

Let’s be real: sticking to a single serving of your favourite delicious treat takes serious willpower. Strength of character, even.

If you have no trouble polishing off a 165g ‘share pack’ of Honey Soy Chicken chips in one sitting, you’re not alone.

You may have appeased your guilt by having a geez at the nutrition table and seeing that a single serving is just 576kJ. But… a 165g packet contains 5.9 servings, and a single serving size is roughly 18 chips.

If you’re serious about sticking to serving sizes (and don’t hate us for suggesting this), you can divvy up the packet in individual snap lock bags before chowing down to keep yourself honest.

IS IT WORTH GOING BY THE ‘HEALTH STAR RATING’?

This came off the back of a big report by Four Corners that shed light on some “big flaws” in Australia’s federal health programs. In short, companies like Coca-Cola, Pepsico, Unilever, Nestle and Kelloggs have a seat at the table setting the policies that shape consumption of their own sugar-laced products.

In short though, public health researchers have put the algorithm underlying the scheme to the test on almost 50,000 products and have found it actually does give an accurate indication of what’s healthy and what’s not in almost all cases.

DON’T BE TOO SALTY

If ingredients were farts, salt would be the silent but deadly.

It’s in most prepackaged foods, and while it’s an important mineral, many of us are eating way too much of it.

Recent studies have shown Australian blokes, on average, eat twice as much salt as recommended by the World Health Organisation.

But it’s not entirely their fault. The salt content is many of our staple foods (like bread, cottage cheese and cereals) can be astronomically high.

A typical snag in bread with sauce holds half your recommended daily salt intake. When you consider the fact that the average Aussie eats 44 sausages a year (totalling 16 teaspoons of salt), that’s a worry.

To reduce blood pressure and lower the risk of heart disease, the Heart Foundation recommends adults eat less than 5g of salt (2000 mg of sodium) a day. That’s less than a teaspoon. It’s not impossible to get below that limit. Clever changes, like subbing in fresh herbs as garnishes and opting for sodium-reduced sauces and educating yourself on salt content in your fave foods, all add up.

AAMI Health Insurance is issued by nib health funds limited ABN 83 000 124 381 (nib) a registered private health insurer and is arranged by Suncorp Insurance Ventures as an authorised agent of nib for which it receives commission.