The Academy Pledges To Increase Voter Diversity After #OscarsSoWhite

As the list of prominent no-shows at this year’s Academy Awards continues to grow, the group’s president Cheryl Boone Isaacs has released a statement detailing how they’ll address their lack of internal diversity.

The proposal aims to double the number of female and minority members on the Academy’s 51-strong board by 2020, in response to intense public scrutiny over this year’s nominees. For the second year in a row, not a single person of colour was nominated in any of the acting categories.

In the statement, Boone Isaacs says “the Academy is going to lead and not wait for the industry to catch up,”  which is a little odd, considering the Academy more-or-less represents the industry as a whole anyway. To implement the increased board diversity, they’re scouting for industry talent outside of the norm:

“The Academy will supplement the traditional process in which current members sponsor new members by launching an ambitious, global campaign to identify and recruit qualified new members who represent greater diversity.”

In addition, ongoing membership criteria has changed, as new members will be granted 10 years of voting status before they’re up for review. The intention, of course, is to keep the voting body in-tune with the cultural climate while still celebrating high-quality cinema.

That change has been applied to all current members, too. If they don’t meet the criteria after the decade-long term now set by the Academy, they’ll be given honorary status, minus voting rights. Short-term positions on the Board of Governors have also been announced to “immediately increase diversity.”

Worth noting: these changes do zip to address this year’s nominations.

The move comes less than a week after Boone Isaacs – herself a black movie industry professional – personally released a statement claiming she was “frustrated” and “heartbroken” over the Academy’s nominations in 2016. These new changes may be too little, too late for the 2016 Award Ceremony though, as #OscarsSoWhite continues to gain traction among the broader public, who are becoming aware of the Academy’s endemically white nominations.

Read the full statement below: 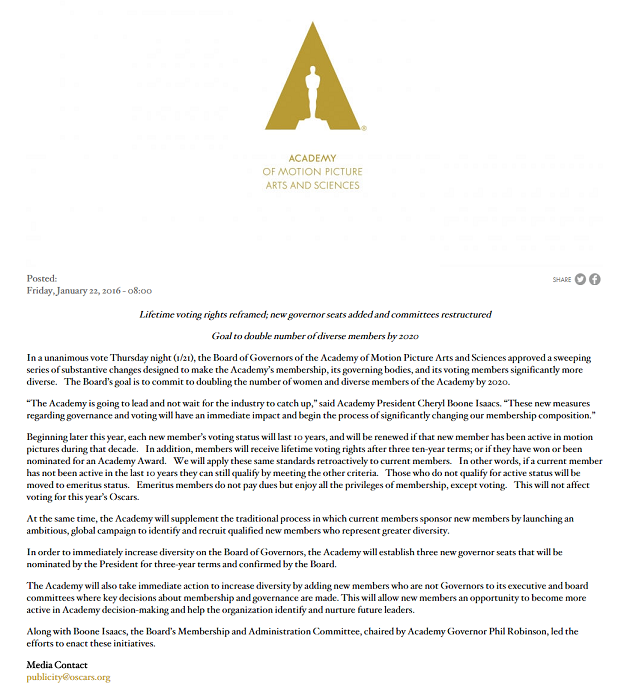