Hey – y’all heard of this guy? 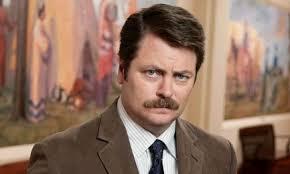 Nick Offerman. Little-known actor. Has a dope moustache. Did a few things on a show called Parks and Something. Ring any bells?

Okay that’s as far as we can go down that road, because the truth is we damn near lost our shit when NICK FKN OFFERMAN announced he was doing a few stand-up gigs down our way, and then again when we got to interview the man himself. It is, to put it lightly, the pop-culture journo’s / average human’s life and career goals all rolled into one.

Now, before we get any further into our interview, we feel it is vitally important to tell you that Offerman laughs in exactly the same way as his character Ron Swanson, kind of a “heuH! heuH! hEUH!” noise that is the product of pure joy. A sweeter sound we do not know. It also conveniently reinforces our belief that the Venn diagram of Nick Offerman and Ron Swanson is basically a circle.

If you’ve ever caught one of Offerman’s AMAs (which he tells us he’s very fond of, btw), you’d know that he and his wife Megan Mullally (who plays Tammy 2 on Parks and Rec) are the TRUE, actual, relationship goals, if you’re still using that term. When we asked Nick what he was most looking forward to in 2016, he said that he hoped most of his projects fell through so he “could sit on the couch with his wife and do some kissing.”

Originally Mullally and Offerman were scheduled to tour together, but unfortunately for us all, Mullally had to pull out due to a scheduling conflict. Instead of the pair performing their Summer of 69: No Apostrophe tour together, Offerman is instead putting on his solo show Full Bush which kicks offs in Sydney tonight and continues its way ’round Australia and on to New Zealand.

“The show has obviously gotten much less good-looking,” says Nick, but “the meal will have more meat entrees and less cupcakes.”

Rather than you’re usual q&a sesh, we asked the great Nick Offerman if he’d like to play a game of ‘Would Your Rather’, unfortunately minus anything in the way of alcohol for reasons like “it’s 10am” and “do you wanna keep your job?”. Boo-urns.

The POINT is, Nick obliged. See his answers below:

PEDESTRIAN.TV: Given the name of your show (‘Full Bush’), we gotta ask: Brazilian or bush?


Oh boy. My heart says Scotch, but my head says wood. if i work with the balsa wood effectively enough, i can sell my work for perhaps a better quality of Scotch.

Would you rather sit next to someone on a plane who wouldn’t stop talking to you, or who couldn’t stop farting?

Farting [he says in a tone that implies this should be obvious]. I would never notice them, I would overpower them with my own magnificent rolling cloud.

Would you rather have the documentary of your life narrated by Morgan Freeman, or David Attenborough?

I’m afraid I’m not familiar with David Attenborough. Is he an actor? You’ll find the longer you talk to me the more you’ll learn that I’m incredibly ignorant.

[At this point we find ourselves in the uniquely blessed position to explain to nature-lover Offerman who, exactly, David Attenborough is. It was a beautiful moment.]

Well, just based on that brief description, I’ll definitely prefer him [Attenborough] to Morgan Freeman.

Would you rather have to shave your face every day forever, or wax your butt once a week?

Oh boy. I don’t think my derrière undergrowth is that rampant. And I despise shaving my face, so I think I’ll go with the waxed fanny, please.

Would you rather have a starring role in the next Star Wars movie, or Jurassic World movie?

Oh gosh. Geez… I guess the Jurassic World franchise, because that would reunite me with my beloved Chris Pratt.

Would you rather fight a six-foot crocodile, or 100 aggressive koalas?

[Nick bursts into his Ron Swanson laugh. They are one and the same.]

I have not met a koala.

Have you met a crocodile?

I’ve not met a crocodile, but I have a more full working knowledge of the pro’s and con’s.

Well, let us fill you in. Koalas are soft, small, and sleep for 90% of the day, but have sharp claws for climbing trees, and most of them have chlamydia.

So I could arguably seduce them into being nice with me, but I’d probably come out the other end with the clap. It is treatable, so I’m going to go koala hate sex.

I’ll bring a stash of eucalyptus leaves, which I believe is their catnip.

As Ron Swanson, would you rather be locked in a basement for a week with Tammy 1, or Tammy 2?

If Ron Swanson were asked that question, he would just get up and leave. But if somehow forced into giving an answer, I think Tammy 2 would definitely be the go-to choice. I’d come out the other end completely drained in every way.

Would you rather your future children spend a year becoming internet famous with daily selfies, or vegan?

It’s two despicable evils [he says in a tone of disgust] but I’ll go with the internet selfies, because at least then they can be enjoying red meat with their dad.

Would you rather a reality show about your life for one year, or to make a guest appearance on *every* Kardashian reality show once a week till end-of-series?

Oh, brother. Again, these are despicable ideas. I’m going to go with the Kardashian thing, because at least then it’s not getting into my own business. I can just pop in, make an appearance. Frankly, they would probably find me so distasteful and would fire me, rather quickly.

Would you rather eat koala meat, or kangaroo meat?

Oh gosh. That’s a great question. I’ve been joking that I can’t wait to taste my first koala, but that’s because I presumed they are not eaten. [We confirm that no, they’re not usually found on the dinner table.] In that case definitely koala.

They’ve gotta be just delicious. Anything that cute can’t be anything but succulent.

Would you rather give up meat or alcohol for one whole year?

Oh god, this is torturous. I’m going to need a drink just to think about it. One is the stuff of life, and one is the … y’know, I’ll give up the alcohol, because I could just eat a steak and then smoke some weed to escape from the pain of not having alcohol.

HELLO, this is P.TV talking again: Now, this last answer from Ron Nick isn’t a ‘Would You Rather’, but we had a precious 20 minutes with the man and we were damn well going to use it. We asked the man, the myth, the absolute bloody legend what his advice to his 20-year-old self would be. Here’s what he said:

“Every person on the planet has to wipe their ass in the morning just like you. Whatever your origins, you have just as much right to thrill the world as the next dipshit.”

That’s bloody inspirational, that is. Worthy of a sunset overlay if we’ve ever seen one. 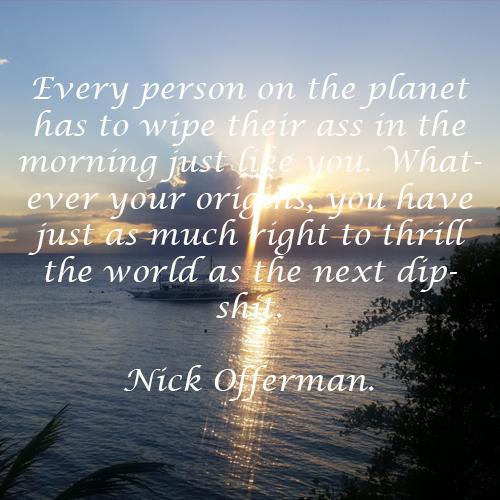 Nick Offerman is touring Australia from Jan 29 – Feb 9, and then onto New Zealand for Feb 11 & 12. Treat yo’self to a ticket HERE.