I tried to resist getting swept up in the Oprah frenzy but then I was washed over by this overwhelming sense of calm and a inaudible whisper that told me: just go with it Suz.

And why not? She may spruik The Secret, arduous positivity, and be way too shouty but by god can that woman give! And what, pray tell, is wrong with self-help books and vocal life affirmations? There ain’t nothin! So don’t hate – appreciate. The following is a giant Oprah-post so consider yourself warned.

Today Oprah filmed her show with her traveling entourage and locals fortunate to nab a ticket – the Opera House’s hottest selling event since the ARIAs. (That’s a joke. The ARIAs were free. Thank god.) Naturally all in attendance were given a gift – a pearl necklace featuring an “O” pendant and a large South Sea pearl from north-western Australia in its centre as shown in the photo below. I snickered at ‘pearl necklace’. Sorry. 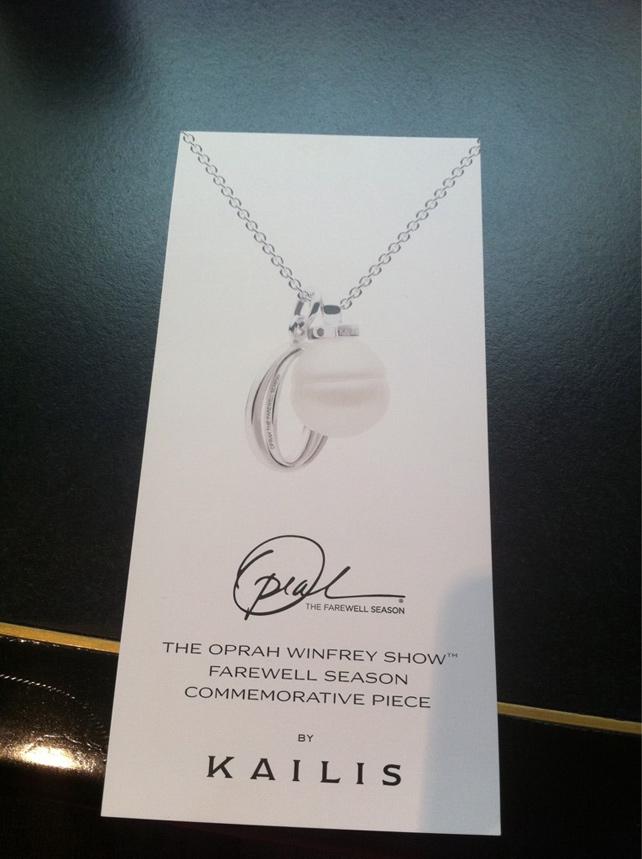 For a reason for which I’m unsure and, truthfully, can’t be bothered to investigate Oprah gave over $1 million worth of computer equipment to the Canterbury Boys School in Sydney’s south-west including a laptop for every teacher and student. Jay-Z turned up to make it happen. Holla. Oprah also presented a $250,000 check to cancer sufferer Kristian Anderson and his wife after she caught wind of his plight via this Hugh Jackman-endorsed video message. It made me weep – and I scathed all the way through The Notebook without blinking a lid.

Other celebrities she’s been hanging out with during her Australian sojourn include Nicole Kidman, Russell Crowe, Hugh Jackman, Jon Bon Jovi, the Irwin family and dreamy television chef Curtis Stone. He made her this delicious food the lucky bitch.

Oprah’s helicopter ran out of gas at the top of the Sydney Harbour Bridge climb. Ho ho! My helicopter never runs out of gas! That’s one thing I’m always very careful of*.

Oprah chilled down with some local bros while simultaneously giving VB and kaftans the zaniest endorsement of a life time.

Oprah has given more dollars worth of publicity to Australia than a soccer world cup ever could. Federal Tourism Minister Martin Ferguson said the use of taxpayers’ money to help stage the show had already reaped a benefit of $71 million in Australia. She also said this at her show: “I have named myself an unofficial ambassador for Australia and I have the biggest mouth on earth. I know that there’s a lot of talk and concern in this country as to what this will mean for Tourism Australia… Let me just tell you — this is the truth: It is immeasurable what four hours of a love festival about your country, broadcast in 145 countries around the world, can do.”