Sisters Tasia and Gracia Seger have earned themselves a place in the My Kitchen Rules finale this coming Tuesday, after knocking germaphobe Zana Pali and bum fluff soul patch-haver Gianni Romano out of the competition.

It is yet to be determined whether the pair will be cooking off against this year’s designated underdogs Lauren and Carmine Finelli, or mummy issues-haver Jordan Bruno, and the object of said issues, Anna.

Win or lose, though, the bickering twosome already appear to be pretty well set up, announcing plans to bottle some of the sauces that have sent the judges into near-orgasmic raptures throughout this year’s competition.

News Corp report that Tasia and Gracia’s first product will be a satay sauce, and that they are currently working on logos, recipes an online store.

TBH I am not even ashamed to say that I am dead set keen to get my hands on a bottle of the delicious liquid and begin slathering it on stuff. 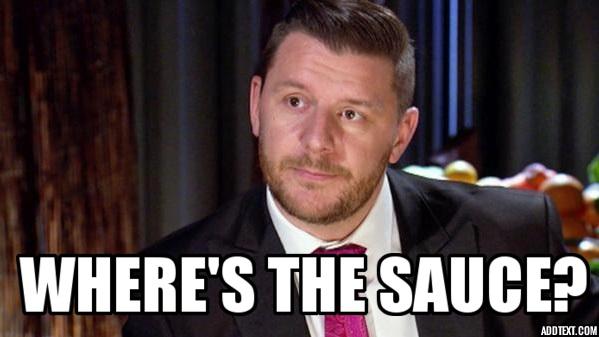 Whatever evil genius was responsible for MKR‘s casting this year has certainly earned their bonus, with the show averting 1.55 million viewers per episode in its current season.

The second round of semi-finals, which sees Lauren and Carmine cooking off against Anna and Jordan, airs on Monday night on Seven (whatever the outcome, the word “amazeballs” will probably come up a lot).