Punters and staff in an American-style restaurant and bar in the UK believe that there’s a bunch of drunk ghosts haunting the joint, trying to nick glasses of wine, and generally scaring children.

According to local reports from the (British) Boston and Langrick regions, the Witham and Blues – which is currently in a building that is over 300 years old – has captured weird mists and floating orbs (totally, definitely ghosts) in a corner of the building, and has previously had instances where a glass of wine had moved on its own, and a “scary lady” was seen near the fire exit in the same area.

Speaking with Lincolnshire Live, general manager of the restaurant and bar, Maddy Taylor, said that her daughter had been spooked by a figure of a woman when the restaurant had closed for the night.

“Luna grabbed my leg, she said there was a scary lady and pointed but there was no-one there. I kept reassuring her but she just kept pointing and saying ‘there’. She was petrified.”

Maddy also recounted a time when a glass of bubbly had slid across a dry table, and friends had jokingly put it down to “drunk ghosts” trying to get into the turps.

CCTV footage from late after the place had closed up for the night shows a weird mist passing across one of the tables, and a bunch of creepy floaty orbs flying around the room. Now it could just be really unfocused dust particles but also it’s definitely ghosts and I won’t hear anything beyond that thank you very much.

Look at that orb just hanging out above the table on the left there! Hang on, this might help. 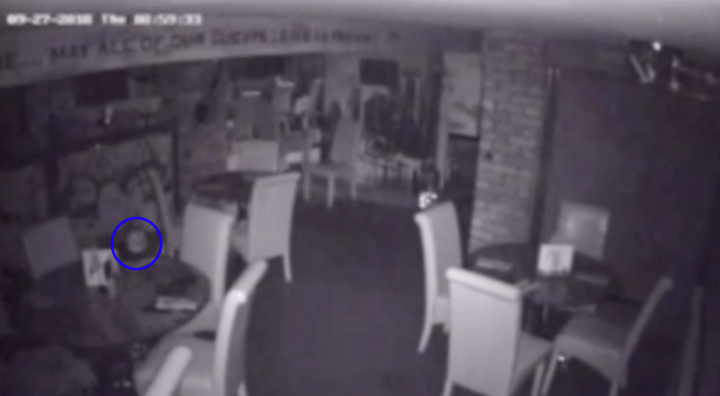 Do not question The Orb, who knows what wrath it may inflict upon us mere mortals.

Ok so we can’t show you the footage cos it’s not on Youtube or Facebook (yet) but head over here and watch the video and tell me that this isn’t a bunch of ghosts swooping in on some free beers after everyone’s left for the night.

Truly, if there were any ghosts that are 100% what I’m going to be if/when I end up in some weird limbo because of ~unfinished business~ on Earth, it’s one of these mischevious boozehounds, just stinging for a spirit.

And if you’re super into mysteries, odd goings-on, and weird AF cases that are littered through Australia‘s own history, then make sure you subscribe to our All Aussie Mystery Hour podcast on iTunes/Spotify, or check it out below.