After the release of ‘Batman V Superman: Dawn of Justice‘, people want Zack Snyder‘s head on a platter.

The feelings that have been felt and the compassionate hugging that has happened worldwide because of this awful superhero extravaganza has really been somethin’ to behold, and the critic reviews caused Ben Affleck to look like this during interviews:

It should be said that the movie has killed it at the box office; it was the second biggest opening worldwide in box office history. But hey – when a car crash happens, people have to see it for themselves, right? The human race loves to watch tragedy unfold in front of them.

And so, petitions are now happening, to keep Zack Snyder away from the Justice League movies:

“Zack Snyder is not the person to bring the Justice League to the big screen. He’s had two chances now to adapt DC characters and has produced middling results.

Even if you loved Man of Steel and BvS. There has to come a time when WB and DC want someone at the helm that can create something that WON’T divide people in such a way.

The building blocks are there for a great different set of superhero movies. Good actors and actresses and even directors. Zack Snyder is just not the guy that should be in charge of the biggest and most important films in the franchise. Especially with his track record now.” 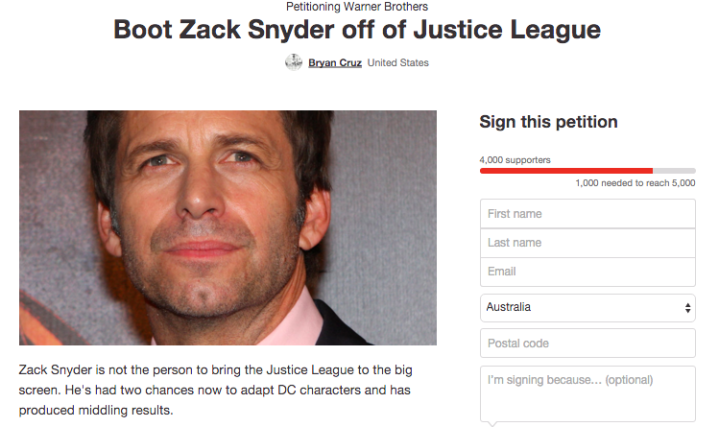 Look, we ain’t here to tell you not to watch the movie, or argue with comic book purists, or fans, or haters, or anyone who is angry and upset.