Channel 10 has been forced to squash rumours that Richie chooses Alex at The Bachelor‘s final rose ceremony but now wishes he chose Nikki instead, after New Idea ran a story saying just that.

The mag claims that Richie regrets not choosing Nikki and now can’t stop thinking about her, confessing to “close friends that he made a huge mistake and now knows she was The One.”

It also claims that Alex, Nikki and Olena are the final three contestants, apparently with the pics of all three flying out of different airports en route to Bali (where the final rose ceremony was filmed) to prove it.

According to a ‘source’, Richie chose Alex because he couldn’t bear to hurt her, and thought Nikki would handle the rejection better. Hmmm. These accusations seem wildly in-character with everything we’ve seen of Alex so far.

Now before you start getting all dismissive of these ‘sources’ and ‘photographic evidence’, remember that it was New Idea who first reported that Megan walked away from the show, which she did, like, 2 episodes later. 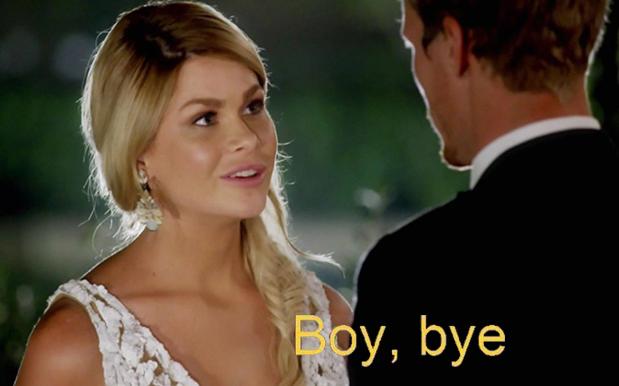 Because of, or perhaps in spite of this, Channel 10 has issued a statement dismissing the story entirely, saying:

“New Idea has consistently produced misleading, unsubstantiated and mischievous articles about The Bachelor Australia this year. This latest ‘report’ is no different.”

Ouch. Is this just Ten sniping at the guys who ruined their finale? Or is it just a bunch of made-up codswallop?

Literally only time will tell, bc everyone/thing else is under heavy non-disclosure agreements and will get lawyerly bitch-slapped.