The most terrifyingly media trained youth I have ever encountered and noted bubbly teen Bindi Irwin (pictured above at her fifteen birthday with a cruel parody of an AN ORCA) has come under scrutiny from People for the Ethical Treatment of Animals (PETA) after announcing her new role as the cherubic face of SeaWorld Parks and Entertainment in a deft ploy intended to administer some much-needed damage control to the festering PR wound inflicted by 2013 documentary, Blackfish.

Fifteen-year-old Bindi, mother Terri and the other one appeared on Good Morning America overnight, clad in vivid khaki ensembles and accessorised with a penguin, to make public the pact entered into by The Irwins with the much-maligned Sea Of Surprises™ chain of American theme parks [unaffiliated in all but name with the Australian theme park], reciting with deadly, vivacious precision:

“I’m so excited to be carrying on in Dad’s footsteps and making sure that everything he worked so hard for continues for the generations to come.”

“That’s why I’m thrilled to be empowering kids,” intoned Irwin, noticeably eschewing any mention of Blackfish’s exposé on the traumatic treatment of orcas kept in captivity, where enclosures are likened to the keeping of a human in solitary confinement or a bathtub; in much the same way the Irwins will be kept in a khaki personal branding prison for the term of their natural lives, and then some.

“But plastering her face on SeaWorld’s website won’t cover up the fact that orcas, dolphins, and other animals are suffering in SeaWorld’s tiny tanks after being ripped from their families. Bindi’s talk-show appearances are just a flimsy last-ditch effort by an abusement [sic; word play!] park hoping to make a buck.”

RT if u saw #Blackfish! pic.twitter.com/VnuJOKze9b

Breaking her silence on Blackfish, only an hour ago Bindi retweeted a tweet telling The Haters to “layoff” [sic] Bindi, inadvertently labelling Blackfish a try-hard hater who is totally jealous.

I’ve reached out to Bindi for comment, and also so we could share movie recommendations featuring orcas in supporting roles [I recommended ‘Rust and Bone’ for its heartbreaking performances, powerful narrative and beautiful cinematography].

UPDATE: Bindi Irwin has unretweeted her support of Haters laying off Bindi Irwin. 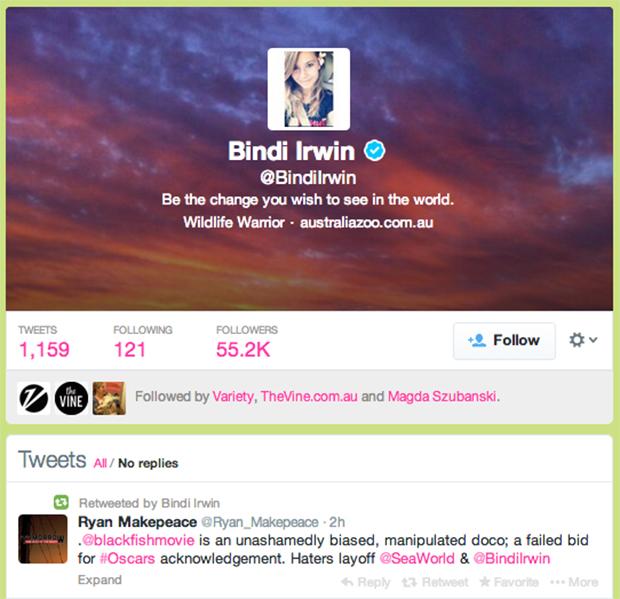