Folks, there is nothing zestier than some royal tea. Celebrity tea? BORING! Royal tea? Take a big bloody sip, that’s the good stuff.

Alex (Deputy Editor) and I have decided to team up and bring you the juiciest, most batshit, most bloody DELICIOUS spicy tostadas of British royal scandals. Because once I read one royal scandal, I need more royal scandals because I’m addicted to their insane English-stick-up-the-ass DRAMA.

Also we imagine this is the Queen’s face during all of this shit:

1. PICS EMERGE OF FERGIE GETTING HER TOES SUCKED

Royals – they do not fuck. Their babies just appear in fancy rooms of Buckingham palace, OK? So what could be more scandalous than alluding to SEX! And CHEATING! Well, kind of.

Sarah Ferguson, Duchess Of York (known as “Fergie” but in the royal way not the “hey Fergie Ferg” way) was married to Prince Andrew. They separated in January 1992, but by August WILD pics emerged in the Daily Mirror tabloid of Fergie having her toes (!!!) sucked by John Bryan, an American financial manager, while sunbathing topless in France.

The scandalous elements here were the fact this was not Andrew – Fergie had cheating rumours following her big-time already – and the fact a member of the royal family had been “caught” in such a private, sexual/kinky act. TBH it’s pretty fucked everyone judged Fergie about something she did in PRIVATE and while single, but here we are. I personally say Fergie, get those damn toes sucked you (not quite) queen.

2. CHARLES’ SEXY “I WANNA BE A TAMPON” CONVO IS LEAKED

Fuck me is this wild. Basically, in 1989 Charles’ phone was tapped. This is bad and do not do this. The tapped convo was between the very married Charles, and the very married Camilla. Married – to different people. It’s basically a sexy times chat, except incredibly shit and boring and British. Think “oh, darling! I want you inside me very much!” vibes. Like if you heard your parents having phone sex except they’re also extremely British.

The convos were published in the early 90’s, and the golden moment that shooketh the world was a particular bit in which Charles said he wished he was Camilla’s Tampax so he could live inside her. OH. MY. GOD. I hate that that image is in my head and I extra hate that it will now be there forever.

Fun fact! New Idea – yeah, the Aussie mag – actually got the scoop over ALL the big name Brit tabloids on this one.

Another fun fact – phone tapping is gross and can we never do that again thanks.

This is such a fucking minefield of a scandal, but the essence is this. Once again, convos were recorded, this time between Diana and her “close friend” James Gilbey. These convos occurred around the same time as the Charles/Camilla ones, so it was just a BIG MOMENT for scandalous royal convos, mates.

Whether James and Diana were just pals or boning has never been confirmed, but that was a big part of the scandal. The other spicy enchilada? The secret fears and opinions Diana dropped.

It’s pretty tame compared to Prince “Can I Be Your Tampon” Charles’ convos, but basically James calls her “Squidgy” a lot and there’s stuff about her being scared of pregnancy and a bit of royal family bitching.

In 2o12, Kate Middleton and her fresh new husbo Prince William went on a nice lil vacay to the south of France. There, in what they thought was a private location, Kate engaged in a bit of your European topless tanning. Like, as if you wouldn’t.

Anyway, some sneaky paps took pics of Kate topless, which were then published by the French edition of popular tabloid Closer. NOT COOL, GUYS. Here’s the juicy bit – Kate took those fuckers to court, and late last year finally won – two people were handed fines of around $66,000AUD, and Closer as a publication was handed a fine of around $160,000AUD. Because FUCK THAT NOISE, right?

5. AN UNDERAGE CHARLES ORDERS A CHERRY BRANDY AT A PUB

In the 60s, possibly the greatest royal scandal occurred, simply because it’s so delightfully cheeky. A 14-year-old Prince Charles walked into the Crown Hotel in Stornoway and ordered a bloody cherry brandy.

Charles was on a school trip, and hit the bar with a bunch of older students – he legally couldn’t order alcohol as he was not 18 at the time. He would have gotten away with this whole caper, too – if not for a reporter lurking around at the end of the bar, who took it national.

6. FERGIE GETS CAUGHT ON CAMERA SELLING ACCESS FOR CASH

Fergie appears a few times on this list, and for good reason: the woman is scandal catnip. This one was widely considered (for a time) to be her biggest gaff to date, when she fell for a News of the World sting operation that exposed her selling access to ex-husband Prince Andrew for £500,000.

Her PR manager would later tell the press that she was horrified her employer had fallen for such a blatant operation, and Fergie would apologise for all the fuss. Oh, sweetie.

It all became a drama bc the journalist was pretending to be a sheik, and Prince Andrew acts as a quasi-official British trade envoy. If it was a politician who was caught they’d be out of a job within the week, but instead, Fergie went on Oprah.

I VIVIDLY remember these pics being splashed everywhere not within reach of the Royal family’s lawyers: Prince Harry, naked as the day he came, clutching his crown jewels as he partied in Las Vegas.

It was the most scandalous picture of a series of pap shots from his wild Las Vegas holiday alongside longtime friend Tom “Skippy” Inskip. Earlier in the day Prince Harry had donned a white fedora – a FEDORA, PEOPLE – to party in a VIP Bungalow at the MGM Grand Hotel, but later on, had got himself tangled up in strip poker game inside a hotel room.

The scandal prompted an international conversation about WTF his security team were doing at the time when they should have been protecting their charge. They weren’t deleting incriminating photos off people’s phones, that’s for sure.

Head HERE to see the infamous pic, and do what you will with The Sun’s 2000 word screed on why they had to publish it. (Ignore it, probably.)

8. PRINCE HARRY GOES TO A FANCY DRESS PARTY AS A NAZI

Once upon a time, a 20-year-old ginger prince who was third in line to the throne wanted to go to a dress up party. He wore a Swastika. 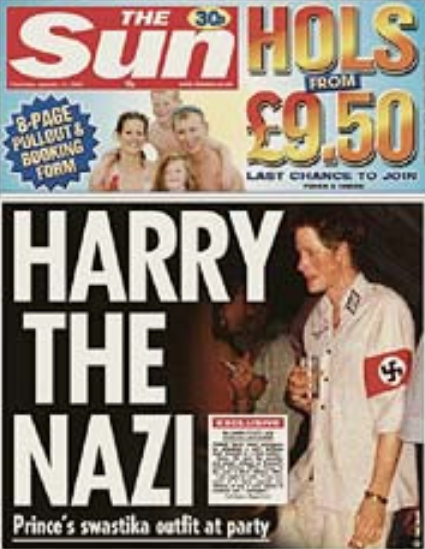 The party – a 250-strong high society affair to celebrate the 22nd birthday of gold medallist Richard Meade’s son, also called Harry – had a “colonial theme”, which is just absolutely taking the piss. Prince Harry’s costume ill-chosen Nazi costume was apparently intended to represent the Afrika Korps, which makes not one lick of sense.

For his idiot child ways, Harry was berated by his father, the British tabloids, the leader of the Tory party and the Israeli foreign minister, but ultimately the whole thing blew over with very little consequences. Shocking.

This is a recent one. Princess Michael of Kent – not to be mixed up with all the other Princess Michaels you know – wore a “racist” brooch to a lunch where she met future royal Meghan Markle.

The brooch, which looks like it weighs roughly the same as a newborn baby, was a “blackmoor” brooch, depicting an exotic African man in a style last popular the same time the royals were last relevant: in the 18th Century.

Although the brooch had been worn many times before, the princess said through a spokesman that she was “very sorry and distressed that it has caused offence”, and promised not to wear it again.

So who exactly is this racist brooch-wearing royal? Her real name is Marie Christine, and she was born to shortly before the end of World War Two to a major in the Nazi SS. She married the Queen’s first cousin, Prince Michael of Kent, and was given the title ‘Her Royal Highness Princess Michael of Kent’ because apparently the British monarchy thinks that makes more sense than anything else.

Cooked, the absolute lot of them.