The Greatest Casualty Of 2010s Reality TV Was ‘Being Lara Bingle’

In 2012, one of the greatest Australian reality TV series to ever exist was born – Being Lara Bingle.

The series focused (obviously) on Lara Bingle (now Worthington), Australia’s “where the bloody hell are ya?” tourism darling turned iconic model and socialite. 2012 Lara was thriving – it had been two years since she’d famously split with cricketer Michael Clarke, she’d had a notable foray into ballroom dancing on Dancing With The Stars, and she’d been modelling in the US for years.

Lara didn’t actually live in Bondi at the time the 10-episode reality series was commissioned, and actually moved into one of those swank $8 million apartments on the Icebergs side of Bondi Beach to film the series, with hopes that the iconic setting would entice overseas buyers.

Unfortunately, it didn’t – the series was canned after just one season, with Network Ten saying in April 2013 “the extreme youth focus that led to programs like ‘The Shire’ and ‘Being Lara Bingle’ being commissioned is not quite right for us”.

Nonetheless it absolutely kicked ass, because Lara was actually super funny and a bit of a fuckwit (I say this lovingly, Lara – read on for more about that) and it genuinely felt like we were getting a glimpse into her life.

Some top moments, in no particular order.

1. When She Found Out Michael Was Dating Someone New

I cannot find video of this, and can only vaguely remember the details – but I recall being deeply emotional about the moment Lara learned ex Michael Clarke was dating now-wife Kyly (or maybe they got engaged??? Can’t remember). Lara literally let these cameras see her at her worst, it was a real vibe.

2. How She Took Her Washing Over To Her Mum’s Place

Ok this has video footage – Lara taking a giant basket of her dirty undies over to wash at her mum’s place. MOOD. I did this circa 2012 – 2016 and I feel no shame in it. To be fair, I did my own washing, just at my mum’s place because I CBF buying a washing machine. But still! Leech off those parentals!

3. When She Drove In The Bus Lane And Got Caught

Hooley dooley, this is my favourite Being Lara Bingle moment, because I literally drive the road she got stopped on DAILY and have used the bus lane to quickly get around the snake of traffic and into the left-turning lane MANY A TIME.

Basically, Lara uses the bus lane like all Bondi locals do (it’s FINE guys when you’re just getting to the turning lane! It’s not assholey!) and gets pulled over by the cops in the process. Never have I related more to this woman.

4. When Her Brother Maybe Boned Someone In Her Bed

IDK why this is H2Coco branded, but early on in this clip there’s the ICONIC scene where Lara and BFF Hermione confront her brother Josh about what he’s been doing in the Bondi pad while they aren’t there. Specifically, why Lara’s sheets are covered in fake tan when she doesn’t use it.

TBF I smell a rat because Lara then released that whole fake tanning line, but still. What a time.

5. Everything To Do With Josh, Actually

Josh was legit the Shit Bingle, not just because he clearly slept with women in his sister’s bed who also alarmingly were going on dates/one night stands WHILE WEARING FAKE TAN, which is chaotic energy at it’s highest peak, but because he… well, literally said he “doesn’t like fat girls” and dates skinny girls because they eat less, and also because he kept getting into dramas like being busted for drugs and shit.

When he was funny, he was hilarious. But mainly we were laughing at him. Sorry, Josh.

6. When She Did A Massive Shit On TV After A Colonic 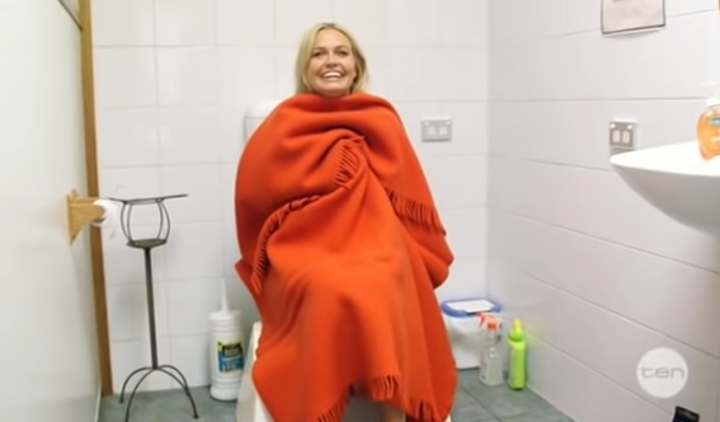 You guys, Lara fucking Bingle did a SHIT ON TV. Legit – she gets a colonic hydrator or something, basically a bunch of water pumped up her butt, and afterward you have to go to the toot immediately. They filmed all of this.

Reality TV in the 2010s was just a better place.

READ MORE
I Still Have Trust Issues From The Taylor Swift Vs. Kanye West Feud Of The Decade