Three Bings for the Bingle family under the Sutherland sky
Seven for the Tailor Maid PR lords, in their halls of stone and Fendi fur,
Nine for the nine of us watching this show alone, doomed to die,
One for the Clark Lord, on his Clarkey throne,
In the Land of Bondi, where the hipsters lie.
One Bing to rule them all, One Bing to bind them,
One Bing to fly us all to New Zealand and in an igloo bind them.

Can you hear that? No, it’s not the sound of Mr. Tolkien rolling over in his grave, nor is it the sound of Peter Jackson abandoning all hope for a Hobbit Trilogy; no, it’s the sound of our heroine Lara Bingle warming up for her swan song. It’s sounding a bit pitchy at the moment, but there’s time yet to improve as we approach the pointy end of Being Lara Bingle S01.

I thought tonight’s episode was perhaps this season’s penultimate, but that doesn’t sound right because no one on this show has a pen license and neither could this show be described as ‘ultimate‘. That doesn’t make much sense, but who needs to use words correctly when you’ve got dramality television, right Australia? Right.

Here’s something I prepared earlier for tonight’s episode, because I am an anxious Millenial with better things to do that I actively ignore in favour of devoting all my time to non-activities like this! 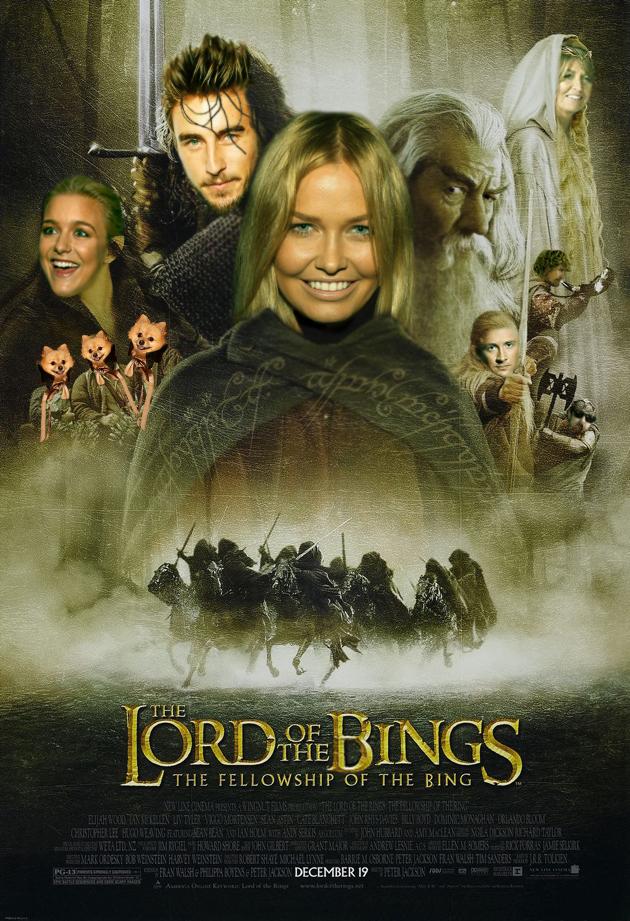 In case you’re wondering whut the hull is going on here, this week’s edition of the BLBLB is New Zealund themed on account of all the overZealous Air New Zealand cross-promotional eckshun. Hence Lord of The Bings. Heads up, I will probably drop in and out of writing phonetically in a New Zealander’s ecksunt from time to time. Lit’s do thus thung!

8:10 – So I missed the first couple of minutes. Hey! I’m just finishing my risotto, give me a break. We’re in New Zealand with the gang sans Hermy1 shooting Lara’s Kiwi Sceptics Air New Zealand commercial. The New Zealand equivalent of Le Bing, snowboarder, blonde and one-time missus of an NZ sporting captain whose name I didn’t catch, Hayley Holt, picks up our gang at the airport and whisks them away to a picturesque lakeside lodge at the foot of some beautifully snowcapped mountains. The scenery is pretty very stunning, as is Lara’s Jeremy Scott x Adidas Originals sweater (pls send one this way thx Jeremy).

8:13 – Lara is going heliboarding for the first time and looks incredulous when she’s told she might have to use a shovel in an emergency situation. Her face is all o_0 like that. In a fittingly all-black ensemble replete with customary Josh Goot, Lara & Co. take off and land on the top of an incredible mountain peak/ridge/can’t remember much from Year 10 geography. Ugh. I want to go to New Zealand. Mission Accomplished: Kiwi Sceptics. And cue a snowboarding montage *swoosh*.

“I’m in heaven. This is possibly the most beautiful place I’ve ever been. If this is called work then I want to do this everyday.” Heard that gurlfrand, but I’m pretty sure you do get to do something like this everyday, or at least as close to it as any of us are ever going to get.

8:19 – Do you need advice? Channel 10 are currently casting a new show for people with problems. It’s called Therapy The Audience, and it sounds terrible.

8:20 – We’re at Base Camp, also known as Lara’s Overnight Igloo Quarters. Looks like Lara is camping in a pretty #luxe igloo with catering with flattering lighting. Lara and Hayley are really bonding because they live “parallel lives… She likes boxing, I like boxing, we’ve both dated captains of professional sports teams. She now sports presents. That’s one job I wouldn’t do.” That’s probably one job we wouldn’t have you do either Laz. Although I do think Ten perhaps could have capitalised on Lara’s SEO status and sent her to London to be their OG (Olympic Games, not Original Gangster) cultural correspondent or something. Whatever. Don’t listen to me Channel 10. Keep making all those stellar decisions you make so well on your own. Please don’t bury me, Gina! Anyway. I’m not so sure I believe that Lara slept in that igloo, but if she did, kudos Lara. You might actually be something of the tomboy you claim to be.

8:22 – ERMAHGERD there’s paparazzi on the slopes! How did they find Lara? All the choppers are a dead giveaway apparently. Whoddathunk? The paparazzo says he “can find you anywhere” so naturally Lara says “Hats off to you for finding me” and not “get the fuck away from me you creep.“

8:29 – Lara’s doing some radio appearances on NZ radio stations. LOL callback is hilarious thanks to Reggie, a frequent called and a creep (according to the DJ). He really likes Lara. Join the queue, buddy! It’s not very long. Ah, as always, watching televised radio makes for excellent viewing. My face is all like -_- that.

8:30 – Now we’re doing some breakfast television appearances. Lara is being probed constantly about Michael Clarke. Okay, cool, we get it, she dated Michael Clark. His new name is Legolas but whatever. The breakfast TV host brings up Lara’s nekkid Brendan Fevola shower photo and Lara is hit for six. Is that something people say? In New Zealand at least? Stumped, perhaps?

“It was a complete invasion of my privacy,” says Lara. Kinda like what is happening right now. Le Bing is – to her credit – being a total pro and sticking to her H2CoCo script, but I kinda feel like she has every right to tell this dickhead ‘Hey why don’t you take down this topless photo of me and talk about something else.‘ That’s what I would’ve said, Me: Lara Bingle’s most internally-conflicted advocate.

8:33 – Insert TIME LAPSE PHOTOGRAPHY to let you know that we’ve just endured the passage of time through the wonders of The Tele Vision. We’re back in the bathroom at Bondi, where The Herms reclines in the bath while Lara puts on her face before she goes to meet her lover/gentleman friend. They’re discussing Girth Merdy, new name Aragorn! ‘Tee he he boys shoes boys,’ that’s what they talk about and there’s no possible way to make that interesting.

8:39 – Hey Sharon, aka Galadriel Bingle, how are you? Famillia Bing are assembled for a roast dinner of something. Josh pulls two vac pack Gravox bags out of the oven without mittens. Idiot. That’s not how you make gravy Josh, please consult Paul Kelly (Australian 90s rock reference) for a good recipe and method on how to make gravy. Poor Sharon, she’s so lost in the dinner conversation. Both her children are discussing spooning/forking/safe sex practises over what I think is chicken. I’m sure the chicken is fine but eating dinner with a camera crew and the exchange taking place between Josh and Lara is enough to leave a foul taste in anyone’s mouth.

“My sister’s really easy to take the piss out of because a lot of stuff just flies over her head. I don’t know if it’s the blonde thing.” More of this face -_- from me. Funnily enough – or not at all – the family are drinking Two Italian Boys wine for dinner, which is also the wine they served at Lara’s birthday dinner last week. You know what’s also really funny – but isn’t actually funny and is just another instance of this show’s transparent in-show product placement – next week’s episode also features a wine tasting! I don’t know about you, but I like my wine like I like my product placement: thinly-veiled and completely tasteless! Kidding. Pass the shiraz.

8:44 – ‘Thet’s a wrep!‘ said Peter Jackson when he finished directing tonight’s episode. I was right (I never get tired of saying that) in thinking that tonight’s episode was in fact the penultimate one. Next week’s season final features loveable series’ bookend Nana Bingle, said wine tasting (Two Italian Boys, pls send samples thx) and a cooking class with George ‘Mastermunchkin’ Calombaris. Can’t believe we’ve reached the season final. I predict lots of this face ;'( but probably not. I will certainly miss being Lara Bingle, because being myself is no fun at all obviously (see laborious photoshop job above).*