Journalism students from Macleay College are saying their degrees have been cancelled just two weeks into the course.

Macleay is a private tertiary institution with campuses in Sydney and Melbourne. Macleay students say that on Friday arvo, they were sent an email saying their degrees would be cancelled due to low enrolment numbers. 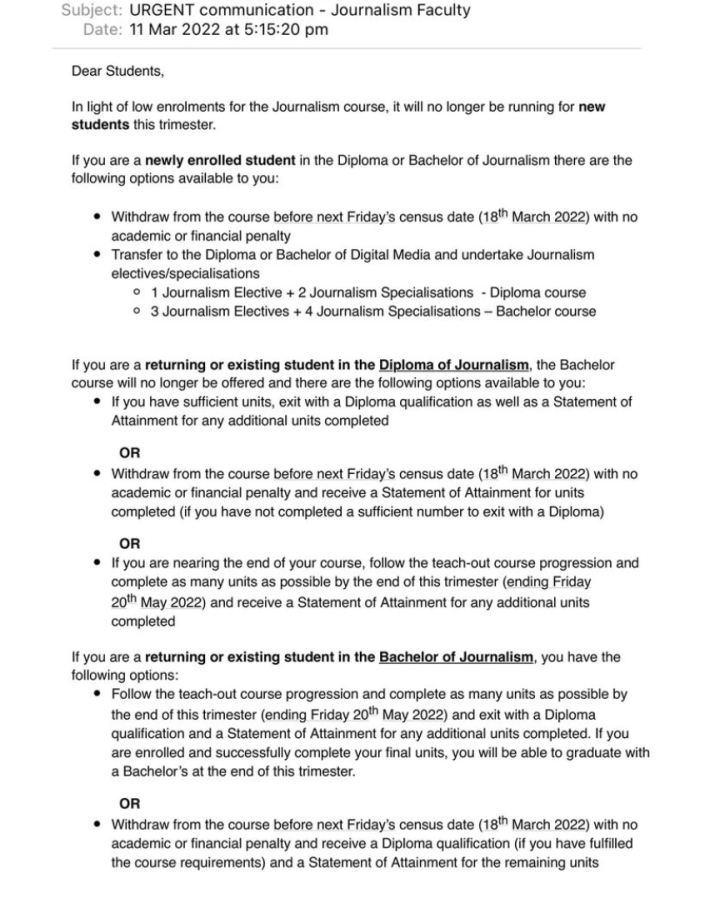 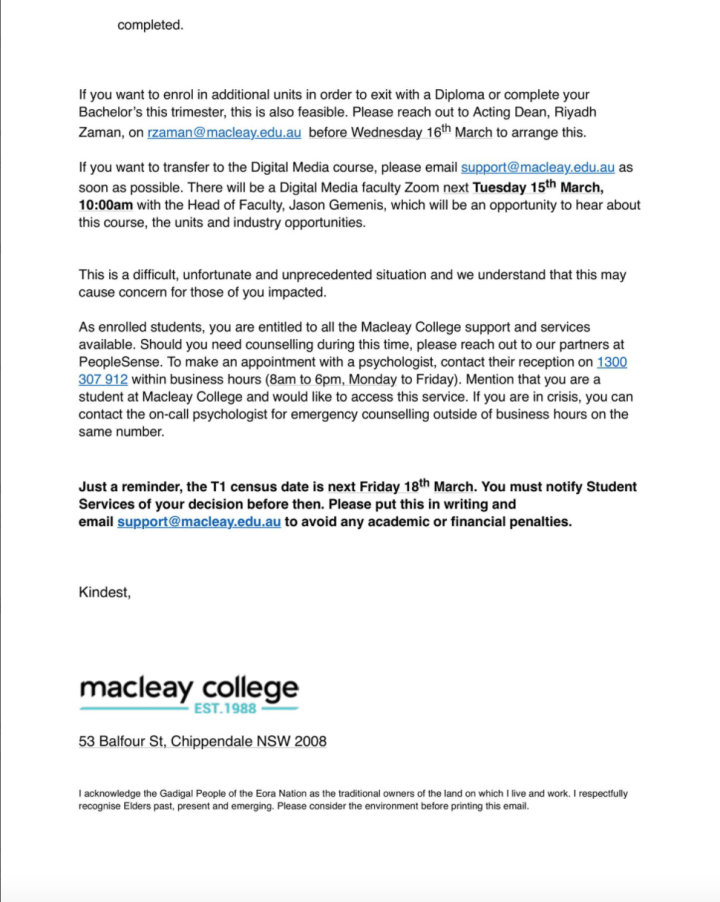 The email states that first-year students can either switch to a digital media course or withdraw and receive a statement of attainment for their completed units.

Macleay College also requests that the students inform it of their decision by the census date on March 18.

This would leave the students with an extremely short time to make such an important decision.

PEDESTRIAN.TV reached out to first-year student Ezra Bell about the course’s sudden cancellation.

Since the unexpected email on Friday afternoon, Ezra noted that the uni hadn’t provided any further support to students.

“There’s been no communication from the uni they’ve really just hung us out to dry.”

“Why couldn’t they have said this to our faces?”

Ezra doubted that enrolment numbers were the reason for the shutdown.

“What’s the real reason because we all know low enrolments is not the case.”

This point was echoed by another Macleay journalism student Kelsey Richmond. Richmond claimed that student enrolment numbers had actually increased.

The journalism student enrolment numbers were going up. The claim that the cohort was too small is false. This is a sad outcome for everyone in this course.

Macleay students have taken to Twitter to vent about the experience.

Every single student has moulded their lives around this degree and now without any warning it’s been for nothing. 2/2

I quit my job, moved four hours away and paid ridiculous amounts in rent to go study journalism, I imagine many of these students would have done the same. My thoughts are with them https://t.co/8Pe8WphmXs

Still reeling from the news that Journalism has been cancelled at @MacleayCollege. The more I think about it, the more outrageous it really is. An email sent to us on a Friday at 5:15pm? Telling us our degree is cancelled? Not okay @9NewsAUS @9NewsSyd @7NewsAustralia @7NewsSydney

The Media Entertainment & Arts Alliance (MEAA) confirmed on Saturday that the degree had been cancelled. The union estimated around 48 students would be impacted.

About four dozen journalism students have been given three days notice of the cancellation of their course; staff will also have to look for new jobs. Sad day for journalism education in Australia. Not good enough @MacleayCollege. #MEAAmedia https://t.co/H0exhKLKGn

Student Chelsea Caffery claimed the college told students to reach out to psychologists if they need it. But the university’s mental health services don’t re-open until Monday.

Macleay College advised the dumped journo students to reach out to the psychologist if needed. Funny that. The psychologist isn’t open until Monday morning, and we were informed of the cancellation Friday afternoon. So I guess mental health can just wait til Monday, right?

Chelsea further alleged that staff weren’t aware that the degree was going to be cancelled.

“To be told on a Friday afternoon after hours is really heartless,” Chelsea told news.com.

It seems all the incredible staff from the Journalism department was blindsided as well. The head of Journalism only found out minutes before the students did… after 5pm… on a Friday… seems like they didn’t want to give anyone a chance to question it.

The college hasn’t released a statement about the situation yet, but it’s already copping flack online.

As a @MacleayCollege graduate I am appalled by the way it has cancelled its journalism course. The future of our industry needs to be nurtured, and their dreams encouraged. If any students would like to get in touch for any advice or just to chat, please, please do.

You have failed in your duty of care @MacleayCollege https://t.co/3nDmFZ0414

I have been a lecturer with Macleay for 6 years. Some incredible journalists have come through this place and to pull a course with no thought for the current students is just so heartless https://t.co/eHuUmDVgh1

This is unbelievably heartless by Macleay College. Cancelling a degree two weeks into semester and informing students after hours on a Friday. Genuinely stunned by the lack of care being shown here. https://t.co/StIyREQBxX

The journalism student enrolment numbers were going up. The claim that the cohort was too small is false. This is a sad outcome for everyone in this course.

As pointed out by RMIT Journalism lecturer Dr Alexandra Wake, most universities have now closed their enrolments.

This means it could be really hard for those students to re-enrol in other degrees.

It’s a very difficult time for this decision to have been made with first semester enrolments now closed at most universities – and it’s a long weekend in Victoria. Not sure what offer other unis can make but am looking into it.

On top of everything else, Macleay college’s degree in journalism isn’t cheap.

It costs a whopping $54,000 to complete all 24 units so the potential financial burden on students is enormous.

The university is owned by fashion entrepreneur Sarah Stavrow. She told news.com that she would not be commenting.

At the time of writing, Macleay college has not responded to PEDESTRIAN.TV for comment.