Adelaideans Won’t Get Uber, Will Get Dogged With Taxi Compo Levy Anyway

Adelaide people, R U OK? If you are a mere civilian, you shouldn’t be – you should be at least a little bit angry.

ICYMI, the other day we got into contact with ride-sharing masterminds Uber; they had just announced that they were pulling all plans for UberX out of South Australia, because it was too dang expensive.

Uber released this graph, which estimates the comparative costs between NSW, ACT and SA. It’s entirely understandable that no person in their right mind would agree to sign up to be an Uber driver in SA, because those $ amounts are absolute bollocking madness:

However, there’s been mad development since then. Basically, the state government has come out and said that Uber are talking a bunch of wank (not verbatim, shockingly).

Transport Minister Stephen Mullighan accused representatives of walking out of meetings to try to negotiate Uber’s existence in Adelaide. Spokespeople accused the government of ‘slamming the door in their faces’.

Mullighan said he asked the representatives why they released misleading and incorrect information “about the costs and requirements to enter the SA market”:

“They chose not to elaborate and when I asked that they take my concerns about their behaviour to the Australian managing director, Uber instead left the meeting.”

State Premier Jay Weatherill jumped in, saying that his government would not “be dictated to by a multinational corporation”.

“The Government made it clear that they were not willing to engage in a meaningful discussion about the roadblocks to economic opportunity in South Australia and appeared to make veiled threats instead.

We would like to be in South Australia but the regulatory framework that the Government has in place from July 1 is not viable.”

Mullighan’s department has released their own table of comparative costs, mimicking Uber’s earlier one: 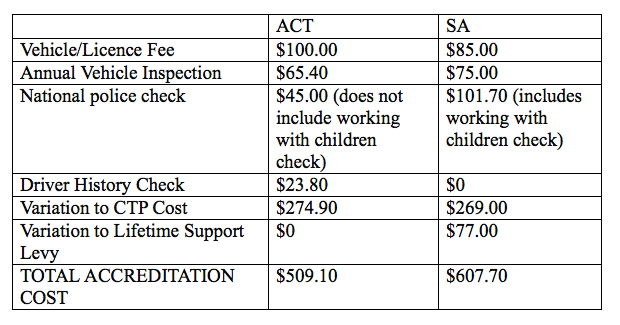 Which is all well and dandy, except Mr Mullighan still has a few things to explain.

Firstly, NSW is missing from his table, so one could perhaps assume Sydney’s costs aren’t too dissimilar to what Uber projected. This would then beg the question, why are SA’s rates so much higher?

No matter how you frame it, SA’s rates are unfeasibly high. They stop not only Uber, but also small ride-sharing businesses from even attempting to enter the market. Instead of a slanging match, it might be worth taking a look at the actual issue.

Secondly, Mullighan has also come out regarding the taxi compensation levy – the extra $$$ that you now give to taxis on government orders, because they’ve chucked a tantrum that they no longer hold the monopoly on the industry.

Mullighan is still bringing in the compensation levy in Adelaide – despite taxis not actually having any competition.

Adelaideans are pretty fkn mad, as you would be. But Mullighan reckons other ride-sharing operators are going to enter the market, so the compensation levy should exist now:

“Whether it’s Uber or … someone else that still means that taxi industry assistance is necessary and that’s why the levy and compensation payments are scheduled to continue.”

Because nothing says good government like bringing in reactionary laws for something that might not happen, right?! And the chances of small ride-sharing business being able to weather the current SA driver costs are slim to none.

The compensation levy includes $1 on top of all cab rides, and a whopping 20% fare rise on weekend nights to help fund compensation for drivers and taxi owners for loss of business. They are expected to raise $80 goddamn million over the next ten years.

So, to our dear South Australian readers – get mad. Something is fishy as hell here. Make some noise.