Want A Really Good Reason To Visit NZ This Year? Here, Have Eight

You might think Australia‘s really far away from most of the world – and you’d be right – but some of the globe’s best offerings are only a stone’s throw / short flight away, like the scenic offering that is New Zealand. It’s got a whole hell of a lot to offer, and, well, it’s kinda crazy if you don’t visit the neighbouring country while Down Under. PEDESTRIAN.TV has teamed up with Tourism NZ to show you all what’s around the corner. Check their Facey HERE and website HERE.

Yep, if you’re currently living or backpacking on the East Coast of Australia (NSW / VIC / QLD), the greenery of NZ is legitimately closer to you than other states / territories Down Under, fairly affordable for us young folk, and technically overseas for you bucketlist kind of people.

We mean, you wouldn’t go to the UK without dipping your feet in some Euro soil, would you?

Australia’s neighbouring country has so much to offer, including landscapes, adventuring, Lord of The Rings sets and ridiculous amounts of sheep, plus a whole bunch of events to give you that little push over the Tasman Sea. Even though it’s only some-2,000kms away from Aus, it’s got plenty of experiences that you just can’t achieve here.

Whether you’re an Aussie native or backpacker, here’s what’s happening over the next six months, in chronological order, to align with your trip, bro: 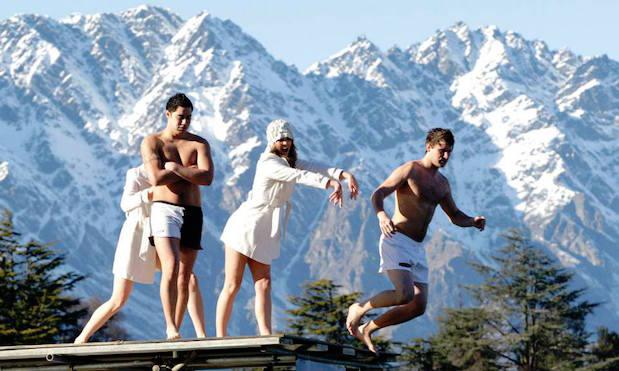 Good news for those who reckon they love the cold – Queenstown holds a 10-day celebration of winter with street parties, fireworks, local acts, comedy and all-round tomfoolery to welcome winter to the area. Around 45,000 people will be alongside you in this one, so prepare to meet a sweet honey / new mate in front of an ultimate backdrop.

HOW TO GET THERE: Queenstown Airport offers international and domestic flights. Buses leave regularly for the 10-minute drive to Queenstown’s CBD.

WHAT ELSE YOU CAN DO IN QUEENSTOWN: Queenstown is one of NZ’s top visitor destinations, namely because it’s home to the adventurer’s bucket list. There’s bungee jumping, sky diving, canyon swinging, jet boating, horse trekking and river rafting all year round.

Wouldn’t it be nice if there was a festival all about chocolate? Prayers answered, people, and you can see it come to life on the world’s steepest street – Baldwin Street – in DunedIn, South Island. THERE ARE CHOCOLATE FACIALS AND A CRUNCHIE TRAIN. A Kiwi fave – Jaffas – are also hurled down the street in a weird tradition that we could totally see ourselves getting into (watch above).

HOW TO GET THERE: You can catch domestic or international (Brisbane only) flights to DunedIn Airport, or it’s an easy bus ride from Christchurch or Queenstown. Distances within DunedIn are small, so taxis are cheap and convenient.

WHAT ELSE YOU CAN DO IN DUNEDIN: Considered the Edinburgh of NZ, Dunedin‘s natural attractions are both unique and fascinating. If you’re a penguin lover (e.g everyone), The Otago Peninsula is the breeding area of the Little Blue Penguin (the world’s smallest penguin) and rare Yellow-Eyed Penguin, and you can also spot sea lions and seals here as well. The beaches here are also beautifully rugged, so definitely take up that opportunity too. 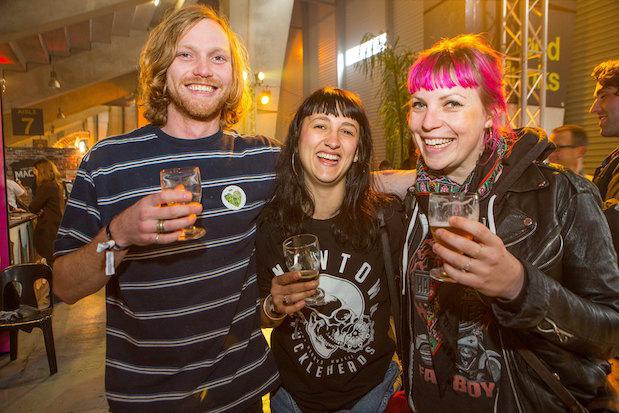 Get around NZ’s most popular beer festival with this year tipped to be the biggest / best in the event’s 15-year history. There’ll be themed bars, A+ collabs, food to line those stomachs and over 300 different blends from up to 60 breweries.

HOW TO GET THERE: Both international and domestic flights arrive at Wellington Airport, and there’s also a major train station, Wellington Railway Station, serving the area. From the station, Beervana / Westpac Stadium is a short stroll away.

WHAT ELSE YOU CAN DO IN WELLINGTON: Wellington is a cafe hub, and is also the film capital of NZ. After you’ve devoured the best brekky you could imagine, hit up a Wellington movie tour, many of which will include the Weta Cave – a mini museum featuring movie props, collectables and behind-the-scenes footage. 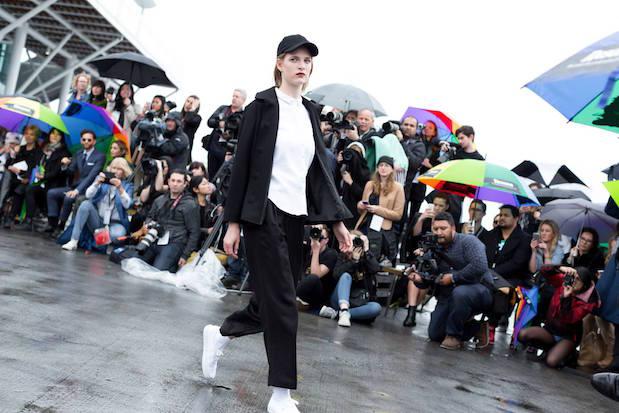 While you might not be able to get into the exclusivity of NZ Fashion Week, it’s the perfect time to align your trip thanks to the nightlife happenings that surround it. Britomart is the place to be for all the local watering holes, and Viaduct Events Centre is where you’ll see the style peacocks doing their thing. Contiki‘s ‘The Big Tiki‘ trip runs through Auckland, meaning you’ll be able to stop through the fashion charade seamlessly.

HOW TO GET THERE: Auckland Airport is NZ’s largest, with international / domestic flights arriving and departing daily. To get to Viaduct Events Centre from the airport (20 km), you can easily get an Airbus Express, Shuttle Bus, Taxi or car rental. Conveniently, most of Auckland’s trains, ferries and buses depart and arrive at Britomart Transport Centre where you can take on the town.

WHAT ELSE YOU CAN DO IN AUCKLAND: All within an hour’s travel from Auckland CBD, you can also explore 16,000 hectares of native rainforest and coastline in the Waitakere Ranges, chill by the rocky shores and underwater cliffs of Goat Island Marine Reserve, take a dip at Auckland’s best kept secret – Tawharanui Regional Park – and discover the history and character of the area in Devonport and North Head. 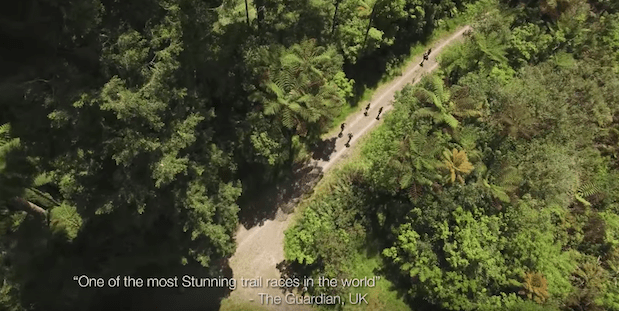 If you want to incorporate some exercise into your travels and see the lush greenery while you’re at it, this is the event for you. Starting at Pohutu Geyser in the Whakarewarewa Thermal Field and ending at natural hot water pools at Mt Tarawera, you’ll see a hell of a lot of stuff along your travels including sheep (yay), forests, Woodstock Farm, Green Lake and more.

HOW TO GET THERE: Domestic flights to Rotorua Airport depart daily from Auckland, Wellington, Christchurch and Queenstown. From there the Town Centre is only a 10-min taxi drive away. Alternatively, you can grab a shuttle bus from Auckland Airport to Rotorua, which tends to be cheap.

WHAT ELSE YOU CAN DO IN ROTORUA: This is your chance to get ~ up close and personal ~ to bubbling mud pools, shooting geysers and natural hot springs so you can truly relax after your marathon. While it’s perfect for chill / selfie time, it’s also got a great deal of options for the adrenalin junkie. Check it all out HERE. 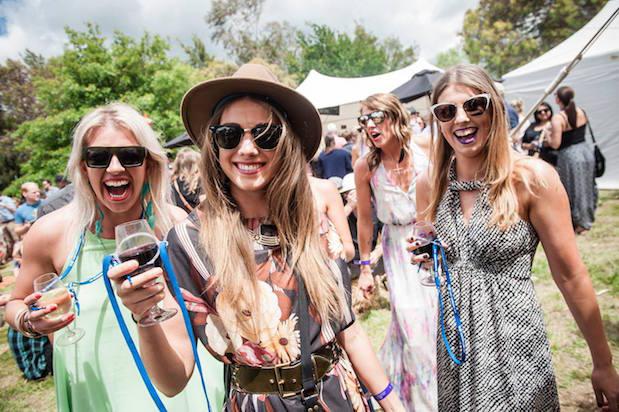 We all know that NZ produces some phenomenal wine (namely because it’s the go-to at the local bottlo), so why not enjoy that liquid with some class? This wine, food and music festival has a great reputation, and it’s a great day out with the mates / perfect for slow kick-ons while chilling amongst the vineyards.

HOW TO GET THERE: Buses to Toast are available from Wellington, Palmerston North and Wairarapa. We’d definitely trail your Wellington visit with Toast, considering the close proximity.

WHAT ELSE YOU CAN DO IN MARTINBOROUGH: Hire a bike and hit up the 20-odd wineries and colonial charm throughout the region. 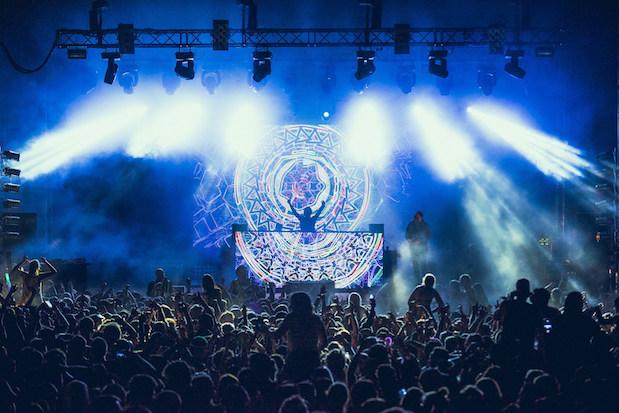 This three-day NYE festival has hosted A+ artists like N.E.R.D, Wiz Khalifa, Moby, The Kooks and Calvin Harris, so, really, it’s no wonder that it’s been crowned as NZ’s best festival / camping experience. The line-up for 2016 is yet to be announced (no doubt it’ll be a doozy when dropped in August) but you can already snap up tickets from $215 NZD.

HOW TO GET THERE: Gisborne Airport is only an hour’s flight from Auckland and Wellington, and a further 10 min drive will get you to Gisborne i-SITE, where buses to the festival depart from.

WHAT ELSE YOU CAN DO IN GISBORNE: The Rere Falls and Rere Rockslide are a must and will make you feel like a kid again. Inland from Gisborne on the Wharekopae River, the smooth rock formation is 60m long and at an angle of about 30 degrees, with water rushing through and making for a natural waterslide. Considering you’re at the most easterly point in NZ, you’ll also want to snap up a sunrise at one of the Gisborne‘s pristine beaches. 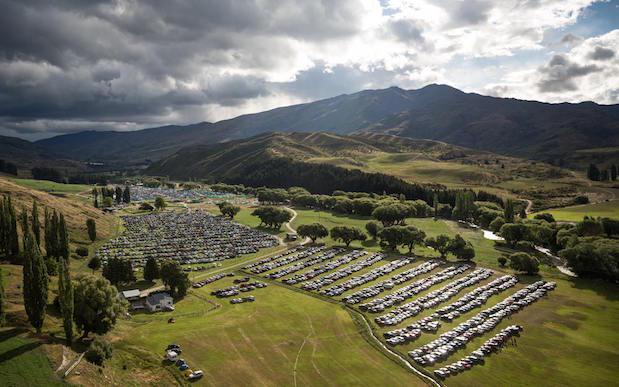 In case you missed it, New Zealanders are a rhythmic bunch. Bring in your new year differently to most festivals, with this event running from midday NYE to sunrise NYD.

HOW TO GET THERE: There’s plenty of buses and shuttles from Queenstown to Lake Wanaka, considering it’s less than an hour away, as well as buses from DunedIn, Christchurch, the West Coast and more. Wanaka Airport is also only 10 mins from the lake. Buses into the festival run from both Queenstown and Wanaka.

WHAT ELSE YOU CAN DO IN WANAKA: Be sure to check out NZ’s fourth-largest lake – Lake Wanaka – for all the double-tap worthy panoramas. Jump in a kayak, get on a jetski and take in the crystal clear waters.

So there you have it – there’s plenty of events for you and your mates to do in between all that sight-seeing / thrill-seeking.

The grass really is greener on the other side (of the Tasman Sea).

For more info on all the A+ things you can do in NZ, head HERE.