To WEHO We Go: A Beginner’s Guide To West Hollywood, LA

We’ve all been subjected to carry out unorthodox and somewhat uncouth requests from our employers at some stage or another. Think: walking their dogs, anonymously abusing their local MP, calling their mate Kev and letting him know how ‘off bone’ the ensuing weekend is expected to be. Wanna know what’s worse than carrying out menial/questionable tasks for them? Editing their international indecencies. We’d like to introduce you to Mr Oscar Martin – PEDESTRIAN.TV’s Co-Founder, Travel Editor and resident hedonist. The good, and admittedly misguided people at Visit West Hollywood generously set Oscar up with everything he’d need to have ‘a time’ in the area. If my boss’s trip has conjured up an appetite for ~wanderlust~ then head over to Weho’s website HERE.

Full disclosure: I’ll start by saying I’m a sucker for fancy hotels, delicious food and exotic travel destinations. A few years back I cottoned onto the magical concept that as a Pez Co-founder/Travel Editor, my exploits (as well as those of my buddies) would be grossly subsidised in exchange for a few pretty pictures and honest opinions – exhibit A, B, C, D.

This self-indulged schmuckery certainly contributed to the desire to launch PEDESTRIAN.TV’s dedicated travel section. Of course, finding that 81% of you are planning an overseas trip in the next 12 months also came into play somewhere along the line, also.

LA is a big place. You’ll want to visit Silver Lake, Venice, Santa Monica, Beverley Hills and Downtown to truly get the La La Land experience. However, If you’ve only got two days (ideally en route to Burning Man), I’d recommend avoiding the traffic and maximising your time in West Hollywood. What follows below is a dummy’s guide (I’ve been twice) to @visitweho – If done with close friends and positive vibes, you’ll be well prepped for your onward adventures.

You’re going to want to make sure wherever you choose has a pool. LA is damn hot.

The hotel’s bio says it all – “place to see-and-be-seen. It’s where glamour and fantasy prevail,”. Think Entourage. Plush white rooms, cloud like beds, pool parties, etc… If you’re after peaceful sleep-ins and discreet tanning by the pool, this place isn’t for you.

Another solid choice is The Standard, 100m up the road:

Friends stayed at Petit Ermitage, which they said was incredible.

A must visit. It gives me huge satisfaction to see friends succeeding in their entrepreneurial endeavours. Part owned by a couple of Aussie legends, you’ll feel instantly at home.

E.P Asian Eating house and L.P Rooftop Bar has quickly become a celebrity hotspot with mouthwatering food and 360 degree views of West Hollywood. The atmosphere is electric and will be the perfect prelude to LA nightlife.

Owned by two Australian restauranteurs, this place was magical. I couldn’t recommend it more. The open area and views are dreamy. If you have two dinners in West Hollywood Eveleigh has to be one of them.

Pro-tip: Keep an eye out for this handsome fella below. Exceptional cocktail skills.

If you’re feeling like a fancy lunch, check out Cecconi’s. Aussie friends living in LA-LA-land put this place at the top of their midday meal recommendations. Cnr of Melrose Place and Robertson Boulevard – You Fancy.

@weho hooked us up with a lovely meal at Connie & Ted’s. You’ll find a smorgasbord of fresh fish, oysters and crab that was delicious.

There are very few places to get good coffee in LA… Alfreds is one of the best.

I challenge you not to eat here. They’re everywhere. And grossly amazing.

Don’t be disheartened if you’re not let into any of the below places. LA door people are dicks. Put on your Australian charm (and spruik your far better looking female friends) to breakdown dick mentality. Once you’re in you’ll have to work fast. Clubs close at 2AM… More often than not you’ll end up at a house party close by so don’t stress too much if you’ve just found your groove when you’re ushered to the door.

Start the night with a cocktail at Chateau Marmont. Technically not in West Hollywood (very close) this Absolute iconic venue with decadent bar, rooms and restaurant. Sofia Coppola shot her film Somewhere at the hotel in 2010. Numerous pop culture personalities have taken residency here including Jim Morrison. Artists have produced work from within the hotel’s walls including Tim Burton, Annie Leibovitz, Billy Wilder and Hunter S. You’ll really feel the history the moment you step inside.

It’s probably not a great idea to attempt a group selfie with Turtle from Entourage while he’s standing against a urinal! However, the fact I did suggests I was having a great time. We went here twice in two days.

Hidden on the sunset strip (from memory we entered via a car garage) Blind Dragon is an Asian-inspired lounge with private karaoke suites. This has every ingredient for an unforgettable night. We started the night in the karaoke room and stumbled out to an electric dance floor grinding to old school hip-hop. There’s every possibility you’d bump into Rosie Huntington-Whiteley and other notable Hollywood A-listers.

Do do doop dooo:

This is my favourite place to visit in LA. Why does this not exist in Sydney/Australia? Every time I leave this place I’m fuelled with desire to start something similar back home. This is actually the cure to jet lag/a hangover/feeling flat etc…

Let me break it down: You’ll be given a locker key on entry where you change into your swimmers and proceed to the main area (Wi Spa, downtown LA is amazing also… However you go full naked… Quite the experience). I usually start with a bit of a swim in the pool followed by jet-spa and then work my way down the line of European and Asian style saunas and scrub rooms progressing in room temperature. In between each sauna, challenge yourself to go head under in the freezing plunge pool then under the many open showers. I’d then proceed to the bar to order up a fresh juice, have a bit of a snooze in the sleeping/couch room and wake with a $10 mud mask (pictured below) followed by a pre-arranged massage treatment. Repeat and repeat for as long as you desire. For $100 you can get a facial, massage and use of the spa facilities (for as long as you like). 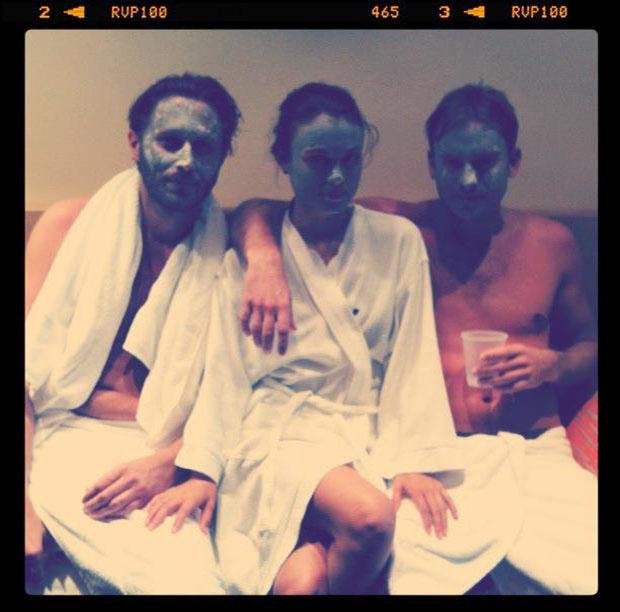 Rynyon Canyon is LA’s answer to Bondi-Bronte… The only difference is it feels like you’re running in the dessert. It’s STEEP. And Hot. The three idiots below could be the first Australian’s to run to the top with no sleep :/

Hiked #runyon with a bunch of sexy Australian Bros this morning. #cobrafitnessclub

Team up with Mark – The Cobra Snake Fitness man to increase the burn.

If Oscar’s adventures have you gung-ho on your own trip to West Hollywood, visits WeHo’s website HERE for a further 411.