In South Africa, rhinos are in grave danger. They’re the most at-risk animal when it comes to poaching, and the results are devastating.

The statistics are horrendous. While there has been a decline in rhino poaching since 2015, according to Save The Rhino 2018 saw 892 African Rhinos poached in Africa. With 80% of the African Rhino population of Africa based in South Africa, the issue is very much at the forefront of conservation efforts in the country. 769 of that 892? Poached within South Africa.

The African Rhino is so at risk because it’s horn is used in traditional Chinese medicinal practices. Because of it’s difficulty to obtain, it’s considered a sign of wealth and prosperity to be in possession of rhino horn, which hikes the prices up and makes poaching a very appealing option for trade.

I visited South Africa with South Africa Tourism in September, as part of a trip showing media the effect of poaching and the conservation efforts of different companies in the regions affected. One of these is Kapama Private Game Reserve, a massive 13,000 hectare sanctuary with three camps and a commitment to protecting it’s wildlife.

One way they do this is by rhino notching. Some reserves will de-horn their rhinos in an effort to protect the animal – many poachers will just slice the horn and face off a rhino to get what they need, leaving the animal to suffer a horrible death. De-horned rhinos are generally safer in the wild as they don’t have the precious horn to make them appealing to poachers. But Kapama were interested in keeping their rhinos as close to their natural state as possible, so they practice rhino notching – a process that involves a few steps to keep track of the rhinos, and also to make their safety a priority.

First, we waited in a safari vehicle while a tiny helicopter flew above the rhino pack that had a rhino that hadn’t been notched yet within it. Notched rhinos are recognised visually – a small part of their ear is cut out for identification purposes. Our tracker found a rhino without a notch – often these are grown babies or simple rhinos that had been AWOL in the 13,000 hectares of bush.

They then inject the rhino with anaesthetic around the horn, and also near it’s ear. We ran in to assist – we were immediately needed because the rhino had fallen on it’s side, and Dr Rogers wanted us to push her so her weight was distributed on all of her legs, just in case she got pins and needles and was scared when the tranquilliser wore off.

It’s bloody hard to push a rhino, let me tell you. All of these people and we couldn’t get her upright. 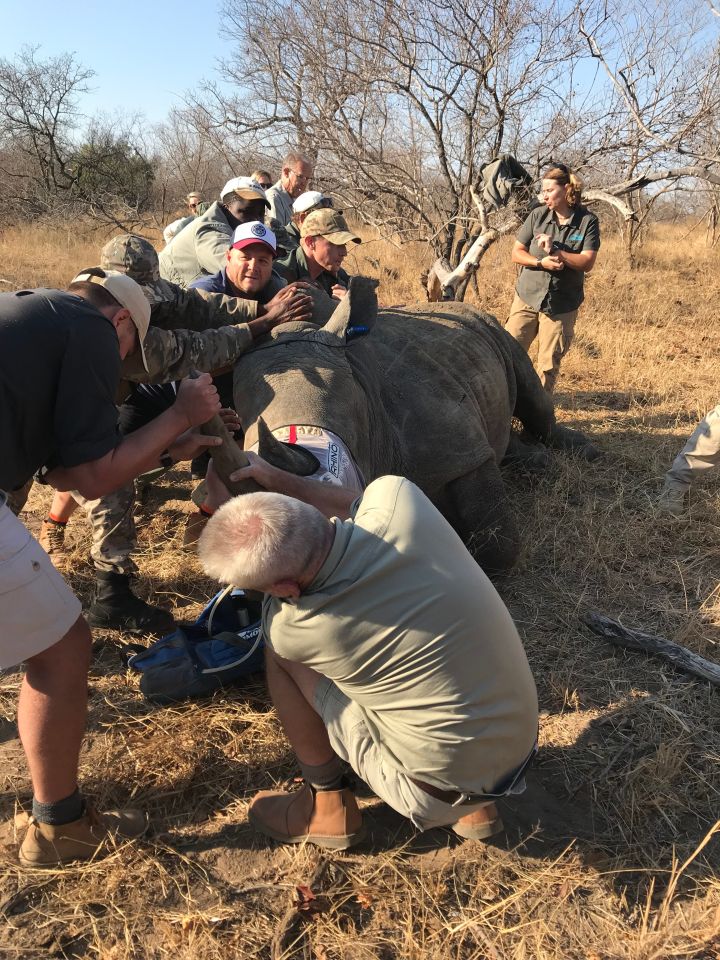 In the end we simply can’t move her, and because there’s a strict time limit on how long you can work on the rhino once they’re tranquillised, Dr Rogers decides we need to get going and hope she either doesn’t get pins and needles, or is okay if she wakes up with the weird sensation in her left legs.

First, I’m recruited to add some lubricant to the rhino’s eyes. They put a comfortable mask over the eyes so the rhino isn’t accosted with people’s faces during the whole process. As Dr Rogers explained, they do whatever they can to keep the animal calm in the process, because it is traumatic – albeit necessary.

It was an amazing experience being so close to such a large, wild animal. 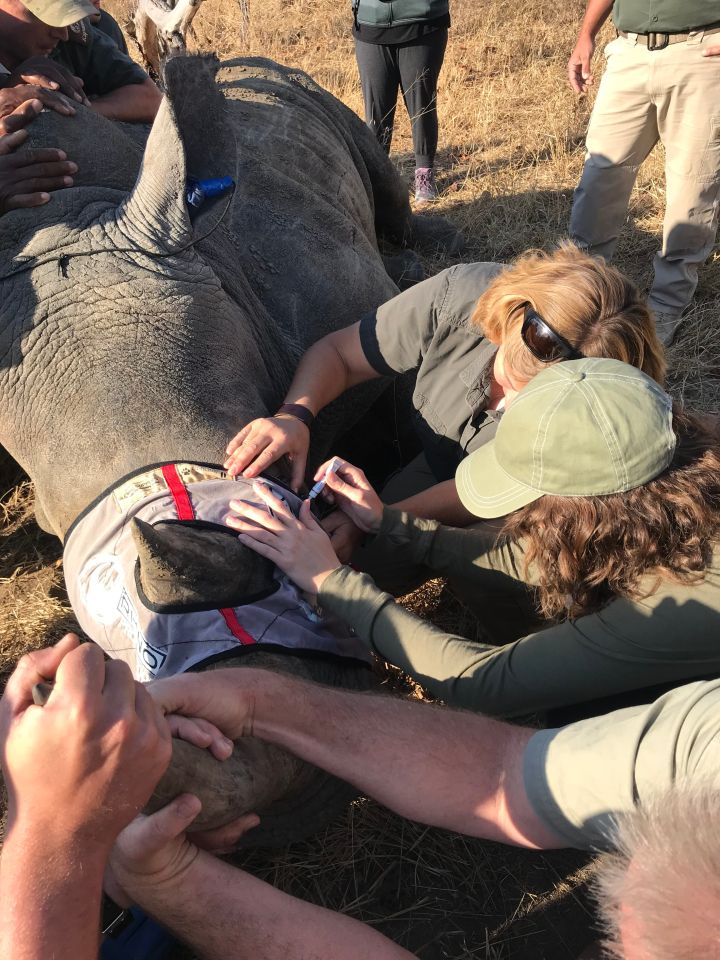 That’s me in the khaki hat. Don’t ask why I bought a khaki hat (I was trying to be all Safari Girl, ok). The woman guiding me was Janelle, Dr Rogers assistant and essentially his right hand – she was a boss bitch and a half, totally calm under pressure and smoothly working through most of the core work. Anyway, I was literally looking into her eyeball and trying to keep my hand from shaking as I squeezed protective gel in. I was putting too little and Janelle was like “it’s a rhino. She’s a big animal. Do the whole tube.” 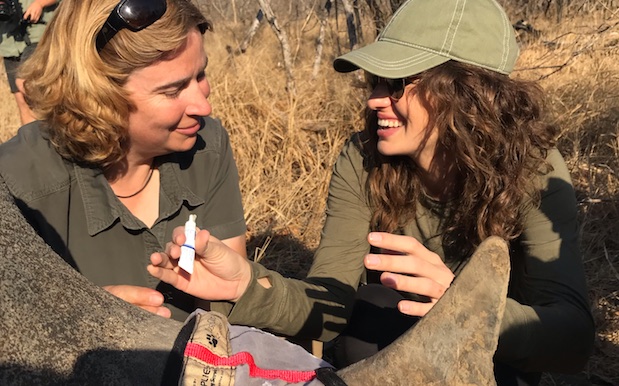 After the rhino’s eyes are lubricated and the anaesthesia is at work, the notch is made – the process is quick and methodical, if a bit gross. The chunk is sliced out of the rhinos ear, and blood spurts everywhere. But pressure via metal clamps is swiftly applied, and a paste added to the wound as an antiseptic and healing agent. It’s over very quickly, and the animal doesn’t react.

The chunk of ear is put in a plastic container for research purposes. Then, a microchip is inserted at the base of the ear, as well as inside the horn. This is part of the tracking process – now, the animal can be tracked in the park, but also if (god forbid) it’s poached, the horn itself can be tracked. This is so that in the worst case, there’s a chance the horn can be traced and the poachers caught.

It looks horrendous – the horn is drilled into so the microchip can be inserted, and then a small stick placed in the hole and glued in to keep the microchip in place. But rhino horns aren’t like, say, our fingers. They’re more like fingernail – they don’t have feeling in the horn, and as long as you’re not working on the base of it, the animal won’t feel anything. 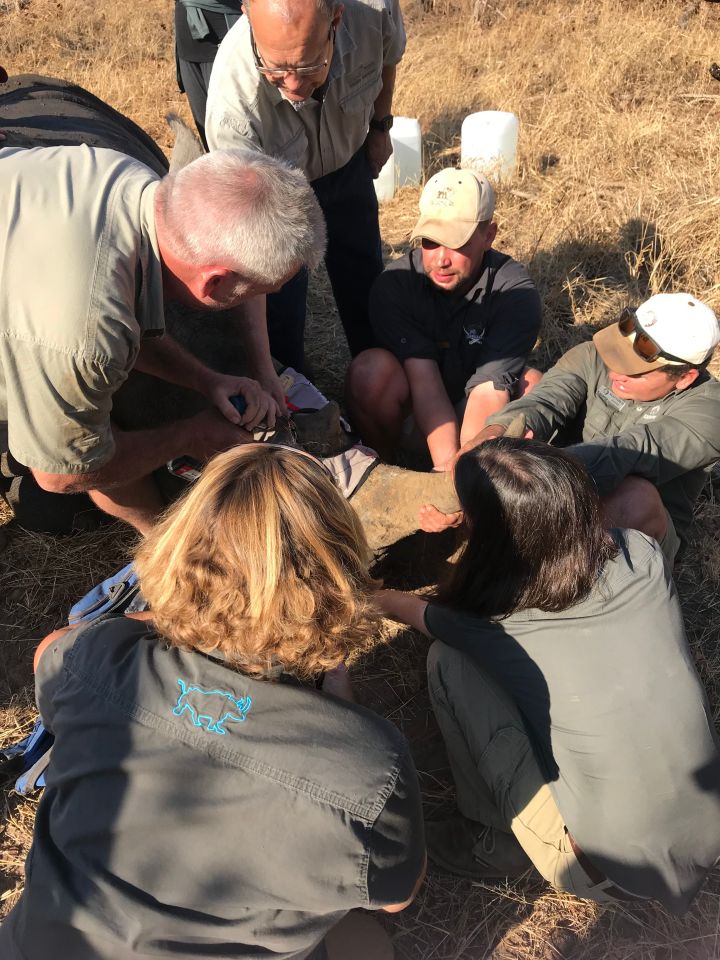 It’s all over within ten minutes – it’s wild how fast Dr Rogers, Janelle and the team work, and how smoothly they deal with unforeseen events like the rhino falling incorrectly, or nervous assistants like myself and the other journalists.

Dr Rogers asks everyone to quickly head back to the vehicles – once they take the blindfold off the rhino, it’s naturally a dangerous animal, especially because it’s likely to be disoriented. Our rhino (we called her Aussie, lol) is fine, though. She gets up, seems a bit slow, but walks straight. Dr Rogers monitors her for a while as the tranquilliser wears off, just to protect her from potential predators in her weakened state. Once she seems relatively back to normal, we take off.

It’s rare you can get that close to a wild animal, let alone have an opportunity to do something good for the conservation efforts of an endangered species. But something that really moved me was that a large, profitable reserve was working to protect rhinos and also allow them to live naturally with their horns.

Obviously it benefits Kapama Private Game Reserve, too – they want their rhinos alive for safari reasons. But in general, Kapama proved a commitment to seeing South Africa’s animal species protected and living naturally. They have their own trained anti-poaching unit working to protect animals within the reserve, and pride themselves on ensuring the reserve’s wildlife isn’t disturbed – for example, they don’t go off-road on safari save for a few tracking exceptions, human interaction is limited – there’s no standing in vehicles or making noises to get animal’s attention. They also don’t protect their animals from the natural order of nature – lions and panthers will kill when needed, and so on.

If you’re interested in being involved in rhino notching, you can contact Kapama Private Game Reserve here – it’s not listed on site and is expensive. Alternatively, you can check out their other conservation offerings here.

READ MORE
I Shit You Not, Aussie Scientists Just Won A Nobel Prize For Research On Cubed Wombat Poo