If you’ve ever wanted to join the mile-high club, you’ll probably be interested in the following stats, which detail where people fucked on planes, how long it lasted, and who it was with.

The data was collected by dating site, Saucy Dates, by surveying more than 11,000 passengers about all they weird sex stuff the did in the air. While the results showed that 78 per cent of travellers are keen on joining the mile-high club, only 5 per cent actually have.

Check out all the wild shit below. 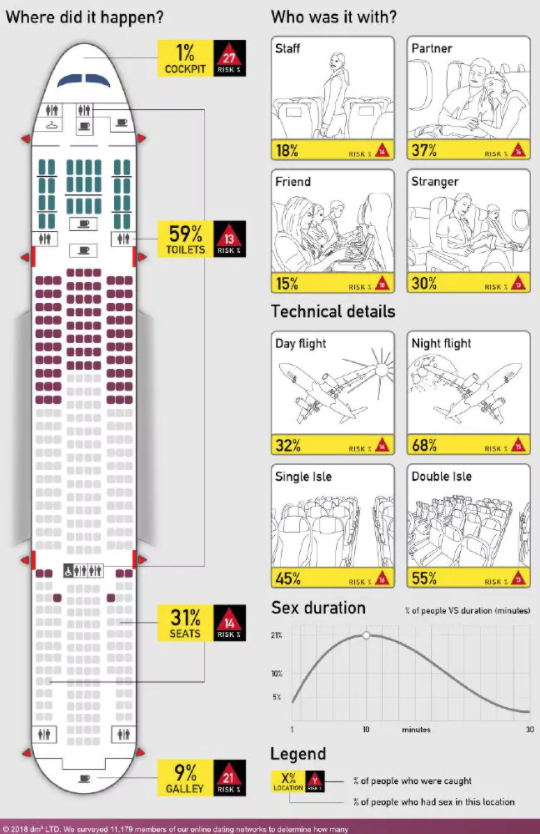 Wow, who’s fucking in the cockpit? I mean, it’s probably the pilots, sure, but damn. Not only is it the most appropriately named location on a plane for fucking, it’s also the riskiest, boasting a 27 per cent chance of being busted.

Predictably, most people (59%) just opt for the classic toilet scenario, but the next best option appears to be the bloody seats. Fucking hell, that’s pretty ballsy. I’m also surprised that it’s only 1 per cent risker than the loo.

In terms of who their smanging, most (37%) are doing the deed with their partner, while 30 per cent chose a stranger, 18 per cent successfully wooed a staff member, and 15 per cent sealed the deal with a friend.

“I overheard the stewardess talking to her friend, telling him that she hadn’t had any sex and she broke up with her boyfriend and it had been a long time,” said one bloke. “I hit on her for a while and she finally asked me if we wanted to go in the bathroom and have sex. She told me there was no time for foreplay.”

The average romp time was, surprisingly, around the 10 minute mark, which seems far less rushed than you’d expect for a plane fuck.