One of the defining traits of Donald Trump is that he is, more than the average person and certainly more than any other president, completely fixated on Twitter. It’s unsurprising why: his unfiltered Twitter feed played no small part in making him president. He takes to the platform with an uncompromising vigour, his brain slowly turning into a kind of slurry or porridge as an unending feed of demented content slams through his eyeballs at unstoppable velocity. He is the first truly 21st century president, double-screening tweets with the constant blare of Fox News in the background. For him it is heaven; for the rest of us an unending hell.

So when Trump met with Twitter CEO Jack Dorsey in the White House, it was clear that it was never going to be a serious discussion about the intersection of tech and public policy, but instead an opportunity for Trump to sound off on shit he doesn’t like on Twitter, like a sundowning grandpa getting his head around Microsoft Outlook.

Great meeting this afternoon at the @WhiteHouse with @Jack from @Twitter. Lots of subjects discussed regarding their platform, and the world of social media in general. Look forward to keeping an open dialogue! pic.twitter.com/QnZi579eFb

According to the Washington Post, the meeting was largely about Trump’s annoyance that he (and other conservatives) had been losing Twitter followers:

A significant portion of the meeting focused on Trump’s concerns that Twitter quietly, and deliberately, has limited or removed some of his followers, according to a person with direct knowledge of the conversation who requested anonymity because it was private. Trump said he had heard from fellow conservatives who had lost followers for unclear reasons as well.Tru

It’s entirely obvious from Jack’s expression in the above photo that the conspiracy to steal followers from conservatives is exactly what Trump is talking about at that moment: 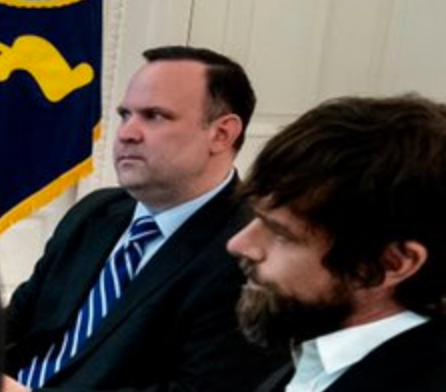 A statement from Twitter after the meeting insisted the meeting was actually about “protecting the health of the public conversation ahead of the 2020 U.S. elections and efforts underway to respond to the opioid crisis.”

There has long been a conspiracy theory in conservative and right-wing circles that Twitter subject them to a secret policy known as “shadow banning”, whereby the reach of their posts is artificially limited. Twitter has denied that they have any such policy. The company has in recent years made an aggressive attempt to purge bots and fake accounts from the platform, which conservatives also believe is a cover for a widespread ban on right-wing accounts. Trump has entertained and spread these conspiracy theories in the past, too.