Startup hype is a very real and powerful beast that can be both exhilarating and terrifying. As evidenced by yesterday’s Vanity Fair article, Elizabeth Holmes, founder and CEO of medical startup Theranos, has very likely experienced the full force of both.

You see, Theranos, founded in 2013, had come up with a revolutionary way to test blood without the need for intravenous needles, instead, extracting and testing blood from a pin prick to the finger. They are based in Silicone Valley and at the time of founding, Holmes was only 19-years-old and went on to be worth a staggering $4.5 billion, making her the world’s youngest self-made billionaire.

She was also a Stanford dropout and worshipped Steve Jobs, but in a creepy way. She dressed similarly (she did the whole turtleneck thing), practiced a similar diet and it would surprise any of us if she had a Jobs shrine in her office where she sacrificed expensive electronics in return for vast riches and business acumen.

What we’re getting at here, is that the entire “narrative” behind the company made it the perfect PR machine. The entire package sounded so good that even without knowing the ins and outs of how the test actually worked, it played right into the venture capitalist circle jerk that is the Silicone Valley.

The testing device, dubbed the Edison, was a real hit, allowing Theranos to raise over $400 million from investors by 2014.

Needle haters cheered and investors continued to line up for a piece of the delicious pie. Everything was beaut, except for one small thing…

The testing method didn’t work. It was all a bloody SHAM!

According to a number of third party specialists, including the US Department of Defence, the tests were far too inaccurate to use. And if you ever want accuracy, this is likely the time.

“Regulators from the Centers for Medicare and
Medicaid Services, which regulates laboratories, visited the labs and found
major inaccuracies in the testing being done on patients. (The Newark lab was
run by an employee who was criticized for insufficient laboratory experience.)
C.M.S. also soon discovered that some of the tests Theranos was performing were
so inaccurate that they could leave patients at risk of internal bleeding, or
of stroke among those prone to blood clots. The agency found that Theranos
appeared to ignore erratic results from its own quality-control checks during a
six-month period last year and supplied 81 patients with questionable test
results.”

Even her Stanford professor, Phyllis Gardner, called bullshit when Holmes pitched the idea to her.

“I told her, I don’t think your idea is going to work,” she said. Lel.

I guess it’s hard to be surprised when these are the kinds of answers Holmes was giving when asked how the technology works:

“A chemistry is performed so that a chemical reaction occurs and generates a signal from the chemical interaction with the sample, which is translated into a result, which is then reviewed by certified laboratory personnel.”

If I was about to throw millions of dollars at a company that’s claiming to change the world, I’d want a better explanation than that bumbling nightmare.

She was interviewed by CNBC‘s Jim Cramer shortly after the publishing of The Wall Street Journal article that outed Holmes as a huge bloody con artist and offered this response when simply asked, ‘what happened?’

“This is what happens when you work to change things,

First they think you’re crazy, then they fight you, and then, all of a sudden, you change the world.”

I think we all know what’s going on here. The ghost of Steve Jobs is clearly using this woman as a vessel to grief the entire world. Kudos, ghost Steve.

As John Carrryrou of The Wall Street Journal said, “It’s O.K. if you’ve got a smartphone app or a social network, and you go live with it before it’s ready; people aren’t going to die. But with medicine, it’s different.”

Seriously though, if you’re going to pour the majority of your efforts into marketing and PR strategies, you probs wanna make sure the product you’re spruiking actually works. What the fuck was she planning to do? Wait, don’t answer that. I think we all know… 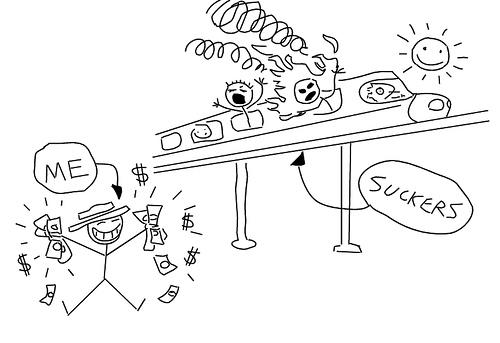 Welp, not anymore! The Food and Drug Administration banned the company from using the Edison testing device and the Centres for Medicare and Medicaid Services have banned Holmes from running a medical lab for two years. It’s for the best, really.

The FBI are also investigating exactly what Holmes knew and when she knew it to establish a timeline. If it falls into place the way we think it will, she could be facing some hefty fraud charges.

Wouldn’t wanna be ya, Holmesy!