The Sims 4’s newest expansion pack, Star Wars: Journey To Batuu, was announced to mixed reactions from the community. But as it turns out, it actually slaps.

I have to admit, at first I had some pretty mixed feelings about a Star Wars game pack. I’ve seen all of the movies and I enjoy them, but I’m also not exactly a diehard fan. But as a diehard fan of the game, I jumped at the chance to get my hands on the game a few days early (obviously). 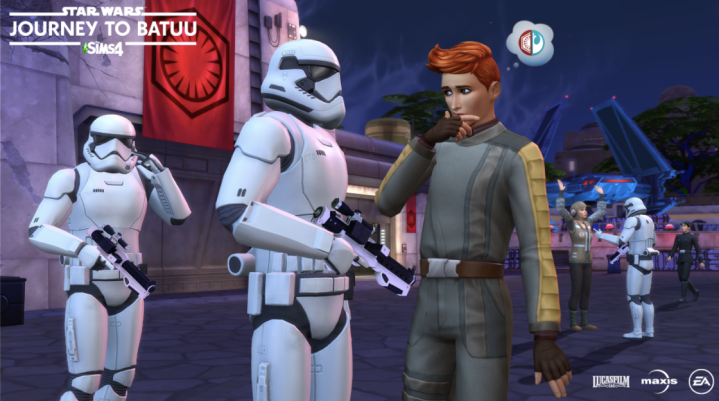 A major qualm I had with this game pack at first was the idea of them just chucking Star Wars into the world. I’m sorry but I just didn’t vibe with the idea of seeing a Wookiee stroll down the street while I’m watering my garden. But as it turns out, Batuu is a vacation destination in-game, so it doesn’t actually mess up your usual life (but you *can* add bits of the world to your IRL life).

Basically, it’s the best kind of vacation because it’s free and there’s no time-frame allocated, so you can literally just yeet off to space for as long as you want (the dream, IMO).

When you get to Batuu it’s a total game changer. You leave all of your simoleons and inventory at the gate, change into your Star Wars-themed outfit and prepare for a totally immersive experience.

This is the closest you’re going to get to Disney’s Galaxy’s Edge theme park for a while, so you’re probably going to want to get your headphones and really ~immerse~ yourself.

Whether or not you’re a fan of the Star Wars franchise, you can’t deny how absolutely incredible the visuals are in this game. You could honestly stroll around the three zones of Batuu for hours just looking at how impressive it is. It reminds me of when you’re walking around a theme park and it just sorta feels like a whole different world. ICONIC.

The attention to detail is just impeccable. You don’t even really feel like you’re in the movie, rather, you’re just a part of the world, which is a huge win if you’re not a diehard Star Wars fan.

You could honestly spend hours just sitting in the Cantina sinking space beers and watching the world pass you by.

But when you’re done simply admiring the world, there’s also a tonne of in-game quests to complete that add a different experience to the game if you’re used to just building cool houses and WooHooing in dumpsters.

You can work to improve your reputation with each of the factions by completing tasks that truly make you feel like you’re joining the First Order or Resistance. I truly didn’t realise how badly I wanted to walk around Batuu spreading First Order propaganda and arresting people, but here we are.

As your reputation improves, you can unlock new outfits and abilities that improve the gameplay. You know, because everyone *kinda* wants to dress up as a stormtrooper, right?

I started out trying to join the First Order (on account of the fact that I am a chaotic bitch), but even once I’ve won their trust, there’s still two other storylines to follow to keep me distracted from how god-awful 2020 has been so far.

I managed to squeeze in a decent amount of gameplay over my weekend but there’s still so much more I haven’t even been able to try yet. I mean, lightsaber battles sound like my new form of therapy.

Despite the backlash it has received, I honestly think the pack has come at the perfect time. Sure, it may have a novelty factor that wears off after a few months, but when you can’t leave the house and you’ve already built your dream home 47 times, it adds a new element and some fun quests that are guaranteed to keep you occupied *hopefully* until we’re allowed to, you know, leave the house again.

The Sims 4 Star Wars: Journey To Batuu is the immersive experience I needed to distract myself from the world right now. If you’re not keen to jump into something like World Of Warcraft or The Elder Scrolls but also don’t want to remember that the real world exists, this is the perfect solution. You get all of the fun, out-of-this-world experience while keeping the best bits of The Sims.

The Sims 4 Star Wars: Journey To Batuu is out September 8. You can purchase it here.