In a bloody beautiful example of satire done right, EpiPen Tycoon lets you assume the role of Mylan CEO, Heather Bresch, who made headlines recently for bumping up the cost of lifesaving anaphylactic medication by 400-fucking-percent. Poor form, Heather.

Much in the same vein as pharmaceutical ultra-weasel Martin Shkreli and his critical AIDS medication price bump of over 5,000 percent, Bresch raised the price of the EpiPen from $US57 to $US600 over the course of about 9 years.

As you’d expect, pharmaceutical company Mylan has copped a truckload of shit since the hike was called out by US Senator Chuck Grassley and as a result, Bresch has been at the forefront of the outrage.

In an attempt to lubricate the situation, she announced a generic version of the EpiPen for the still ball-breaking amount of $US300. The drug costs $US1 to make.

In EpiPen Tycoon, the objective is simple: raise your salary to $25,000,000 by increasing the price of the drug and simultaneously dispelling the resulting public outrage. 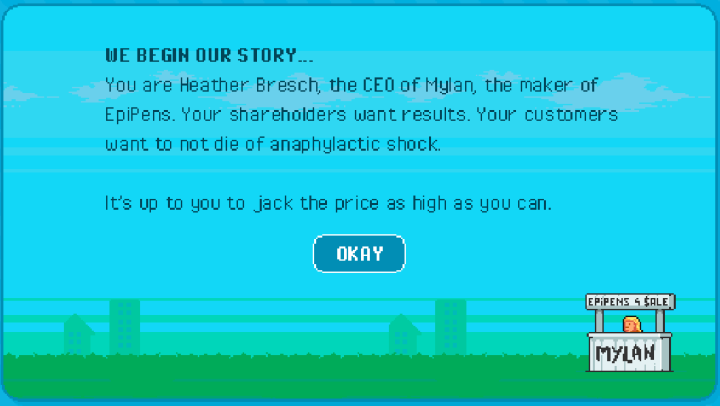 Bump the cost up or down by $5 increments and when you can, use the bonus items available to allay public concerns. These include “Call Your Dad (Senator)”, “Offer Generic Version” and “Blame Obamacare“.

It’s pretty heavy, customers show up with a symbol of a bee or peanut above their heads and if they can’t afford the medication, they die. 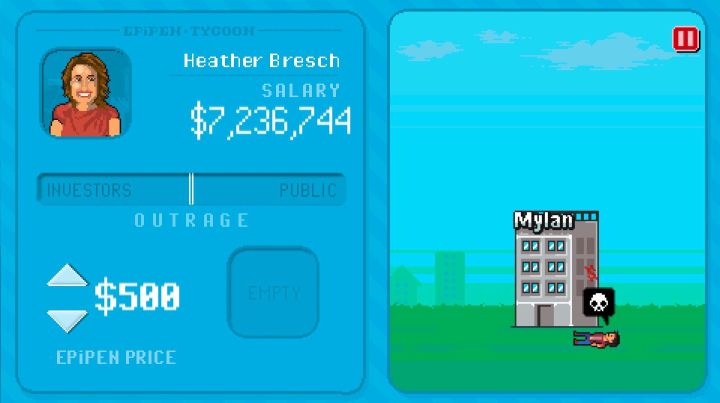 At certain intervals, you might even get a message like “A celebrity is tweetstorming about how bad you are!” to which you will need to act accordingly. It’s a delicate balancing act that casts a grim light on the industry and its villainous ways.

When you win the game, Bresch uses a golden parachute to escape to her private jet and Martin Shkreli takes over Mylan as CEO. It’s exactly like playing real life!