Survival games seem to be all the rage at the moment, whether it’s in the form of explosively popular battle royale modes or slower experiences like, say, Subnautica or Raft. But what if you took the genre and turned everything about it up to eleven? Well, you’d probably get something like Devolver‘s SCUM.

The premise is fairly straightforward: the world is hungry for fucked up entertainment, so it throws 64 prisoners onto an island filled with zombies and films them tearing each other apart. Playing as one of these prisoners, your goal is to survive long enough to remove the monitor stuck to the back of your head and escape the island. Essentially, it’s like a cross between DayZ and PUBG.

Before you jump into the huge 144km-squared world, you can customise your character in various ways, like changing body type and various skills. Making yourself muscular will obviously make you stronger, but will give you fewer points to assign to skills in intelligence, for example. What you choose will come down to how you wanna play; would you like to be able to run long distances or belt enemies with one punch? It’s totally up to you.

Right from the get-go, SCUM lets you monitor absolutely everything you can think of about simply being alive. Are you hydrated enough? Are you too cold? Do you need to take a shit? Have you got enough vitamin B-fucking-12? Yes, it gets that deep. 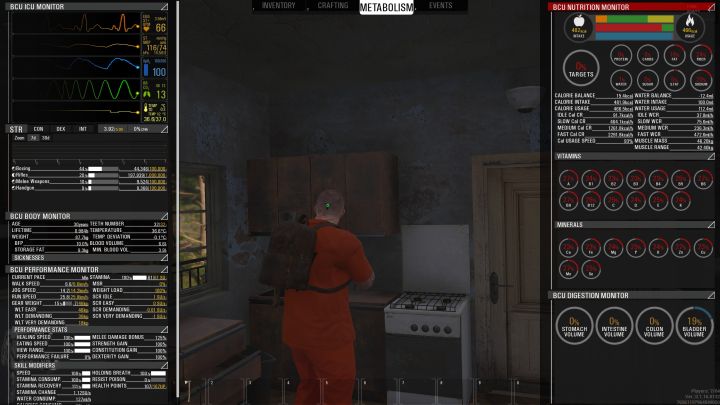 Every aspect of your metabolism is visible on one intimidating tab that looks more overwhelming than it actually is. While the penalties for being devoid of a balanced diet can translate into consequences like shorter stamina, it’s not all that difficult to find the right foods in the world once you know where to look. Anything urgent, like hunger or thirst, for example, will be displayed as an alert, so you don’t need to stare at all that information constantly. You can even choose to ignore most of your levels if you like, but hardcore players can use them to level up their performance.

However, there might be times where you’re forced to pay attention to your stats. For example, if you lose all of your teeth, you’ll need to find a way to turn your food into mush in order to eat it and every now and then, just like real life, you’ll need to take time out from your day to drop a huge borry. If you choose to ignore the alert for long enough, old mate will go right ahead and just do it, which is not ideal in certain situations. Choosing where to shit or piss is important, too, as other players will be able to see where you’ve been and can track you using the evidence.

Unlike some others in the genre, the items you find tend to make more sense in the context of where you found them. You’re far more likely to find guns in a police station or military base rather than the bedside table of a random house, which makes it much easier to pick and choose the buildings to search based on what you need rather than wasting time going through absolutely everything. Venturing into military zones, like the airfield, can be a risky venture and requires a certain level of sneakiness, as they are often patrolled by giant walking robots and if they spot you, they’ll shoot you to bits. Because SCUM reaches for realism, one or two shots is all it really needs to kill you.

Weapons are scarce and are often found with no ammunition or even a clip to load them with. If you are lucky enough to find some bullets that are compatible with the weapon you’re carrying, chances are you won’t have a clip to put them in, which can be pretty fucking frustrating. But because we’re dealing with an immensely detailed world, you can choose to chamber a single bullet for emergencies.

If you die, everything you were carrying will stay with your body and you’re given a couple of options for respawning, all of which cost in-game currency called Fame Points. A random respawn anywhere on the map will cost you a fairly low amount, while choosing a safehouse or area closer to your corpse will cost you more. Fame Points are accumulated by doing things within the world, like simply moving around, killing other players or even just zombies, but the longer you survive, the harder it will be to accumulate them. According to a developer post on Steam, the requirements for earning Fame Points will grow exponentially.

All of these different features and mechanisms on their own can be tedious, but it’s when you encounter an unholy clusterfuck of situations that they’re most enjoyable. Nothing gets the adrenaline pumping quite like trying to get away from a couple of zombies you accidentally got a little to close to while also trying to eat because your stamina is getting fucked over by your malnutrition. I won’t lie, there are some long periods where you’ll be mindlessly looking around for loot or simply jogging across the map where you’ll ask yourself if you’re actually having fun. The most entertaining parts, at least to me, are the ‘I can’t believe they actually programmed that’ moments, like being so desperate for food that I had to eat random mushrooms which made me vomit like a psycho, or the random bouts of diarrhoea I was powerless to stop. 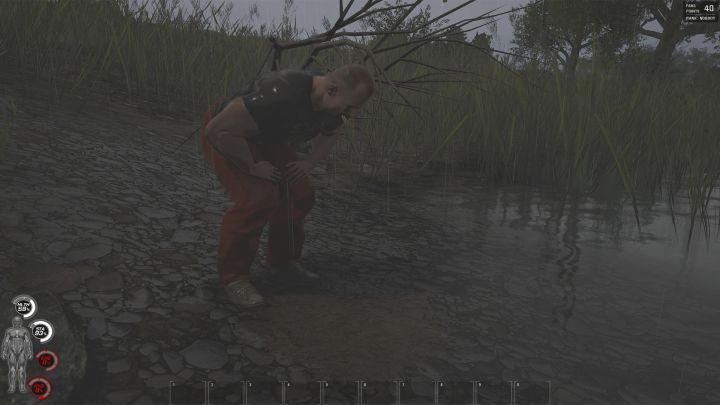 There are also events you can take join in exchange for Fame Points, like team deathmatches, cargo assaults, and more. If you win, you’ll get – you guessed it – more Fame Points.

SCUM is definitely not for everyone. If the thought of spending a few hours looting only to have some asshole pick you off from a random bush and steal your gear sounds frustrating to you, I don’t think you’ll enjoy this. But if you’re into hardcore survival games, bodily functions, and huge open worlds, you should certainly give it a whirl.

SCUM is out on Steam‘s early access platform on August 30.