I’ve always found virtual reality to be a fascinating concept, and when it first became available to consumers, I was one of the first to pounce on it. But while it felt like a new era of entertainment in some ways, it’s been slow to progress beyond the level of a glorified tech demo. The Oculus Quest isn’t a massive leap in this regard, but it does feel like the next true iteration of consumer VR.

Unlike the Oculus Rift or HTC Vive, the Quest doesn’t require a beefy PC to run, which means no external sensors or cables, and that’s far more freeing than it seems. One of the biggest hurdles I had with the Rift was setting it up every time I wanted to use it and ultimately, this lead me to sell the thing as I simply wasn’t using it enough. I know that sounds like a petty grievance to have, but having to plug in a number of cables, calibrate the headset, and so on, eventually became too much of a pain in the ass for half an hour or so of use.

The Oculus Quest does away with this barrier completely, allowing you to pick it up, chuck it on, and jump straight into a game or experience. Of course, you’ll need to run through an initial setup, but even that is a piece of piss. After downloading the oculus mobile app and punching in a few details like Wi-Fi settings, for example, you complete the rest of the setup in the headset itself.

Lastly, you’re asked to create a Guardian zone, which is essentially a guide to stop you running into walls or smashing your controls into your TV. A black and white feed of the world around you is displayed via the headset’s external cameras, allowing you to use one of the controllers to draw your safe play area. This area will then appear as a grid in your headset but only when you get close to it, giving you a decent sense of your real-world surroundings without breaking the experience you’re in It kicks ass.

Being a completely standalone unit, the Quest has, roughly, the processing power of a high-end smartphone, which will somewhat limit its capabilities compared to premium PC VR. To be honest, I don’t feel like it’s that limited at all, particularly on the gaming side of things, but it does mean that larger, more involved games may not make it to the platform, or will be scaled down to work.

The Oculus Quest comes in two different sizes – 64GB and 128GB – starting at $649 here in Australia. When you consider that a high-end VR setup will set you back around $2,000 just for a PC capable of running it, it’s a pretty good deal. Along with the headset, the box also includes a charging cable and two touch controllers. 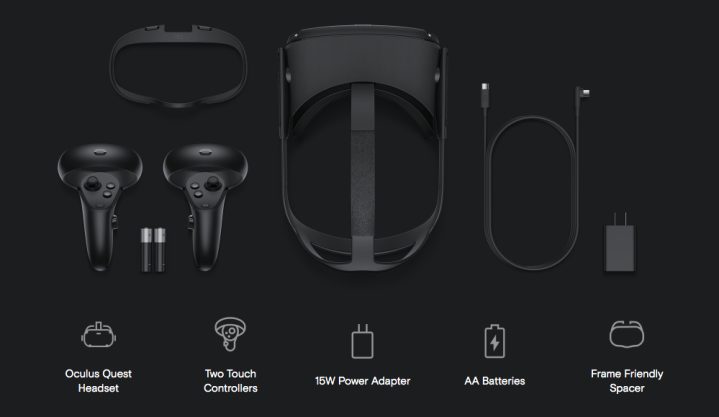 My only gripe with the Quest is that you can’t charge it while it’s in use. The battery drain while playing games, for example, is greater than the charge going in and as soon as it hits zero, it shuts off. I was hoping that having the headset plugged in would maybe bypass the battery, allowing use beyond the life of the battery itself, but no dice. This isn’t a huge deal, just a little annoyance that’s easily remedied by simply plugging the headset in after use.

The battery lasts for about 2 hours when gaming and a little more if you’re just watching movies or doing lighter activities.

At launch, around 50 games will be available for the Oculus Quest, and there are some decent titles on there. I had a great time playing through Beat Saber, Superhot VR, Creed: Rise to Glory, Space Pirate Trainer, and more.

For those used to high-end VR gaming, this might not be the product you’re after, but if the idea of ditching the wires and sensors is appealing to you, I can’t recommend the Oculus Quest enough. If you’re new and keen on diving into the world of VR, this is the absolute perfect unit to get you started.

The Quest launches on May 21.