If you’re in the market for a new telly, great news: Netflix has recommended this year’s best units for bingeing the absolute piss out of the streaming service.

The company makes its recommendations yearly, marking each potential TV on criteria like startup and app launch speed, ease of app access or a Netflix button on the remote, high resolution interfaces, and the ability to resume what you were doing before you last switch it off. If they meet at least 5 out of 7 of these, as well as the standard price and picture quality criteria, they get Netflix’s seal of approval. 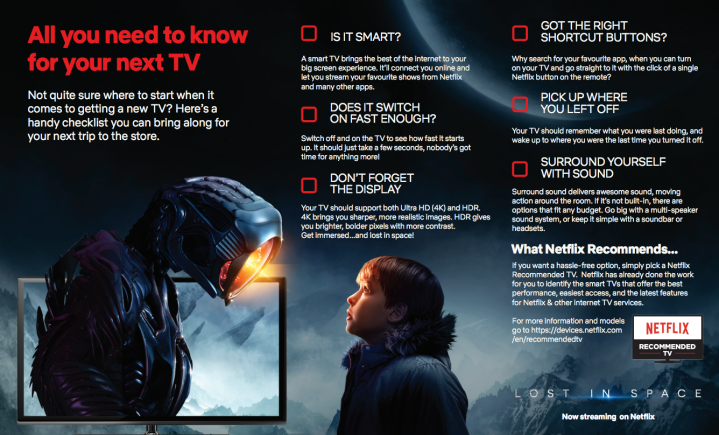 A 49-inch version of the LG TV is selling around the $1,500 mark, and Sony’s price point is about the same for a similar size. Not exactly cheap, but hey, you’re paying for quality and if you’re gonna listen to anyone’s opinion, Netflix’s is definitely up there. I’d wager you blow at least 5 to 10 hours a week on the streaming service, so there you go.

So hey, if you need a new TV to spend your entire weekend sitting in front of, you know which ones to choose from.