Apple announced a whole bunch of new stuff during its big keynote on Wednesday morning, including the new iPhone 11 and iPhone 11 Pro. I was lucky enough to be there and experience it first-hand and yep, it’s every bit as wild as it looks.

For the past few years, I got up at 3 am to cover the event from my bed and always marvelled at the spectacle of it all, particularly when the company started holding the keynotes in its very own Steve Jobs Theatre. While I was super excited to not have to wake up at 3 am this year, I was even more excited to experience what looks like such crazy energy in the flesh.

When the day arrived, we were ferried from a hotel in San Jose to Apple Park in Cupertino, an incredibly lush campus absolutely brimming with bushland and glass-walled buildings, the largest being Apple’s great big doughnut-shaped HQ. I wasn’t allowed inside it, as much as I begged them to let me run a lap of its circumference, but I was told that it contains the largest amount of curved glass in the world, which is pretty dang impressive.

Where I was allowed, however, was Steve Jobs Theatre, an underground amphitheatre and showroom custom-built for Apple’s extravagant reveals and showcases. At ground level, it’s a big circular structure which is mostly – you guessed it – curved glass. 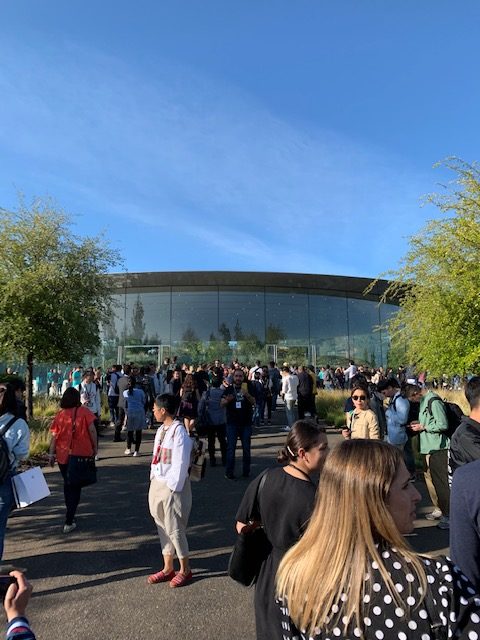 There were a ton of journalists and content creators from all over the world milling around, waiting to enter the theatre. We got to have some delicious snacks and drinks while we waited with soft, calming electronic music playing in the background. They get extra points for playing a Floating Points song I’m really fucking digging at the moment. Have they been looking through my patented Brain Massage playlist on Spotify?

If I had to describe the vibe of the place, I would call it Apple Store on steroids. It’s clean, completely minimalist, and oddly calming to the extreme. I don’t know if I’ve ever seen so much marble and glass in my life, but seeing it on such a grand scale is unreal.

While you’d almost expect one of the biggest tech companies in the world to be a dense concrete-laden workhouse, Apple Park is actually sprawling and covered in native bushland. The land was totally restored with hundreds of different varieties of native trees. Walking from the visitors’ centre to the theatre multiple times was actually one of my favourite parts of the two days I spent there. 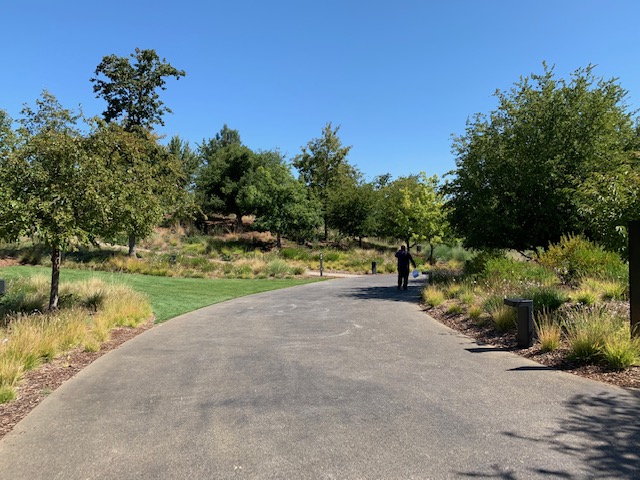 Amazingly, the campus also runs entirely on renewable energy, thanks to the enormous icing of solar panels on top of the Apple doughnut. A tasty technological treat for the environment. Yum yum.

The HQ itself is actually the world’s largest naturally ventilated building and is projected to need no heating or air conditioning for nine months of the year, which is insane, to me.

After a little while, we were allowed to start filing into the theatre, which was down a decent set of stairs I’m obsessed with. They’re just so fucking… big? I don’t know, I just really vibe them. It’s like walking into a spaceship. 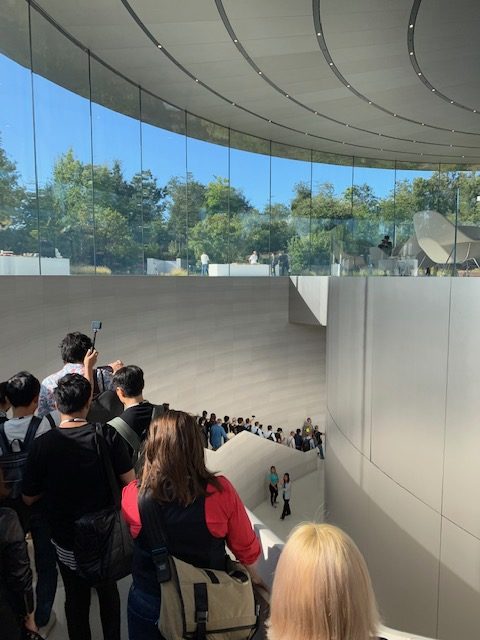 At the bottom, we continued on into the theatre, which is honestly smaller than it seems on the keynote streams, but certainly packs in a lot of people. It’s comfortable as hell, too, with leather seats and optimal viewing from pretty much any spot, at least from what I could tell. 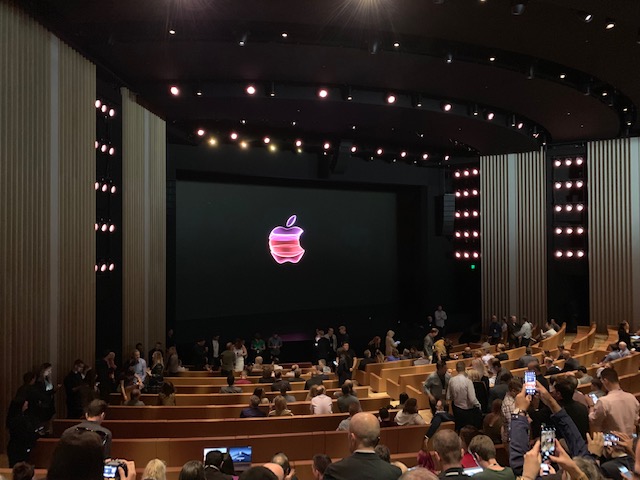 It doesn’t seem like it in that picture, but honestly, there were a lot of people in the theatre. 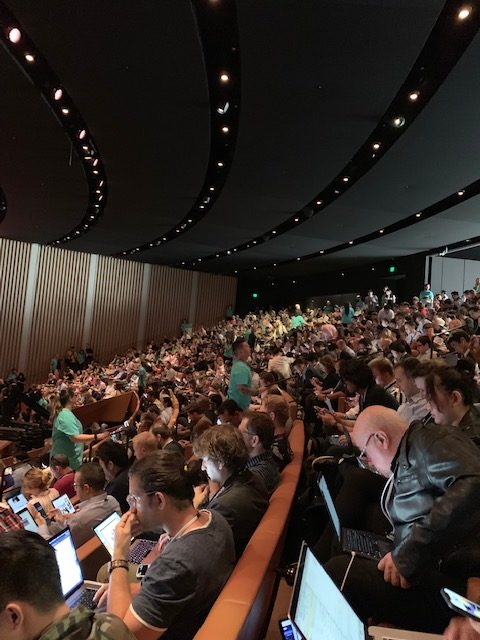 The keynote itself is pretty much what you see on the streams, although it is pretty exciting in person, even if I was frantically tweeting, writing, and sending pictures back to the team at home all at once.

After that, we got to head back into the pre-theatre area to get our hands on the products Apple had just announced. As you’d imagine, it was pretty busy, given there were hundreds of journalists from all over the world trying to get their mitts on one of the hottest tech products in the world. 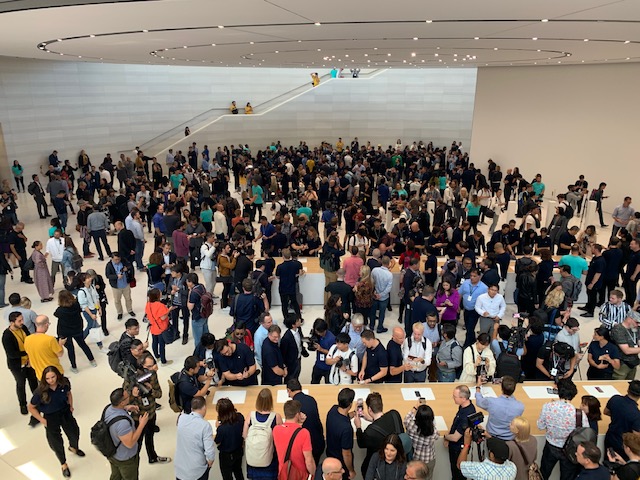 After waiting patiently, I eventually got my own grubby hands on the iPhone 11 Pro Max, a hefty beast with some incredibly beady eyes. Look at this thing. 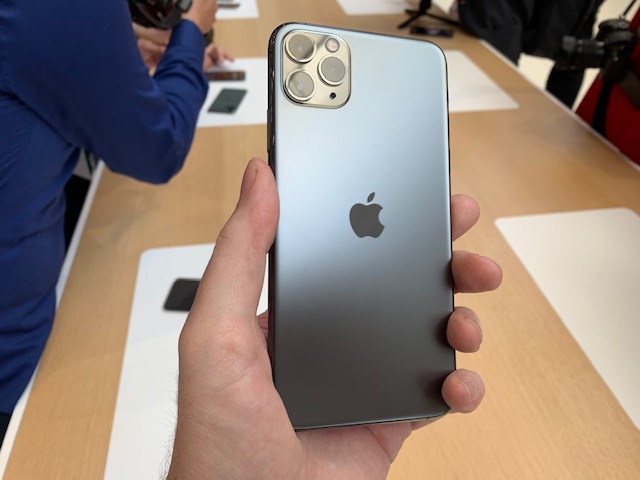 After all of the fuss died down, we got some lunch and I headed back to the hotel to furiously write as much as I could until my stomach begged me to leave for dinner.

The next day I got to head back to Apple Park for a couple of briefings. One of the best parts of this was having some parts of the Steve Jobs Theatre almost entirely to myself, which was a completely different, serene experience compared to the previous day. 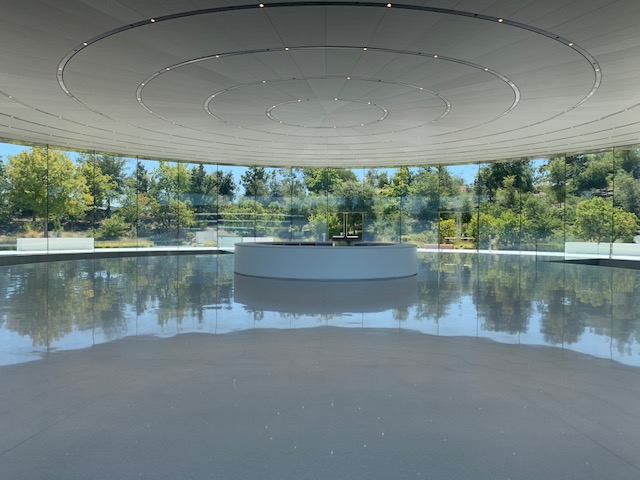 I was even allowed to take a picture in the same place I had demoed all of the new tech, which kind of makes it look like I was sucked inside of a Mac Pro. Unreal. 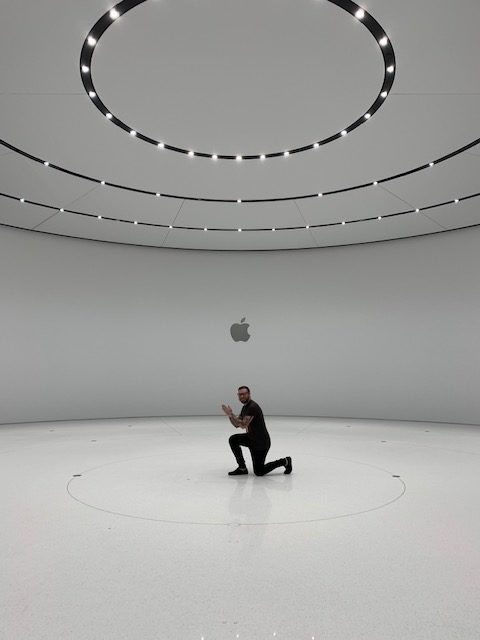 Covering one of the biggest tech events in the world has been at the top of my professional to-do list for a little while now and I’m stoked I got to cross it off in 2019. As an unashamed, enormous nerd, it’s an experience I’ll remember forever.