GIT FARKED: Warney Is The Star Of A VR Cricket Game Called ‘King Of Spin’

ATTENTION FANS OF CRICKET AND LOOSE BLOKES. SHANE WARNE IS THE STAR OF A FRICKEN VIRTUAL REALITY CRICKET GAME CALLED KING OF SPIN AND WE WANNA PLAY IT.

A cricket batting experience in virtual reality (VR) makes a lot of sense when you think about. You’re mostly confined to one spot, motion controllers become your bat and you get an incredibly immersive sledging experience.

Well, we can’t really comment on the sledging, as none of us have played the game yet, but you would hope some classic Warney bangers make the cut.

According to the game’s Steam page, “Shane Warne King of Spin is a fun, pick up and play batting game for the HTC Vive where you can have a quick hit with your friends, or even simulate a full team in a one-day match innings, facing 50 overs at various difficulty from Shane Warne!”

The game requires a HTC Vive and is not currently available on Oculus Rift, what with the lack of motion controls and all. It’s not specified whether the game will become available for Oculus when their Touch controllers are released later this year, but as a proud Oculus owner, I sure as heck hope so.

The game was given an Early Access release via Steam on September 6th and has since amassed 4 whole user reviews, 2 of which are rather scathing.

“Warnie spends more time talking than bowling, and it can’t be skipped. It takes almost as long between deliveries as in a real game of cricket. There appears to be no in-game menu, you can’t cancel a game if you’re not happy with the settings, you have to ride it out until the specified number of overs has been completed.”

However, user Rapidhearts says the game is beaut.

“AWESOME!!!! The emersion [SIC] is fantastic! I actually feel like i am there! Granted the only bowler you face is the Mighty Shane Warne himself but WOW! I love this game and look forward to future content.”

As the game is still likely in development, here’s hoping they iron out any glaring bugs and add some other cool features.

Our most wanted feature? When you hit a 6, Warney says “git farked!” pulls a full durry in one hit and inhales an entire schooner before exhaling a monumental cloud of smoke. Or as Warney calls it, ‘breathing’. 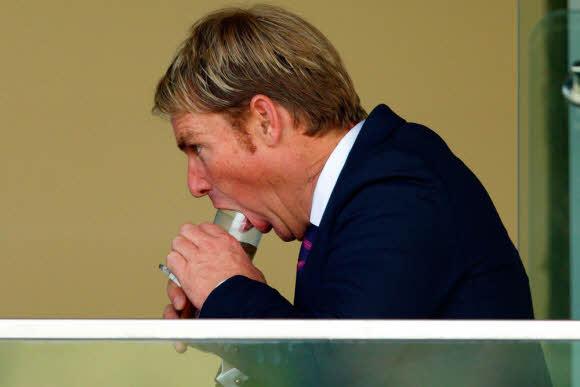