If you could find out when you’re gonna cark it, would ya wanna know? I’d argue that part of life’s exhilaration is not knowing, then using that gap in knowledge to justify you’re excessive drinking. It’s the very essence of YOLO-ing.

Exact dates and causes aside, would you instead like to know the odds of when and how you might die? Of course you do, everyone loves a good ballpark approximation of morbid shit. Using everyones favourite pastime – hot statistical analysis – Flowingdata.com created a calculator that utilises data from the Underlying Cause of Death database to estimate how and when you might depart this mortal coil based on deaths between 1999 and 2014.

The database is maintained by the Centres for Disease Control and Prevention in the US, so it’s not entirely indicative of how you young Aussie legends will die, but it’s probably pretty close. Enter your sex, race and age and the counter will start ticking your age forward, giving you a percentage chance of death per year. Each dot on the tool represents one of your simulated lives and will change from grey to a colour that represents the cause of death for that life. Grim. You can give it a whirl here.

According to mine, the tables start to weigh in deaths favour when I get over 75 and will be due to circulatory issues of some kind. Of course, it doesn’t take into account things like smoker status or your level of enthusiasm for froths and hard drugs, which would definitely give you a more accurate indication of your own impending death.

I played around with age and race to see if there were any huge disparities, but most seemed to end up around the same place. Asian Americans got the best result, making it to around 86 years before death was slightly more likely than life. Again, circulatory issues got the better of them. 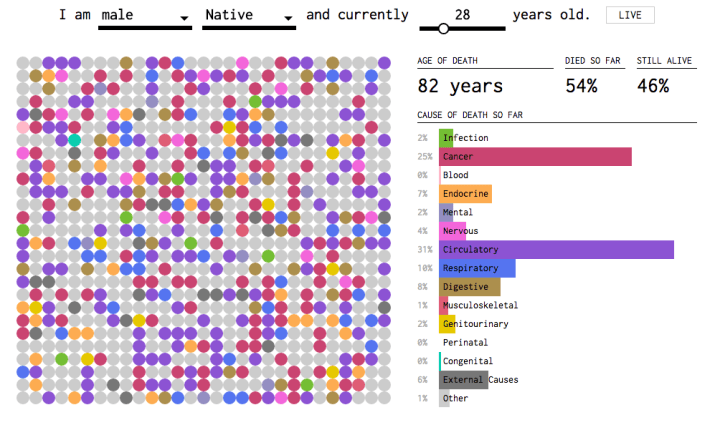 If there’s a moral to this story – do good things for ya circulation.