All The New Stuff In Far Cry 6, Including An Adorable Dachshund Companion With A Tiny Wheelchair

PEDESTRIAN.TV has partnered with Ubisoft and Xbox to prepare you for a helluva good time in Far Cry 6.

There are a few things you can always count on when it comes to the Far Cry series. Interesting, often exotic locations to fang around in, an array of powerful weaponry and most importantly — villains that will make the hair on the back of your neck stand up.

If you ask me, the series really found its feet with Far Cry 3, introducing the terrifying villain Vaas (played brilliantly by Better Call Saul‘s Michael Mando) and a fun outpost system where you effectively capture enemy hideouts in any way you see fit in between your standard missions and side quests. Each subsequent game maintains a version of this formula, but adds to it, keeping each iteration feeling fresh, yet familiar.

In Far Cry 6, you play in the fictional Caribbean country of Yara, run by a brutal dictator named Antón Castillo, played by Breaking Bad and The Mandalorian actor Giancarlo Esposito. Stepping into the shoes of Dani Rojas — who you can choose to play as a male or female character — you join a group of resistance fighters known as the Libertad.

I was lucky enough to take the game for a spin recently and was stoked on the familiar elements that make the Far Cry series great, as well as delighted to see some new features in the mix. So lock and load, mates, here are five things you should know before joining the resistance when Far Cry 6 launches on October 7 on Xbox.

Companions in a Far Cry game are nothing new at this stage — we’ve been fighting alongside sneaky dogs and trigger-happy nutjobs for a little while now. But for the first time, all of these companions will be animals.

One such companion is a friendly crocodile named Guapo. Well… he’s friendly to you, not so much to anyone slinging lead your way. In other words, you can set Guapo loose on your enemies and he’ll go absolutely ham on them. I should also mention that Guapo wears a shirt. Do with that information what you will. 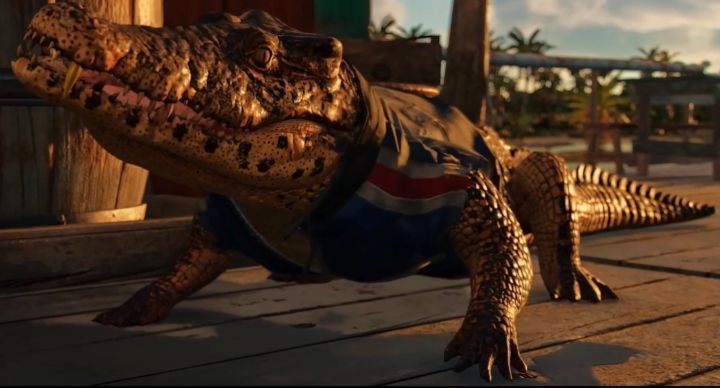 On the slightly cuter side of the spectrum, you’ll also have Chorizo, a tiny Dachshund in a tiny little wheelchair. Unlike Guapo, Chorizo is purely a way to distract your enemies, which always comes in handy when you’re trying to be a stealthy Steven when capturing an enemy checkpoint.

Yara will feature a number of locations where you can holster your weapon to blend in, lest you wanna be turned into mincemeat by hoards of enemy soldiers. In previous Far Cry games, just entering the vision of an enemy with a gun in hand is enough to piss them off, so this feature allows you to explore Yara without having to dodge angry jerks at every turn.

This will also come into play during various missions, but I won’t give away too much information here.

Hell yeah, you can ride horses to get around now, baby! Need I say more? 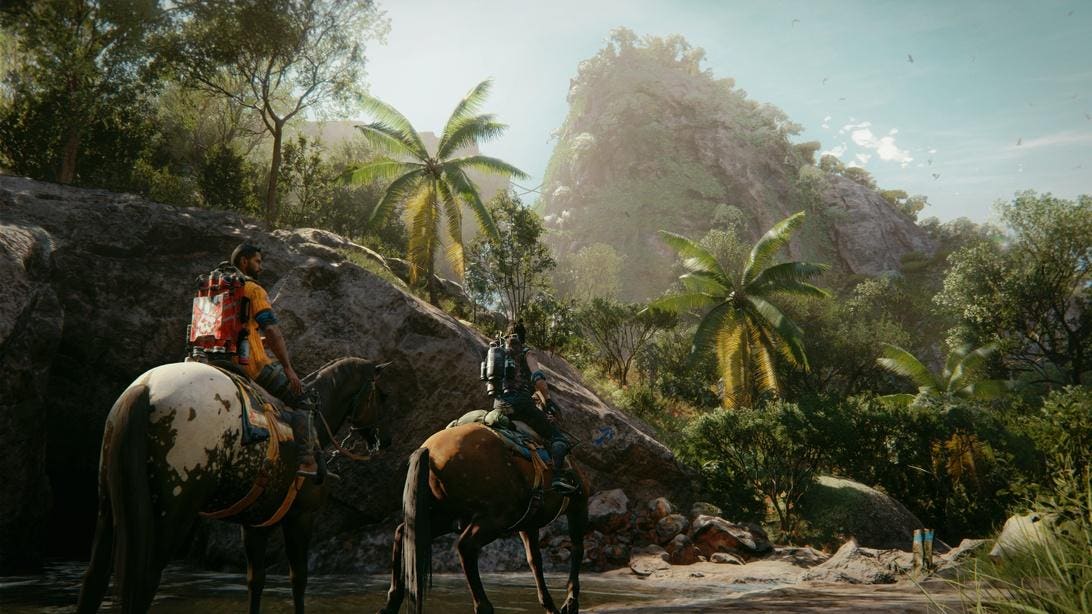 This bad boy is essentially a supercharged backpack you can upgrade with all kinds of goodies and abilities. This is where a good portion of your upgrades will go as you level up in Far Cry 6.

To begin with, you’ll have access to a barrage of rockets which is great for taking out a handful of enemies in one big swoop. You’ll have the option of upgrading to EMP blasts to stun enemies and just straight-up setting fire to your surroundings. These abilities will work on a cooldown timer, so you’ll have to wait for them to recharge after letting them rip. 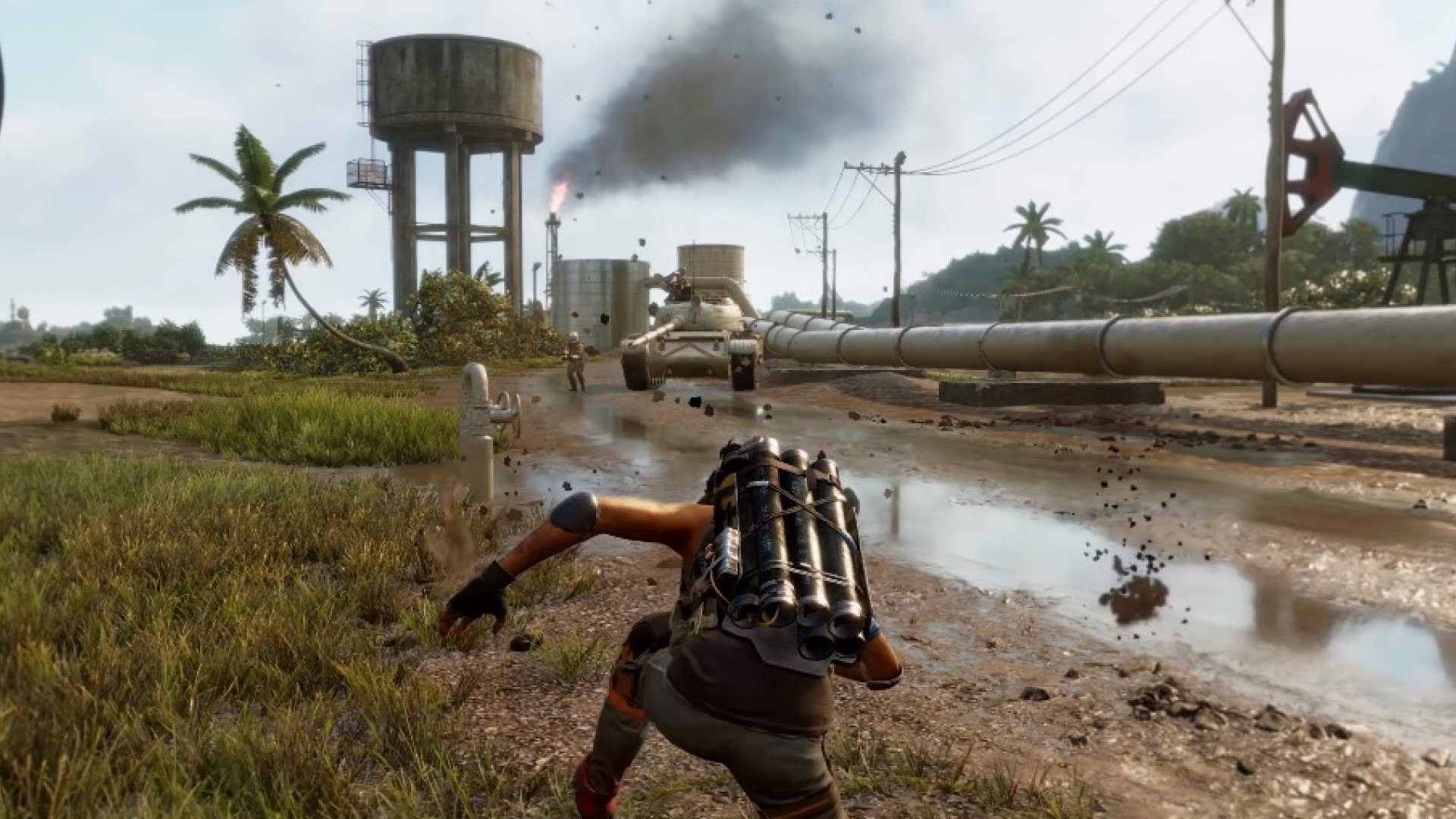 There are a ton of options available throughout the game, so you’ll certainly be able to tailor the Supremo to your unique playstyle.

You’ll have access to some fairly standard guns throughout the first section of Far Cry 6, but when you start upgrading them, things get interesting. The resistance doesn’t have a helluva lot of gear, so they have to make do with what they have.

This means you’ll be using car scraps as silencers and fashioning all sorts of weapons out of everyday objects. For example, there’s the Macarena gun, which, I shit you not, fires CD copies of the Los Del Rio hit song ‘Macarena‘. Sensational gear.

Honestly, this is just the tip of the iceberg when it comes to the absolutely insane gear you’ll be using in Far Cry 6. You’ll be able to see for yourself when the game drops on October 7 on Xbox and PC.